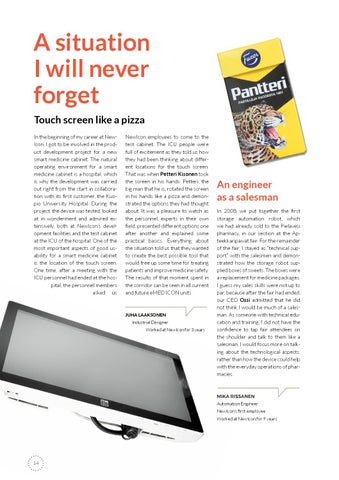 A situation I will never forget Touch screen like a pizza In the beginning of my career at New­ Icon, I got to be involved in the product development project for a new smart medicine cabinet. The natural operating environment for a smart medicine cabinet is a hospital, which is why the development was carried out right from the start in collaboration with its first customer, the Kuopio University Hospital. During the project, the device was tested, looked at in wonderment and admired extensively, both at NewIcon’s development facilities and the test cabinet at the ICU of the hospital. One of the most important aspects of good usability for a smart medicine cabinet is the location of the touch screen. One time, after a meeting with the ICU personnel had ended at the hospital, the personnel members asked us

NewIcon employees to come to the test cabinet. The ICU people were full of excitement as they told us how they had been thinking about different locations for the touch screen. That was when Petteri Kisonen took the screen in his hands. Petteri, the big man that he is, rotated the screen in his hands like a pizza and demonstrated the options they had thought about. It was a pleasure to watch as the personnel, experts in their own field, presented different options one after another and explained some practical basics. Everything about the situation told us that they wanted to create the best possible tool that would free up some time for treating patients and improve medicine safety. The results of that moment spent in the corridor can be seen in all current and future eMED ICON units.

Worked at NewIcon for 3 years

An engineer as a salesman In 2008, we put together the first storage automation robot, which we had already sold to the Pielavesi pharmacy, in our section at the Apteekkaripäivät fair. For the remainder of the fair, I stayed as “technical support” with the salesmen and demonstrated how the storage robot supplied boxes of sweets. The boxes were a replacement for medicine packages. I guess my sales skills were not up to par, because after the fair had ended, our CEO Ossi admitted that he did not think I would be much of a salesman. As someone with technical education and training, I did not have the confidence to tap fair attendees on the shoulder and talk to them like a salesman. I would focus more on talking about the technological aspects, rather than how the device could help with the everyday operations of pharmacies.