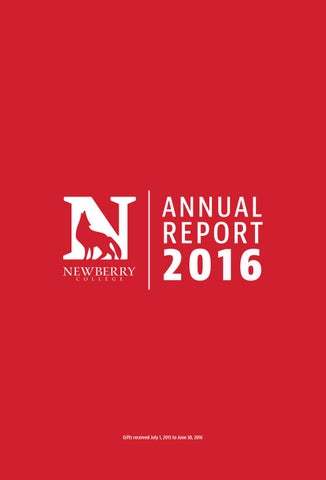 Our Year in Fundraising

1 Campaign 6 Capital Projects $35 Million Goal When Newberry College launched Scaling the Summit, we embarked on the first comprehensive campaign in College history. We set a bold goal of raising $35 million to support construction and renovation projects, grow the endowment and increase annual giving. As we near the halfway point to our goal, weâ&amp;#x20AC;&amp;#x2122;ve completed the first climb in our campaign and set our sights on the next ascent. PHASE I

Newberry completes the first of six campaign projects When guests attended the groundbreaking ceremony for Speers Street School revitalization project last spring, they took one look at the interior and said, “How will you possibly turn THIS (derelict building) into THAT (beautiful new home for the Center for Teacher Education?) It was definitely a tall order, but the West Construction crew worked day and night with Newberry’s Plant Operations team, led by Fred Errigo, to have the building ready for occupancy in time for fall semester classes. “The project cost more than anticipated but the entire $3.5 million construction budget was paid for through fundraising,” said Scott Joyner, Vice President for Advancement. “The construction loan has already been repaid. Not only is that great news for the College’s budget, but it lets us turn our focus to the next projects in phase one of the campaign.” 2

The old auditorium has been transformed into a versatile, multi-purpose event space for larger groups that has already hosted numerous meetings, workshops and lectures.

The Dufford Diversity Lab has quickly become a popular programming space. It also includes an archives room and rotating exhibit on its namesake, Dr. William Dufford.

Along with well-equipped classrooms, the lounge gives students a comfortable place to meet and study.

The next projects on the Scaling the Summit campaign

Science, Math, Art And Nursing Newberry College has experienced tremendous growth in its science and math majors and recently expanded the nursing program to accommodate sustained interest in that major. The project places greater emphasis on STEM education and healthcare fields expands opportunities for students to prepare for rewarding, in-demand careers.

Stadium Village The stadium renovation and athletic village construction project supports the ongoing success of our athletic programs. This much-needed and eagerly anticipated addition to campus will help us meet the needs of current learners and athletes, and position the College for future growth.

A Night With Our Pros Fundraising efforts for Stadium Village got a jumpstart at “A Night with Our Pros,” a special event that welcomed back former Wolves turned NFL pros. Brandon Bostick, Ron Parker, Edmond Robinson, Alstevis Squirewell and Corey Washington were joined by retired pros Rick Sargent and Herb Spencer to talk about their experiences and the preparation for success they got at Newberry College. The evening inspired an anonymous donor in attendance to issue a $2.5 million challenge gift. Combined other gifts and pledges, the Stadium Village project is more than a third of the way to its goal.

End of Year Fundraising Newberry College alumni and friends continue to support our goals for the future in record numbers. Both the total number of donors to the College and the size of their gifts increased during Fiscal Year 2016 [July 1, 2015 to June 30, 2016]. Gifts to the Annual Fund also reached an all-time high for Fiscal Year 2016.

Areas of Support With giving on the increase, where are the gifts going? A substantial portion of gifts support various elements of the comprehensive capital campaign. Unrestricted gifts to the Annual Fund and support for Athletics both were on par with last year. Following are cash gifts and gifts-in-kind received during the fiscal year.

The Heritage Society of Newberry College The Heritage Society is an association of individuals who, through a desire to assure the future strength of the institution, provide support through provisions in their estate plans. The name itself, Heritage, acknowledges the manner in which careful planning safeguards and protects the quality and character of Newberry College. Planned gifts enable donors to preserve their assets during their lifetime while leaving a valuable legacy to Newberry College. No legacy could be as lasting as one that guarantees the kind of learning our students enjoy during their years at Newberry College and no investment could be as rich in its ultimate return. The Heritage Society gathers together once a year in December. For more information, please contact Jason Boice 803.321.5694 or jason.boice@newberry.edu.

In Bequests and Other Planned Gifts Thank you to the members of the Heritage Society!

DON’T SEE YOUR NAME? If your name appears to have been omitted or you find your donation information is inaccurate in the Donor Honor Role, please check your records to verify that your gift was made during the 2015 fiscal year from July 1, 2015, to June 30, 2016. If your gift was received after this date, your name will be in next year’s Donor Honor Roll. We work hard to ensure the accuracy of our reporting and do our very best to ensure that all gifts are properly acknowledged. If we have, in fact, made a mistake, please let us know as soon as possible. We sincerely apologize. We cherish your friendship and thank you for your contributions. Please contact Sarah Dougherty with any corrections at sarah.dougherty@ newberry.edu or 803.321.5147.

Congregational Endowed Scholarships Newberry College would like to thank the many churches and individuals who have supported education through their endowed congregational scholarships. These scholarships not only assist in our recruiting efforts but also strengthen our ties to our Lutheran heritage and the Church.

Endowed Scholarships You make a difference. Endowed gifts are a vital source of permanent funds that make a Newberry College education possible for many worthy students. ENDOWED SCHOLARSHIPS aid in the recruitment and retention of students by supporting those who display academic promise, interest in a certain field of study and/or financial need. This enhanced ability to fund the costs of a Newberry College education will ensure an academically competitive student body. ENDOWED CHAIRS support the research and teaching of exceptional faculty and aid in recruiting and retaining scholars with national and international reputations of excellence. Fund an endowment. Establishing an endowed fund is one of the most enduring and meaningful ways an individual or an organization can make a difference at Newberry College. If you have questions or are interested in establishing an endowment, please contact the Office of Institutional Advancement at 803.321.5147.

Ways to Give CASH GIFTS

www.newberry.edu/giving or 803.321.5147 Outright gifts can be made via check or credit card. For your convenience, you can give online at Newberry College’s secure giving site, www.newberry.edu/giving, or you can make a credit card gift over the phone by calling 803.321.5147. Mail your gift to the Office of Institutional Advancement, where all charitable contributions to the College are processed. GIFT OF STOCKS, BONDS OR OTHER SECURITIES

jason.boice@newberry.edu or 803.321.5694 Gifts of appreciated stocks, bonds or other securities allow you to make a substantial gift to Newberry College at minimal cost. You will receive a tax deduction based on the value of the security on the date of the gift. With long-term appreciated securities (those held longer than 12 months), you will receive a charitable income tax deduction for the full fair-market value of your gift and avoid paying capital gains tax on the appreciation. Once given to the College, we will sell for the benefits. MATCHING GIFTS

sarah.dougherty@newberry.edu or 803.321.5147 You could double or triple your annual gift to Newberry if you or your spouse works for or has retired from a company with a matching gift program. Complete a matching gift form from your human resources office and send it in with your gift. We will take care of the rest. Enter your employer’s name in the box on our matching gift site to find out if your company or organization participates in a matching gift program. ESTATE AND OTHER PLANNED GIFTS

jason.boice@newberry.edu or 803.321.5694 By including Newberry College in your will or making other planned gifts, you can provide for yourself and your loved ones, plan wisely for your future, and make a meaningful gift to Newberry. Planned gifts enable you to preserve your assets during your lifetime and leave a valuable legacy at Newberry. Donors who make estate and other planned gifts are recognized as members of The Heritage Society, the College’s planned giving society.

scott.joyner@newberry.edu or 803.321.5617 Gifts of real estate are an excellent way to make a difference in the lives of Newberry College students and lower your tax liability at the same time. Gifts of property or a percentage of property may help you avoid paying capital gains tax, lower your current income tax and reduce your future federal estate taxes. Real estate gifts may increase your income if they are structured through a life income gift. You may also deed property, including vacation homes, to Newberry while retaining the lifetime right to occupy the property. Gifts of real estate must meet certain criteria and be approved by Newberry College’s Board of Trustees. INSURANCE

jason.boice@newberry.edu or 803.321.5694 A new or old insurance policy may be an appropriate way to make a gift to Newberry College for future endowment priorities. Gifts of insurance will not be accepted for capital or current programming needs; only permanent life insurance policies, i.e., whole life or universal life, are accepted as gifts. You can fund a new policy naming Newberry College as beneficiary, or you can name Newberry College as beneficiary of an existing policy. For each policy, provisions must be made to cover future premium payments. If you transfer ownership of the policy to Newberry College, all future premium payments are tax-deductible. Newberry College will only undertake the responsibility of making premium payments if the donor makes gifts to the college equal to the payments. If such gifts cease, the college will convert the policy to its cash value. As with any financial decision, you should consult your CPA, attorney and other financial advisors. 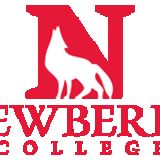