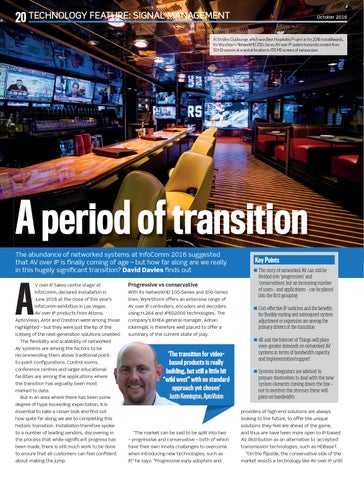 A period of transition The abundance of networked systems at InfoComm 2016 suggested that AV over IP is ﬁnally coming of age – but how far along are we really in this hugely signiﬁcant transition? David Davies ﬁnds out

V over IP takes centre stage’ at InfoComm, declared Installation in June 2016 at the close of this year’s InfoComm exhibition in Las Vegas. AV over IP products from Atlona, AptoVision, AMX and Crestron were among those highlighted – but they were just the tip of the iceberg of the next-generation solutions unveiled. The ﬂexibility and scalability of networked AV systems are among the factors to be recommending them above traditional pointto-point conﬁgurations. Control rooms, conference centres and larger educational facilities are among the applications where the transition has arguably been most marked to date. But in an area where there has been some degree of hype exceeding expectation, it is essential to take a closer look and ﬁnd out how quite far along we are to completing this historic transition. Installation therefore spoke to a number of leading vendors, discovering in the process that while signiﬁcant progress has been made, there is still much work to be done to ensure that all customers can feel conﬁdent about making the jump.

Progressive vs conservative With its NetworkHD 100-Series and 200-Series lines, WyreStorm offers an extensive range of AV over IP controllers, encoders and decoders using H.264 and JPEG2000 technologies. The company’s EMEA general manager, Adrian Ickeringill, is therefore well placed to offer a summary of the current state of play.

‘The transition for videobased products is really building, but still a little bit “wild west” with no standard approach yet chosen’ Justin Kennington, AptoVision

“The market can be said to be split into two – progressive and conservative – both of which have their own innate challenges to overcome when introducing new technologies, such as IP,” he says. “Progressive early adopters and

Key Points   The story of networked AV can still be divided into ‘progressives’ and ‘conservatives’, but an increasing number of users – and applications – can be placed into the first grouping   Cost-effective IP switches and the benefits for flexible routing and subsequent system adjustment or expansion are among the primary drivers of the transition   4K and the Internet of Things will place even-greater demands on networked AV systems in terms of bandwidth capacity and implementation/support   Systems integrators are advised to prepare themselves to deal with the new system elements coming down the line – not to mention the stresses these will place on bandwidth providers of high-end solutions are always looking to the future, to offer the unique solutions they feel are ahead of the game, and thus are have been more open to IP-based AV distribution as an alternative to ‘accepted’ transmission technologies, such as HDBaseT. “On the ﬂipside, the conservative side of the market resists a technology like AV over IP until