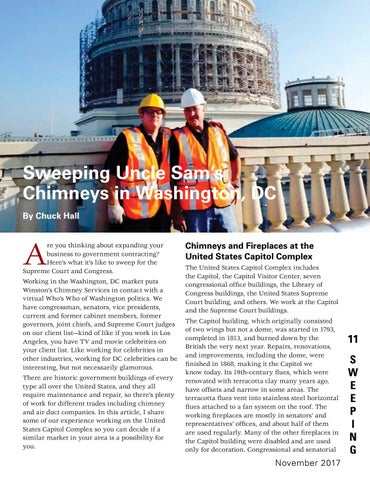 re you thinking about expanding your business to government contracting? Here’s what it’s like to sweep for the Supreme Court and Congress. Working in the Washington, DC market puts Winston’s Chimney Services in contact with a virtual Who’s Who of Washington politics. We have congressman, senators, vice presidents, current and former cabinet members, former governors, joint chiefs, and Supreme Court judges on our client list—kind of like if you work in Los Angeles, you have TV and movie celebrities on your client list. Like working for celebrities in other industries, working for DC celebrities can be interesting, but not necessarily glamorous. There are historic government buildings of every type all over the United States, and they all require maintenance and repair, so there’s plenty of work for different trades including chimney and air duct companies. In this article, I share some of our experience working on the United States Capitol Complex so you can decide if a similar market in your area is a possibility for you.

Chimneys and Fireplaces at the United States Capitol Complex The United States Capitol Complex includes the Capitol, the Capitol Visitor Center, seven congressional office buildings, the Library of Congress buildings, the United States Supreme Court building, and others. We work at the Capitol and the Supreme Court buildings. The Capitol building, which originally consisted of two wings but not a dome, was started in 1793, completed in 1813, and burned down by the British the very next year. Repairs, renovations, and improvements, including the dome, were finished in 1868, making it the Capitol we know today. Its 19th-century flues, which were renovated with terracotta clay many years ago, have offsets and narrow in some areas. The terracotta flues vent into stainless steel horizontal flues attached to a fan system on the roof. The working fireplaces are mostly in senators’ and representatives’ offices, and about half of them are used regularly. Many of the other fireplaces in the Capitol building were disabled and are used only for decoration. Congressional and senatorial 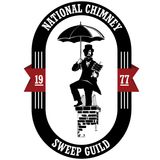