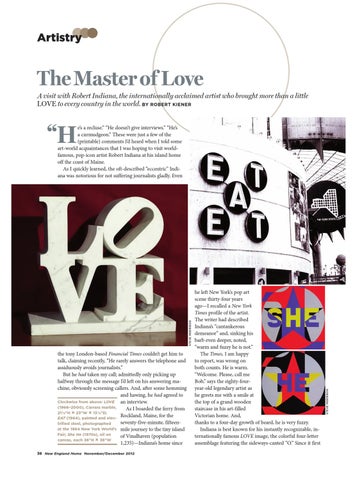 The Master of Love A visit with Robert Indiana, the internationally acclaimed artist who brought more than a little LOVE to every country in the world. BY ROBERT KIENER

the tony London-based Financial Times couldn’t get him to talk, claiming recently, “He rarely answers the telephone and assiduously avoids journalists.” But he had taken my call; admittedly only picking up halfway through the message I’d left on his answering machine, obviously screening callers. And, after some hemming and hawing, he had agreed to Clockwise from above: LOVE an interview. (1966–2000), Carrara marble, As I boarded the ferry from 21½"H × 23"W × 13¼"D; Rockland, Maine, for the EAT (1964), painted and elecseventy-five-minute, fifteentrified steel, photographed at the 1964 New York World’s mile journey to the tiny island Fair; She He (1970s), oil on of Vinalhaven (population canvas, each 36"H × 36"W 1,235)—Indiana’s home since 36 New England Home November/December 2012

he left New York’s pop art scene thirty-four years ago—I recalled a New York Times profile of the artist. The writer had described Indiana’s “cantankerous demeanor” and, sinking his barb even deeper, noted, “warm and fuzzy he is not.” The Times, I am happy to report, was wrong on both counts. He is warm. “Welcome. Please, call me Bob,” says the eighty-fouryear-old legendary artist as he greets me with a smile at the top of a grand wooden staircase in his art-filled Victorian home. And, thanks to a four-day growth of beard, he is very fuzzy. Indiana is best known for his instantly recognizable, internationally famous LOVE image, the colorful four-letter assemblage featuring the sideways-canted “O.” Since it first

e’s a recluse.” “He doesn’t give interviews.” “He’s a curmudgeon.” These were just a few of the (printable) comments I’d heard when I told some art-world acquaintances that I was hoping to visit worldfamous, pop-icon artist Robert Indiana at his island home off the coast of Maine. As I quickly learned, the oft-described “eccentric” Indiana was notorious for not suffering journalists gladly. Even