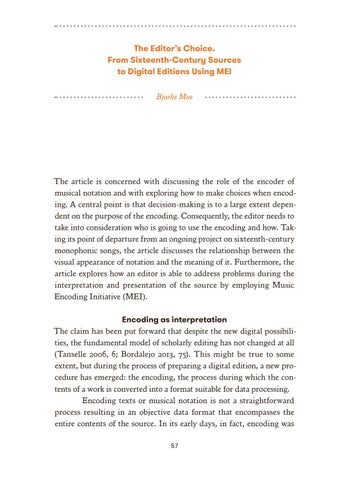 The article is concerned with discussing the role of the encoder of musical notation and with exploring how to make choices when encoding. A central point is that decision-making is to a large extent depen­ dent on the purpose of the encoding. Consequently, the editor needs to take into consideration who is going to use the encoding and how. Taking its point of departure from an ongoing project on sixteenth-century monophonic songs, the article discusses the relationship between the visual appearance of notation and the meaning of it. Furthermore, the article explores how an editor is able to address problems during the interpretation and presentation of the source by employing Music Encoding Initiative (MEI). Encoding as interpretation The claim has been put forward that despite the new digital possibilities, the fundamental model of scholarly editing has not changed at all (Tanselle 2006, 6; Bordalejo 2013, 75). This might be true to some extent, but during the process of preparing a digital edition, a new procedure has emerged: the encoding, the process during which the contents of a work is converted into a format suitable for data processing. Encoding texts or musical notation is not a straightforward process resulting in an objective data format that encompasses the entire contents of the source. In its early days, in fact, encoding was 57 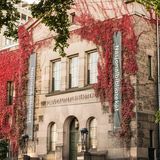 Notated Music in the Digital Sphere

"Notated Music in the Digital Sphere: Possibilities and Limitations" explores the different research areas of notated music in a digital set...

Notated Music in the Digital Sphere

"Notated Music in the Digital Sphere: Possibilities and Limitations" explores the different research areas of notated music in a digital set...