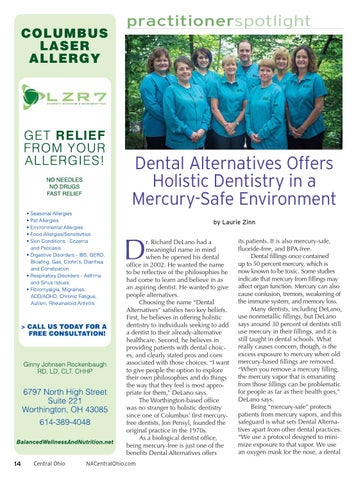 r. Richard DeLano had a meaningful name in mind when he opened his dental office in 2002. He wanted the name to be reflective of the philosophies he had come to learn and believe in as an aspiring dentist. He wanted to give people alternatives. Choosing the name “Dental Alternatives” satisfies two key beliefs. First, he believes in offering holistic dentistry to individuals seeking to add a dentist to their already-alternative healthcare. Second, he believes in providing patients with dental choices, and clearly stated pros and cons associated with those choices. “I want to give people the option to explore their own philosophies and do things the way that they feel is most appropriate for them,” DeLano says. The Worthington-based office was no stranger to holistic dentistry since one of Columbus’ first mercuryfree dentists, Jon Pensyl, founded the original practice in the 1970s. As a biological dentist office, being mercury-free is just one of the benefits Dental Alternatives offers

its patients. It is also mercury-safe, fluoride-free, and BPA-free. Dental fillings once contained up to 50 percent mercury, which is now known to be toxic. Some studies indicate that mercury from fillings may affect organ function. Mercury can also cause confusion, tremors, weakening of the immune system, and memory loss. Many dentists, including DeLano, use nonmetallic fillings, but DeLano says around 30 percent of dentists still use mercury in their fillings, and it is still taught in dental schools. What really causes concern, though, is the excess exposure to mercury when old mercury-based fillings are removed. “When you remove a mercury filling, the mercury vapor that is emanating from those fillings can be problematic for people as far as their health goes,” DeLano says. Being “mercury-safe” protects patients from mercury vapors, and this safeguard is what sets Dental Alternatives apart from other dental practices. “We use a protocol designed to minimize exposure to that vapor. We use an oxygen mask for the nose, a dental