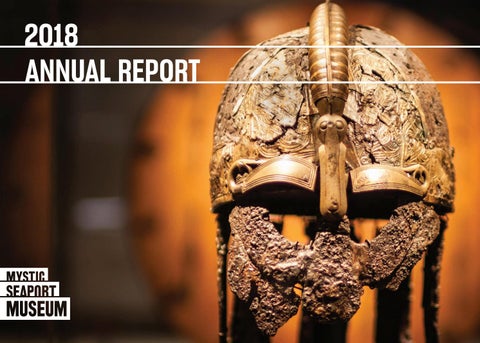 A MESSAGE FROM STEPHEN C. WHITE PRESIDENT AND CEO When I began my tenure at Mystic Seaport Museum 10

years ago, the recession was in full force and the

the exhibitions as learning tools and inspiration. As an

future was uncertain. From those days, rose a revitalized

community featuring the completion of the restoration of

weekend engaging visitors from the Shipyard to the

the Charles W. Morgan, her 38th Voyage, the planning and

building of the McGraw Gallery Quadrangle and the

Begin exhibition itself. The Seaport After 7 inaugural event,

Thompson Exhibition Building, and the launch of the

a Viking Beer Garden, was popular, attracting a younger

subsequent Era of Exhibitions. The impact of the global

demographic despite cold and rainy weather. Arts on the

economic crisis had been significant, but the Museum

demonstrated its resolve and responded well to the

related performances and experiences on the cool

grass of the McGraw Quadrangle.

Now, at the end of 2018, thanks to the extraordinary hard

With a colorful splash, Mystic Seaport returned to being

work, generosity, and vision of the Mystic Seaport Museum

staff and extended community, we have achieved the

goals set out in the 2009 Strategic Plan and then some.

celebrates our “museum-ness,” and connects us more

Not only did we restore and sail the Morgan, as well as

directly with the contemporary world. Further, the Board

plan, build, and open the Thompson Building, but then in

of Trustees adopted a new vision statement that states

2018, we presented five special exhibitions, rolled out a

that the Museum will reimagine the interchange between

continued to host the Museum’s beloved annual events, and expanded our educational offerings.

The 2019 season promises more excitement and wonder: the summer exhibition, Streamlined: From Hull to Home,

us forward and has enhanced our business model. With

surprises; the Mayflower II launch in September; and an

unprecedented exhibition of the watercolors of J.M.W.

Vinland Map, and Death in the Ice, our members revisited

Turner in October, all from the unparalleled collection of

the Museum in numbers exceeding recent standards. Both

Tate, London. We hope these special experiences will entice new visitors to come to the Museum while keeping our friends and members returning. We are deeply grateful to our members and donors who supported the Museum this year. Through their contributions and the visionary leadership and generosity of our Board of Trustees, we have realized and enjoyed the accomplishments of the last 10 years. Their belief in the Museum and their unwavering support have inspired us to greater heights and expanded and broadened our role in the national conversation. Lastly, it is with deep appreciation and respect that we see the six-year term of our Board Chairman, J. Barclay Collins, II, come to an end. His extraordinary leadership has nurtured a culture of philanthropy that now permeates every aspect of the Museum. We are deeply grateful for his service, and we will miss his passionate hand at the helm.

A MESSAGE FROM J.BARCLAY COLLINS, II CHAIRMAN OF THE BOARD This is my final Annual Report letter to you as Chairman

It has been a privilege, and a great honor, to lead our

of the Board of Trustees of Mystic Seaport Museum, and

highly engaged and passionately committed Board of

I must say it has been a joyous six years for me, leading

Trustees, women and men who have acted wisely and

an engaged board and collaborating with the finest staff

strategically these past years to guide forward the

imaginable. My tenure ends on a high note, as we conclude

mission of our Museum and who are deeply philanthropic

the first full year of our Era of Exhibitions, with the

towards Mystic Seaport Museum. They have given most

fabulous Turner exhibition opening in October, and as

generously of their time, their talents and their treasure,

we celebrate a year of excellence in all our education,

and have reached out to inspire and encourage others to join

in their philanthropy. I have served on many non-profit

school on the waterfront, to a succession of scholarly

boards, big and small, over the years, and I can say

symposia surrounding our exhibitions, and to the world-

without reservation that this is the finest.

class exhibitions themselves. I am immensely proud of the many milestones we have achieved during my tenure at the helm, milestones laid out in part by the foresight of my predecessors: Being on board the Charles W. Morgan, as she made her way up the Mystic River to home after her exciting six-week 38th Voyage, the joyous weekend of celebration surrounding the opening of the Thompson Exhibition Building, highlighted by an amazing address by Wade Thompson’s daughter, Amanda; these are memories I will never forget. And I am particularly gratified by the growth in philanthropy: our successful Museum in Motion Campaign, the Era of Exhibitions campaign, in progress and on target, and the significant increase in Annual Fund support, spearheaded by our trustees, all this under the leadership of a crack Advancement team.

The substantial support which our trustees give to our Museum, added to the very generous support of each of you, vitally sustains our operations each year and allows us to preserve and restore historic vessels of great significance, mount exhibitions of “you must see it” stature, and save and share our world-class collection of maritime art and artifacts. So, my hat is off, with three cheers, for all my fellow trustees, and all of you. Our trustees, like a number of you, have also been farsighted about our future as an institution, making planned gifts that ensure the Museum will thrive long after we are gone, touching the lives of visitors far into the future. During my tenure, I have spent several weeks each summer in residence at the Museum, at the dock, on

board my classic sailing ketch, India, watching my grandchildren grow from young boys to teenagers, building confidence and new skills as they progressed through the programs of our sailing school. I have watched the wonder in their faces and those of their new friends, as they encountered and were mesmerized by the work of the â&#x20AC;&#x153;smithy,â&#x20AC;? or watched in awe sailors scramble up the rigging of the Morgan. Their experiences at Mystic Seaport Museum will have a lifelong impact on their character; that alone is worth every minute of time and investment I have made in this great institution. I want to thank each of my fellow trustees for their support during my chairmanship. I thank each member of our amazing staff, whose dedication and energy brings the Museum to life every day. And I want to thank each of you, who love this place and have donated so generously in support. You are keeping our maritime heritage alive and relevant and accessible to new generations, helping to share the magic that is Mystic Seaport Museum.

ALL OTHERS BROKEN DOWN

$12.2 million represents funds raised in 2018 for purposes with restrictions and without restrictions.

MYSTIC SEAPORT MUSEUM AT A GLANCE VISITORS AND MEMBERS

32,000 students and adults served by the Education Department

Over 1.5 million feet of film footage Over 1.3 million photographs; one of the largest maritime photographic archives in North America Over 1 million pieces in our manuscript collection, including 1,500 logbooks, journals, ledgers, and diaries 200,000 sheets of naval architecture drawings 75,000 books Over 10,000 nautical charts and maps dating from 1650 to the present 5,800 paintings, drawings, and prints 2000 ship models 1,400 pieces of scrimshaw 1,100 nautical instruments 550 oral histories 520 watercraft dating from 1824 to the present 150 Munson Institute lectures and sound recordings from 1960 to the present 75 figureheads dating from 1800 to the present

THE AMERICA AND THE SEA SOCIETY 2018 ANNUAL FUND

(Gifts received from January 1, December 31, 2018) Gifts at the America and the Sea Society level have a tremendous philanthropic impact on every program museum-wide. Support to this leadership gift society reflects a deep commitment to the vitality of Mystic Seaport Museum and is an affirmation of our mission to preserve our maritime heritage for the benefit of future generations.

OTHER GIFTS TO THE 2018 ANNUAL FUND

DONATIONS TO OTHER FUNDS

(Gifts received from January 1, December 31, 2018) There are a variety of ways to support Mystic Seaport Museum. The donors listed below have given generously to one of the Museum’s many specific programs such as our collections, endowments, exhibits, events, and other significant enrichment that helps keep Mystic Seaport Museum the nation’s leading maritime museum.

In 1938, Mystic Seaport Museum (then the Marine Historical Association) received a generous bequest from the Estate of Dr. Charles K. Stillman, one of the Museum’s three founders. As the first bequest to the Museum, this significant gesture helped to establish an endowment for the Museum’s programs and future operations. It also began what has become a tradition of planned giving at Mystic Seaport Museum. Since then, a great many individuals have made generous gifts to the Museum in their wills or estate plans. In order to recognize their generosity, Mystic Seaport Museum has established the Stillman Society, named in honor of the Museum’s early benefactor. Mystic Seaport Museum is pleased to recognize these special donors during their lifetimes, not only to acknowledge their generosity personally, but to celebrate the role the Stillman Society plays in the growth and development of the Museum. If you believe that you qualify for membership and would like to add your name to our list, please contact the Advancement Department at 860.572.5365 or advancement@mysticseaport.org Anonymous (3) Rufus Allyn and Roy N. Bohlander Joan A. Altgelt Harold C. Appleton Kenneth D. Appleton, USCGR Charlotte Appleton Robert and Linda Z. Armes

Mystic Seaport Museum is grateful for the gifts received from January 1, 2018 – December 31, 2018. Every effort has been made to correctly reflect the generosity of our donors. Please bring errors or omissions to the attention of our Advancement office at 860.572.5365 or advancement@mysticseaport.org

DURING OUR LIVES, THROUGH WORD AND DEED WE LEAVE OUR IMPRINT ON THE INDIVIDUALS AND INSTITUTIONS ABOUT WHICH WE CARE DEEPLY 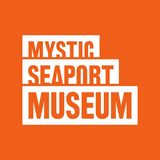