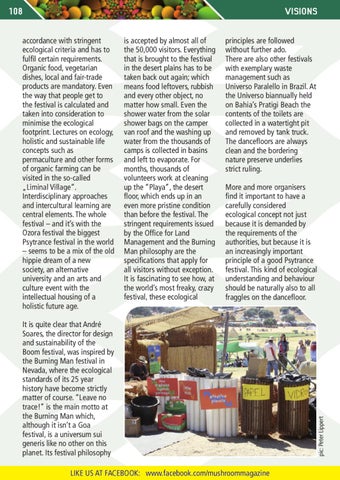 VISIONS is accepted by almost all of the 50,000 visitors. Everything that is brought to the festival in the desert plains has to be taken back out again; which means food leftovers, rubbish and every other object, no matter how small. Even the shower water from the solar shower bags on the camper van roof and the washing up water from the thousands of camps is collected in basins and left to evaporate. For months, thousands of volunteers work at cleaning up the “Playa”, the desert floor, which ends up in an even more pristine condition than before the festival. The stringent requirements issued by the Office for Land Management and the Burning Man philosophy are the specifications that apply for all visitors without exception. It is fascinating to see how, at the world’s most freaky, crazy festival, these ecological

principles are followed without further ado. There are also other festivals with exemplary waste management such as Universo Paralello in Brazil. At the Universo biannually held on Bahia’s Pratigi Beach the contents of the toilets are collected in a watertight pit and removed by tank truck. The dancefloors are always clean and the bordering nature preserve underlies strict ruling. More and more organisers find it important to have a carefully considered ecological concept not just because it is demanded by the requirements of the authorities, but because it is an increasingly important principle of a good Psytrance festival. This kind of ecological understanding and behaviour should be naturally also to all fraggles on the dancefloor.

It is quite clear that André Soares, the director for design and sustainability of the Boom festival, was inspired by the Burning Man festival in Nevada, where the ecological standards of its 25 year history have become strictly matter of course. “Leave no trace!” is the main motto at the Burning Man which, although it isn’t a Goa festival, is a universum sui generis like no other on this planet. Its festival philosophy LIKE US AT FACEBOOK: www.facebook.com/mushroommagazine

accordance with stringent ecological criteria and has to fulfil certain requirements. Organic food, vegetarian dishes, local and fair-trade products are mandatory. Even the way that people get to the festival is calculated and taken into consideration to minimise the ecological footprint. Lectures on ecology, holistic and sustainable life concepts such as permaculture and other forms of organic farming can be visited in the so-called „Liminal Village“. Interdisciplinary approaches and intercultural learning are central elements. The whole festival – and it’s with the Ozora festival the biggest Psytrance festival in the world – seems to be a mix of the old hippie dream of a new society, an alternative university and an arts and culture event with the intellectual housing of a holistic future age. 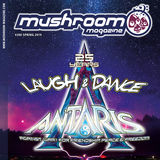