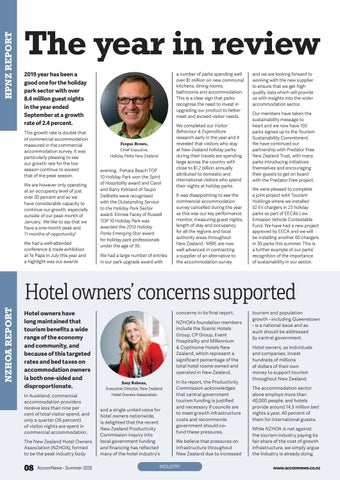 The year in review 2019 year has been a good one for the holiday park sector with over 8.4 million guest nights in the year ended September at a growth rate of 2.4 percent. This growth rate is double that of commercial accommodation measured in the commercial accommodation survey. It was particularly pleasing to see our growth rate for the low season continue to exceed that of the peak season. We are however only operating at an occupancy level of just over 20 percent and so we have considerable capacity to continue our growth, especially outside of our peak month of January. We like to say that we have a one-month peak and 11 months of opportunity! We had a well-attended conference & trade exhibition at Te Papa in July this year and a highlight was our awards

a number of parks spending well over $1 million on new communal kitchens, dining rooms, bathrooms and accommodation. This is a clear sign that parks recognise the need to invest in upgrading our product to better meet and exceed visitor needs.

evening. Pohara Beach TOP 10 Holiday Park won the Spirit of Hospitality award and Carol and Barry Kirkland of Taupo DeBretts were recognised with the Outstanding Service to the Holiday Park Sector award. Einnee Facey of Russell TOP 10 Holiday Park was awarded the 2019 Holiday Parks Emerging Star award for holiday park professionals under the age of 35. We had a large number of entries in our park upgrade award with

We completed our Visitor Behaviour & Expenditure research early in the year and it revealed that visitors who stay at New Zealand holiday parks during their travels are spending large across the country with close to $1.2 billion annually attributed to domestic and international visitors who spend their nights at holiday parks. It was disappointing to see the commercial accommodation survey cancelled during the year as this was our key performance monitor, measuring guest nights, length of stay and occupancy for all the regions and local authority areas throughout New Zealand. MBIE are now well advanced in contracting a supplier of an alternative to the accommodation survey

and we are looking forward to working with the new supplier to ensure that we get high quality data which will provide us with insights into the wider accommodation sector. Our members have taken the sustainability message to heart and we now have 150 parks signed up to the Tourism Sustainability Commitment. We have continued our partnership with Predator Free New Zealand Trust, with many parks introducing initiatives themselves and encouraging their guests to get on board with the Predator Free project. We were pleased to complete a joint project with Tourism Holdings where we installed 52 EV chargers in 23 holiday parks as part of EECA’s Low Emission Vehicle Contestable Fund. We have had a new project approved by EECA and we will be installing another 60 chargers in 30 parks this summer. This is a further example of our parks’ recognition of the importance of sustainability in our sector.

Hotel owners’ concerns supported Hotel owners have long maintained that tourism benefits a wide range of the economy and community, and because of this targeted rates and bed taxes on accommodation owners is both one-sided and disproportionate. In Auckland, commercial accommodation providers receive less than nine per cent of total visitor spend, and only a quarter (26 percent) of visitor nights are spent in commercial accommodation. The New Zealand Hotel Owners Association (NZHOA), formed to be the peak industry body

and a single united voice for hotel owners nationwide, is delighted that the recent New Zealand Productivity Commission inquiry into local government funding and financing has reflected many of the hotel industry’s

In its report, the Productivity Commission acknowledges that central government tourism funding is justified and necessary if councils are to meet growth infrastructure costs and recommends government should cofund these pressures. We believe that pressures on infrastructure throughout New Zealand due to increased

tourism and population growth - including Queenstown - is a national issue and as such should be addressed by central government. Hotel owners, as individuals and companies, invest hundreds of millions of dollars of their own money to support tourism throughout New Zealand. The accommodation sector alone employs more than 40,000 people, and hotels provide around 14.5 million bed nights a year, 40 percent of them for international guests. While NZHOA is not against the tourism industry paying its fair share of the cost of growth infrastructure, we simply argue the industry is already doing www.accomnews.co.nz 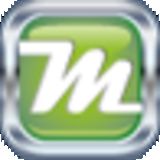