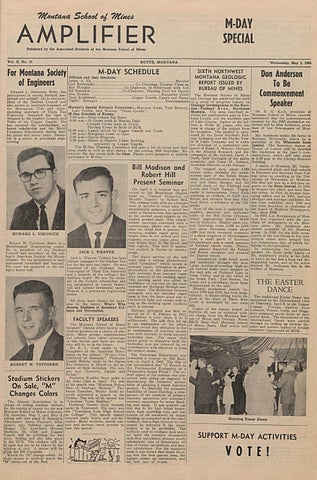 Officials and their functions: James A. Ek Marshal Carl Koskimaki Co-Chairman, Campus Clean-up Ray Hyyppa Co-Chairman, M-Whitewash with Ash Edward L. Simonich, Butte, has Ed Simonich Co..Chairman, Painting Steel for Stands participated in varsity football, bas- Don Hruska : Kangaroo Court ketball and softball. He is vice-pres- Dave Koskimaki.. Copper Guards, Lunch and Dance .ident of the Student Council and, &quot;Spike&quot; Donegan : : Entertainment also serves as secretary-treasurer of Awan, Tom Downey, the Monogram Club and corre- Marshal&#39;s Special Advisory Committee:-Manso~r Lalit Perekh, Jack Weaver, &quot;Those Co-eds.&quot; &#39;sponding secretary of Theta Tau &#39;Fraternity. Simonich has been a M-Day Schedule of Events: delegate to the Student Council, and 7 :00 a.m.-B last behind Big Butte. meet at Marcus Daly. Duke of the Copper Guards. He 8 :00 a.m.-M-Crews Campus Crews meet at Circle. .has . received fee scholarships, an Painting Crews in front of SUB. honor scholarship and the Mobil served by Copper Guards and Coeds. Company Scholarship during both 12:00 a.m.-Lunch 1 :00 p.m.-Kangaroo Court in Gym. his junior and senior years. SimonProgram. _ ich is a senior in petroleum engi- &#39;2:00 p.m.-Sports 9:00 p.m.-Dance in Student Union &#39;Building, neering. sponsored by Copper Guards. The M-Day Planning Committee will post a list of crews and their crew chiefs as well as their duties, for the coming 1965 festivities. Rememebr the day starts with the blast. Please come prepared to actively participate in M-Day.

Don. Anderson .To Be (ommen(emenl Speaker

From The Desk of The Student Body President

FRATERNITY NEWS , . . &#39;. Theta Tau A&#39; meeting -was held. Monday, April 26, &#39;to mike campaign posters for the M-Day elections. The Tau candidates are Dave Bennett, president; Mike Arne, vice-president; Jim Loomis, secretary·-treasurer; Bob Lehfeldt, delegate; Dave Koskimaki, delegate. Theta Tau&#39;s founder&#39;s Day will be May 7, and initiations will probably be the same day. &quot;Sigma Rho Fina&#39;l .plans ..for the, hayr idc were&#39; made at&#39; the April 22 meeting and the poster committee for the M-Day elections was assigned. A hayride was held April 23, at the Columbia Riding Club, after which a small party was held. . On Monday, April 26, the film &quot;Smelting and Refining of Nickle at Sunbury, Ontario&quot; was presented to the public. A joint meeting of the Sigma Rho and Theta Tau fraternities was held to plan the M-Day party on April 28. The Sigma Rho. candidates are&quot; Bill Thompson, president; Russ Bills, vice-president; Joe Caddy, secretary-treasurer; Henry McClernan, delegate; Charles Ljungberg, .ddegate.

President, Anderson-Carlisle Society (AIME) President, Junior Class Business Manager of Amplifier Honor Roll Married-one child Sigma Rho Junior in Mining Engineering &quot;Our primary interest is the promotion of MSM. The Sigma Rho fraternity has been very active in this promotion through the fraternity and wish to extend it via the student body as a whole.&quot;

It has been said that failure to recognize the key role of profits in our American free enterprise system may well be the greatest single threat our country faces.

A profitable company is an employee&#39;s best friend. The tools provided him are still his most important servant, and these are paid for from industry&#39;s profits.

Smart Styles For the Campus

He can no more take away adequate profits and have free enterprise left than&#39; we can take away the people&#39;s right to vote and have democracy left:

THE MQN.T~NA SCHOOl. OF MINES AMPLIFIER

The annual reception for high school senior girls who are planning to attend MSM this fall semester will be held May 2, in the Cop&#39;per Lounge. Chairmen for the event are Marg Berryman and Leona Harrison. Invitations&#39; are mailed to all high schools in this vicinity and surrounding cities. The high school girls are informed of the scholastic and social&#39; activities at MSM. Visit of MIA WS President Virginia Speck, from MSC, is the Montana Intercollegiate AWS President. Miss Speck will be visiting the MSM campus on May 13. At this time she will meet with the local A WS officers and become acquainted with the coeds.

AWS Picnic The A WS is planning to hold at picnic, tentatively on Sunday, May 16. A definite time and place has not been selected. Much fun should be had for all who attend.

The Grizzlies of MSU whitewashed the MSM team &#39;in the &#39;doubleheader played Tuesday, April 27. The games were cornposed &#39;Ofpitching feats by both teams. Oddy, Hoyt and DeMers of the Grizzlies held the Mines&#39; &#39;batters to four hits.&#39; The Orediggers&#39; Bill Hicks held the Grizzlies to six hits. MSlJ&#39; sc~red twice -in the first inning and three in the seventh. The Mines loaded the bases in the second and had base runners in the fourth, but neither instance&#39; materialized into a tally. Mysse led the University, hitting two for four, scoring, himself and batting in two. Tholstrom, Poole, Bussenius and Hanley tagged the four hits for the Orediggers. ,The opening game was shot through with errors on the part of the, MSM team. Of the eight runs scored hythe Grizzlies,&#39; only one was charged to Don Poole&#39; who piched an outstanding game. The Grizzlies, behind Mitchell, Bankhead and Murphy, held the Mines scoreless. The Mines totaled three hits, all by Ken Tholstrorn, who also had trouble handling the ball, com,mitting four errors at his third base &quot;hotspot&quot; position. MSU scored in the first, third, fourth and seventh frames. Neither team managed to &#39;tag extra base hits. The victories left Missoula with an eight and three record; five of six of the victories in the MCC were shut-outs. The loss left MSM with a zero and two record-these being the first two games. The Mines will now travel to Havre to meet the Diamondmen of Northern and Carroll.

State Officers Will Meet , The MIA WS, Executive Board meeting will begin&#39; Friday evening and continue until late Saturday affernoon on May 28 and 29, on the MSC campus. Kathy Verona, state corresponding secretary, and Rena Richards, a delegate from MSM on the state board, will be attending the meeting. The meeting will include discussion of the state newsletter, which is being written by Ka thy Verona and revising of the installation ceremony and planning business and activities for the ensuing year.

In theory&quot; the exact center by Mike Fredricksen, Sports Editor wheel does not turn. I have no need nor intention to put forth excuses .nor alibis for the Ethics will not necessarily losses attributed to the MSM track a person to heaven. and baseball teams. I do believe, however, that a few valid observations should be pointed .out. As we know, MSM is a comparitively small system and our ability is thus hampered by numbers. Our facilities (comparatively) are also lacking, including Mother Nature herself and her persistence to keep the teams bottled up indoors when outside field-practice is &#39;essential. The responsibilities and output of the men participating are large; the benefits are small. A large benefit would be strong backing&#39; by the MSM student body, as a whole, toward the teams. Despite victory or defeat, we should support the teams in the best interests of MSM.

Served In A Family Atmosphere Broadway at Hamilton

Everyone has his own definitions of what is exerting and fun, but at the School of Mines there are at least three boys who agree on what is the most thrilling pastime. Carl oKskirnaki, Dan Moilanen and Dave Bennett all maintain that sky diving is the most enticing and challenging pastime. If you were to have looked sky-ward on E Day, you would have seen these three brave men floating to the ground.

Statistics show that 156,000 women make a, full-time career of doorto-door selling and that&#39; half a million operate on a part time basis.

Keep Your Ca~ Safe I

Dave Bennett, a junior in engineering science, is the most experienced sky diver. He first started jumping in smoke jumping school in Missoula, after which he worked for two summers as a smoke jumper. Sky diving differs from smoke jumping, but Dave has made the transition well, and now jumps mainly for the sport. Carl Koskimaki, a senior in engineering science, became interested in sky diving and learned the fundamentals from Bennett. His jump on E Day provided him with quite a scare when he had trouble opening his chute. Dan Moilanen, a sophomore â&amp;#x20AC;˘ general student, started jumping , when he attended the University last , year.

The annual indoor track meet was held on April 3, at the Montana State College Field House in Bozeman. Ten schools sent their track teams to Bozeman for the meet. In addition to the School of Mines there &#39;were teams from Idaho, Idaho State, Montana State, NMC, Eastern, Rocky,&#39; Carroll and WMC which were represented. Our School of Mines team, made up of Don Brunell, Ken Scherr, Curt Peterson, Francis Koskimaki, Ron &lt;Lowney and Barton Penny, was outmanned by the larger schols, but they did manage to grab fourth place in the mile relay. So far this spring our track enthusiasts haven&#39;t had the weather needed for working themselves into shape, Later this season, with &#39;more practice under their belts, our team is expected to show very well. 60 yard dash Ron Lowney, Creighton Barry. 300 yard dash Ron Lowney, Creighton Barry. 440 yards - Frank Koskimaki, Ken Scherr. 880 yards Don Brunell, Ken Scherr, Frank Koskimaki. 1 mile-Don Brunell. I mile relay Brunell Scherr, Koskimaki, Curt Peterson. &#39; Pole Vault - Barry, Dan Piazzola. Discus-Javeline - Barton Penny.

WHAT RED and And Saves

ORDER OF THE GOLDEN RULE