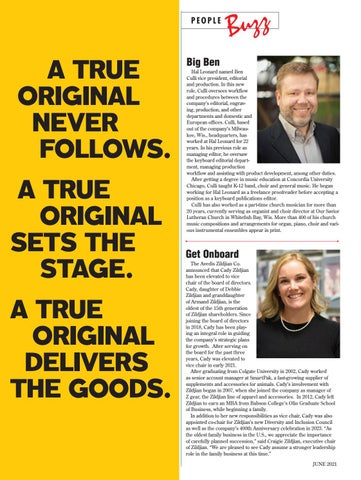 Hal Leonard named Ben Culli vice president, editorial and production. In this new role, Culli oversees workflow and procedures between the company’s editorial, engraving, production, and other departments and domestic and European offices. Culli, based out of the company’s Milwaukee, Wis., headquarters, has worked at Hal Leonard for 22 years. In his previous role as managing editor, he oversaw the keyboard editorial department, managing production workflow and assisting with product development, among other duties. After getting a degree in music education at Concordia University Chicago, Culli taught K-12 band, choir and general music. He began working for Hal Leonard as a freelance proofreader before accepting a position as a keyboard publications editor. Culli has also worked as a part-time church musician for more than 20 years, currently serving as organist and choir director at Our Savior Lutheran Church in Whitefish Bay, Wis. More than 400 of his church music compositions and arrangements for organ, piano, choir and various instrumental ensembles appear in print.

The Avedis Zildjian Co. announced that Cady Zildjian has been elevated to vice chair of the board of directors. Cady, daughter of Debbie Zildjian and granddaughter of Armand Zildjian, is the oldest of the 15th generation of Zildjian shareholders. Since joining the board of directors in 2018, Cady has been playing an integral role in guiding the company’s strategic plans for growth. After serving on the board for the past three years, Cady was elevated to vice chair in early 2021. After graduating from Colgate University in 2002, Cady worked as senior account manager at SmartPak, a fast-growing supplier of supplements and accessories for animals. Cady’s involvement with Zildjian began in 2007, when she joined the company as manager of Z gear, the Zildjian line of apparel and accessories. In 2012, Cady left Zildjian to earn an MBA from Babson College’s Olin Graduate School of Business, while beginning a family. In addition to her new responsibilities as vice chair, Cady was also appointed co-chair for Zildjian’s new Diversity and Inclusion Council as well as the company’s 400th Anniversary celebration in 2023. “As the oldest family business in the U.S., we appreciate the importance of carefully planned succession,” said Craigie Zildjian, executive chair of Zildjian. “We are pleased to see Cady assume a stronger leadership role in the family business at this time.” JUNE 2021