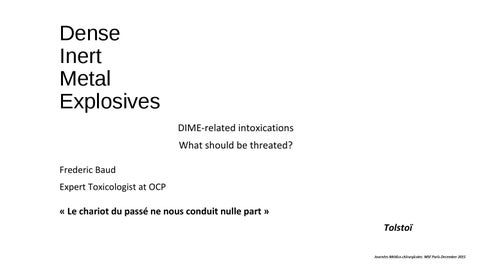 Chemicals elements and alloys used in military ammunitions 1 1. Lead remained for a while the metal the most widely used in ammunitions 2. As early as the 1950s, the U.S. military had used tungsten carbide in armor-piercing munitions. 3. Depleted uranium (DU) was once the metal of choice for U.S. military kinetic-energy munitions. DU saw its first widespread combat use in the First Persian Gulf War. 4. Today, the composition of weapons-grade tungsten alloy varies. DIME belongs to this later class of ammunitions. 5. White Phosphorus should be ever kept in mind as it has been commonly used in many conflicts owing to its ability to immediately and long-lasting ignition in contact with oxygen

Metals used in military ammunitions 2 What is Dense Inert Metal Explosive? • DIME weapons consist of a carbon fiber casing filled with a mixture of explosive and very dense microshrapnel, consisting of very small particles (1–2 mm) or powder of a mix of heavy metals. • To date, tungsten alloy (heavy metal tungsten alloy, or HMTA) composed of tungsten and other metals such as cobalt and nickel or iron has been the preferred materials for the dense microshrapnel or powder. • Two common HMTA are: • rWNiCo: tungsten (91–93%), nickel (3–5%) and cobalt (2–4%) • rWNiFe: tungsten (91–93%), nickel (3–5%) and iron (2–4%)

Comparison of injuries caused by DIME vs Conventional explosives

missiles (EARMs) have significantly elevated blood lead levels compared with matched controls. The occurrence of a bony fracture within the past 30 days is associated with a higher lead level. In 96% of patients with EARMs, elevated lead levels were not clinically significant and did not change patient management. Nguyen J Trauma Injury, Infection, and Critical Care 2005

Conclusions Release of metals from metals set within the body • There is a consistent body of knowledge supporting the assumption that intracorporeal elements and heavy metal alloys may slowly release elements. • As fas as we know, all elements may result in some release • However, significant release, as assessed by blood levels, is a a rare event in comparison with the number of individuals living with intracorporeal elements or alloys: far less than 5% of exposed individuals. • Case series highighted a number of factors increasing the likelihood of release

Systemic toxicity related to metal hip prostheses. Bradberry et al. Clin Toxicol (Phila). 2014; 52(8):837-47 One in eight of all total hip replacements requires revision within 10 years, 60% because of wear-related complications. The bearing surfaces may be made of cobalt/chromium, stainless steel, ceramic, or polyethylene. Friction between bearing surfaces and corrosion of non-moving parts can result in increased local and systemic metal concentrations.

Systemic toxicity related to metal hip prostheses. Bradberry et al. Clin Toxicol (Phila). 2014; 52(8):837-47 Bradberry et al propose the following criteria for assessing the likelihood that clinical features are related to cobalt toxicity: 1. Clinical effects consistent with the known neurological, cardiac, or thyroidal effects of cobalt, and for which any other explanation is less likely, 2. Increased blood cobalt concentrations (substantially higher than those in patients with wellfunctioning prostheses) several months after hip replacement, 3. After new hip replacement, a fall in the blood cobalt concentration, usually accompanied by signs of improvement in features. 4. When judged by these criteria, the systemic features in 10 of the reported cases are likely to be related to cobalt exposure from a metal-containing hip prosthesis

The diagnosis of heavy metal poisoning for intracorporeal foreign bodies The definitive diagnosis of heavy metal-induced poisoning requires to fill out a number of criteria, including: • A past history suggestive of exposure • Taking into account for any possible occupational, medicine-related, and household exposures • Any evidence of presence/exposure provided by body imaging • Signs and symptoms suggestive of the suspected heavy metal(s) • When available: increased levels of biomarkers of exposure • Assessment of the internal dose using either the blood and/or urine metal concentrations The French Consensus on the diagnosis of metal or metalloid poisoning and misuse of chelation. Toxicol Analyt Clin 2015

Experimental Toxicology in non-carcinogenic diseases Depleted Uranium • Renal dysfunction induced by long-term exposure to depleted uranium in rats (360 days in rats) Zhu et al Arch Toxicol 2009 • Evaluation of the Effect of Implanted Depleted Uranium (DU) on Adult Rat Behavior and Toxicological Endpoints: No behavioural effects but the concentration of uranium in urine directly correlated with the number of implanted DU pellets, indicating that DU was migrating into the body from the implanted pellets

Evaluation of the carcinogenic risks to humans associated with surgical implants and other foreign bodies Ă? a report of an IARC Monographs Programme Meeting

A meeting was held within the International Agency for Research on Cancer (IARC) Programme on the Evaluation of Carcinogenic Risks to Humans of surgical implants and other foreign bodies. Evaluations resulted in a classification of Group 2B (possibly carcinogenic to humans) for: (1) polymeric implants prepared as thin smooth films [with the exception of poly(glycolic acid)]; (2) metallic implants prepared as thin smooth films; and (3) implanted foreign bodies consisting of metallic cobalt, metallic nickel and a particular alloy powder consisting of 66Âą67% nickel, 13Âą16% chromium and 7% iron. Group 3 (not classifiable as to their carcinogenicity to humans) were made for: (1) organic polymeric materials as a group; (2) orthopaedic implants of complex composition and cardiac pacemakers; (3) silicone breast implants; (4) dental materials; and (5) ceramic implants.

• There is no valuable information about the Short-term effects as well as the Long-term effects of DIME explosives. Therefore, we cannot provide any definitive conclusion. • However, the cumulative experience resulting from long-term follow-up of foreign bodies, including splinters of grenade, gunshot as well as medical use of metal alloys in orthopedic surgery suggests: • Release of elemental metals from the foreign bodies may occur • This is a extremely rare adverse event of any implanted heavy metal, however. Local effects as well as systemic effects may result in: • Direct systemic toxicity • Carcinogenesis

The respective part of non-specific local inflammation and mutagenic, carcinogenic effect is a pending question of major relevancy in the carcinogenic process If suspected adverse effect, measurement of urine and/or blood heavy metal is an easy-toperform evidence of likelihood of toxicity and hazard

The last but not the least Great Thanks to the Paris Poison Control Centre, and more especially to Dr Antoine Villa Dr Jérôme Langrand For helping me in the bibliography and refining the presentation Thanks for your attention 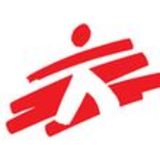