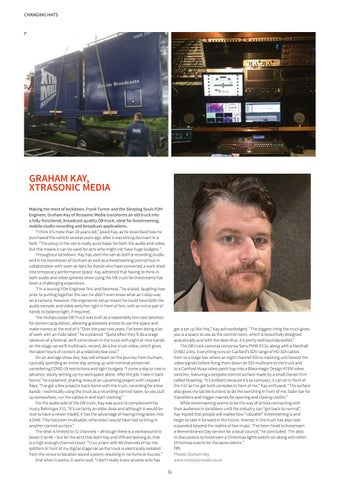 GRAHAM KAY, XTRASONIC MEDIA Making the most of lockdown, Frank Turner and the Sleeping Souls FOH Engineer, Graham Kay of Xtrasonic Media transforms an old truck into a fully-functional, broadcast-quality OB truck, ideal for livestreaming, mobile studio recording and broadcast applications. “I think it’s more than 20 years old,” joked Kay, as he described how he purchased the vehicle several years ago, after it was sitting dormant in a field. “The setup in the van is really quite basic for both the audio and video, but this means it can be used for acts who might not have huge budgets.” Throughout lockdown, Kay has used the van as both a recording studio and in his hometown of Durham as well as a livestreaming control hub in collaboration with team at Vans for Bands who have converted a work shed into temporary performance space. Kay admitted that having to think in both audio and video spheres when using the OB truck for livestreams has been a challenging experience. “I’m a touring FOH Engineer first and foremost,” he stated, laughing how prior to putting together the van, he didn’t even know what an f-stop was on a camera. However, the ergonomic setup meant he could have both the audio console and video switcher right in front of him, with an extra pair of hands to balance light, if required. The multipurpose OB Truck was built as a reasonably low-cost solution for content acquisition, allowing grassroots artists to use the space and make money at the end of it.“Over the past two years, I’ve been doing a lot of work with an indie label,” he explained. “Quite often they’ll do a stage takeover of a festival; we’ll come down in the truck with eight or nine bands on the stage, so we’ll multitrack, record, do a live truck video, which gives the label hours of content at a relatively low cost.” On an average show day, Kay will embark on the journey from Durham, typically spending an entire day setting up with minimal personnel considering COVID-19 restrictions and tight budgets. “I come a day or two in advance, slowly setting up my workspace alone. After the job, I take it back home,” he explained, sharing news of an upcoming project with Leopard Rays. “I’ve got a few projects back home with the truck, recording for a few bands – technically using the truck as a recording control room, so you pull up somewhere, run the cables in and start tracking.” For the audio side of the OB truck, Kay was quick to complement his trusty Behringer X32. “It’s certainly an older desk and although it would be nice to have a newer model, it has the advantage of having integration into a DAW. This has been invaluable, otherwise I would have had to bring in another control surface.” The desk is limited to 32 channels – although there is a workaround to boost it to 48 – but for the acts that both Kay and VFB are looking at, that is a high enough channel count. “I run a rack with 48 channels of iso mic splitters in front of my digital stage rac so the truck is electrically isolated from the venue or location sound system, resulting in no hums or buzzes.” And when it works, it works well. “I don’t really know anyone who has

got a set up like this,” Kay acknowledged. “The biggest thing the truck gives you is a space to use as the control room, which is beautifully designed acoustically and with the door shut, it’s pretty well soundproofed.” The OB truck cameras comprise Sony PMW-EX1s, along with a Marshall CV502 units. Everything runs on Canford’s SDV range of HD-SDI cables from to a stage box where an eight channel SDI re-clocking unit boosts the video signals before firing them down an SDI multicore to the truck and to a Canford Musa video patch bay into a Blackmagic Design ATEM video switcher, featuring a bespoke control surface made by a small Danish firm called Skaarhoj. “It’s brilliant because it’s so compact, it can sit in front of the X32 so I’ve got both consoles in front of me,” Kay enthused. “The surface also gives me tactile buttons to do the switching in front of me, fader bar for transitions and trigger macros for opening and closing credits.” While livestreaming seems to be the way of artists connecting with their audience in lockdown until the industry can “get back to normal”, Kay hoped that people will realise how “valuable” livestreaming is and begin to take it forward in the future. Interest in the truck has also now expanded beyond the realms of live music. “I’ve been hired to livestream a Remembrance Day service for a local council,” he concluded. “I’m also in discussions to livestream a Christmas lights switch-on along with other Christmas events for the same clients.” TPi Photos: Graham Kay www.xtrasonicmedia.co.uk 52