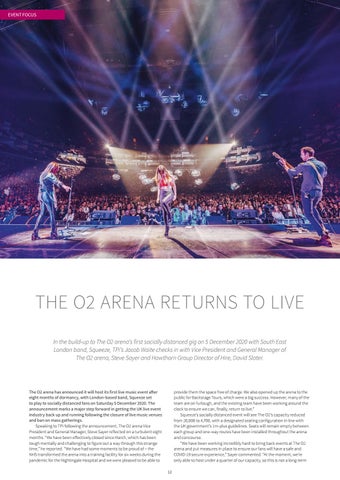 THE O2 ARENA RETURNS TO LIVE In the build-up to The O2 arena’s first socially distanced gig on 5 December 2020 with South East London band, Squeeze, TPi’s Jacob Waite checks in with Vice President and General Manager of The O2 arena, Steve Sayer and Hawthorn Group Director of Hire, David Slater.

The O2 arena has announced it will host its first live music event after eight months of dormancy, with London-based band, Squeeze set to play to socially distanced fans on Saturday 5 December 2020. The announcement marks a major step forward in getting the UK live event industry back up and running following the closure of live music venues and ban on mass gatherings. Speaking to TPi following the announcement, The O2 arena Vice President and General Manager, Steve Sayer reflected on a turbulent eight months. “We have been effectively closed since March, which has been tough mentally and challenging to figure out a way through this strange time,” he reported. “We have had some moments to be proud of – the NHS transformed the arena into a training facility for six weeks during the pandemic for the Nightingale Hospital and we were pleased to be able to

provide them the space free of charge. We also opened up the arena to the public for Backstage Tours, which were a big success. However, many of the team are on furlough, and the existing team have been working around the clock to ensure we can, finally, return to live.” Squeeze’s socially distanced event will see The O2’s capacity reduced from 20,000 to 4,700, with a designated seating configuration in line with the UK government’s 1m-plus guidelines. Seats will remain empty between each group and one-way routes have been installed throughout the arena and concourse. “We have been working incredibly hard to bring back events at The O2 arena and put measures in place to ensure our fans will have a safe and COVID-19 secure experience,” Sayer commented. “At the moment, we’re only able to host under a quarter of our capacity, so this is not a long-term 12