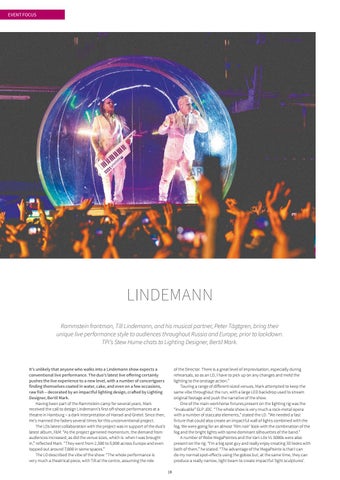 It’s unlikely that anyone who walks into a Lindemann show expects a conventional live performance. The duo’s latest live offering certainly pushes the live experience to a new level, with a number of concertgoers finding themselves coated in water, cake, and even on a few occasions, raw fish – decorated by an impactful lighting design, crafted by Lighting Designer, Bertil Mark. Having been part of the Rammstein camp for several years, Mark received the call to design Lindemann’s first off-shoot performances at a theatre in Hamburg – a dark interpretation of Hansel and Gretel. Since then, He’s manned the faders several times for this unconventional project. The LDs latest collaboration with the project was in support of the duo’s latest album, F&amp;M. “As the project garnered momentum, the demand from audiences increased, as did the venue sizes, which is when I was brought in,” reflected Mark. “They went from 2,500 to 5,000 across Europe and even topped out around 7,000 in some spaces.” The LD described the vibe of the show: “The whole performance is very much a theatrical piece, with Till at the centre, assuming the role

of the Director. There is a great level of improvisation, especially during rehearsals, so as an LD, I have to pick up on any changes and meld the lighting to the onstage action.” Touring a range of different-sized venues, Mark attempted to keep the same vibe throughout the run, with a large LED backdrop used to stream original footage and push the narrative of the show. One of the main workhorse fixtures present on the lighting rig was the “invaluable” GLP JDC. “The whole show is very much a rock-metal opera with a number of staccato elements,” stated the LD. “We needed a fast fixture that could also create an impactful wall of lights combined with the fog. We were going for an almost ‘film noir’ look with the combination of the fog and the bright lights with some dominant silhouettes of the band.” A number of Robe MegaPointes and the Vari-Lite VL 5000s were also present on the rig. “I’m a big spot guy and really enjoy creating 3D looks with both of them,” he stated. “The advantage of the MegaPointe is that I can do my normal spot-effects using the gobos but, at the same time, they can produce a really narrow, tight beam to create impactful ‘light sculptures’. 18