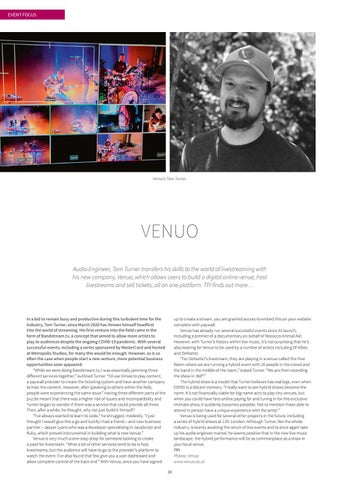 VENUO Audio Engineer, Tom Turner transfers his skills to the world of livestreaming with his new company, Venuo, which allows users to build a digital online venue, host livestreams and sell tickets, all on one platform. TPi finds out more…

In a bid to remain busy and productive during this turbulent time for the industry, Tom Turner, since March 2020 has thrown himself headfirst into the world of streaming. His first venture into the field came in the form of Bandstream.tv, a concept that aimed to allow more artists to play to audiences despite the ongoing COVID-19 pandemic. With several successful events, including a series sponsored by MasterCard and hosted at Metropolis Studios, for many this would be enough. However, as is so often the case when people start a new venture, more potential business opportunities soon appeared. “While we were doing Bandstream.tv, I was essentially jamming three different services together,” outlined Turner. “I’d use Vimeo to play content, a paywall provider to create the ticketing system and have another company to host the content. However, after speaking to others within the field, people were experiencing the same issue.” Having three different parts of the puzzle meant that there was a higher risk of issues and incompatibility and Turner began to wonder if there was a service that could provide all three. Then, after a while, he thought, why not just build it himself? “I’ve always wanted to learn to code,” he shrugged, modestly. “I just thought I would give this a go and luckily I had a friend – and now business partner – Jasper Lyons who was a developer specialising in JavaScript and Ruby, which proved instrumental in building what is now Venuo.” Venuo is very much a one-stop shop for someone looking to create a paid-for livestream. “What a lot of other services tend to do is host livestreams, but the audience will have to go to the provider’s platform to watch the event. I’ve also found that few give you a user dashboard and allow complete control of the back end.” With Venuo, once you have signed

up to create a stream, you are granted access to embed this on your website complete with paywall. Venuo has already run several successful events since its launch, including a premier of a documentary on behalf of Morocco Animal Aid. However, with Turner’s history within live music, it’s not surprising that he’s also looking for Venuo to be used by a number of artists including Of Allies and Defeatist. “For Defeatist’s livestream, they are playing in a venue called the Hive Room where we are running a hybrid event with 20 people in the crowd and the band in the middle of the room,” stated Turner. “We are then recording the show in 360°.” The hybrid show is a model that Turner believes has real legs, even when COVID is a distant memory. “I really want to see hybrid shows become the norm. It’s not financially viable for big-name acts to play tiny venues, but when you could have fans online paying for and tuning in for this exclusive intimate show, it suddenly becomes possible. Not to mention those able to attend in person have a unique experience with the artist.” Venuo is being used for several other projects in the future, including a series of hybrid shows at 229. London. Although Turner, like the whole industry, is keenly awaiting the return of live events and to once again take up his audio engineer mantel, he seems positive that in the new live music landscape, the hybrid performance will be as commonplace as a show in your local venue. TPi Photos: Venuo www.venuo.co.uk 20