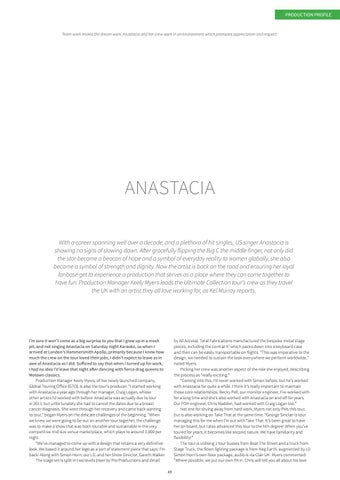 Team work makes the dream work: Anastacia and her crew work in an environment which promotes appreciation and respect.

ANASTACIA With a career spanning well over a decade, and a plethora of hit singles, US singer Anastacia is showing no signs of slowing down. After gracefully flipping the Big C the middle finger, not only did the star become a beacon of hope and a symbol of everyday reality to women globally, she also became a symbol of strength and dignity. Now the artist is back on the road and ensuring her loyal fanbase get to experience a production that serves as a place where they can come together to have fun. Production Manager Keely Myers leads the Ultimate Collection tour’s crew as they travel the UK with an artist they all love working for, as Kel Murray reports.

I’m sure it won’t come as a big surprise to you that I grew up in a mosh pit, and not singing Anastacia on Saturday night Karaoke, so when I arrived at London’s Hammersmith Apollo, primarily because I knew how much the crew on the tour loved their jobs, I didn’t expect to leave as in awe of Anastacia as I did. Sufficed to say that when I turned up for work, I had no idea I’d leave that night after dancing with fierce drag queens to Motown classics. Production Manager Keely Myers, of her newly launched company, Global Touring Office (GTO), is also the tour’s producer. “I started working with Anastacia a year ago through her manager, Craig Logan, whose other artists I’d worked with before. Anastacia was actually due to tour in 2013, but unfortunately she had to cancel the dates due to a breast cancer diagnosis. She went through her recovery and came back wanting to tour,” began Myers on the delicate challenges of the beginning. “When we knew we were going to be out on another tour together, the challenge was to make a show that was both tourable and sustainable in the very competitive mid size venue marketplace, which plays to around 3,000 per night. “We’ve managed to come up with a design that retains a very definitive look. We based it around her logo as a sort of statement piece that says: I’m back! Along with Simon Horn, our LD, and her Show Director, Gareth Walker. The stage set is split in two levels (riser by Pro Productions and detail

by All Access). Total Fabrications manufactured the bespoke metal stage pieces, including the central ‘A’ which packs down into a keyboard case and then can be easily transportable on flights. “This was imperative to the design, we needed to sustain the look everywhere we perform worldwide,” noted Myers. Picking her crew was another aspect of the role she enjoyed, describing the process as “really exciting.” “Coming into this, I’d never worked with Simon before, but he’s worked with Anastacia for quite a while. I think it’s really important to maintain those core relationships. Becky Pell, our monitor engineer, I’ve worked with for a long time and she’s also worked with Anastacia on and off for years. Our FOH engineer, Chris Madden, had worked with Craig Logan too.” Not one for shying away from hard work, Myers not only PMs this tour, but is also working on Take That at the same time. “George Sinclair is tour managing this for me when I’m out with Take That. It’s been great to have her on board, but I also advanced this tour to the Nth degree! When you’ve toured for years, it becomes like second nature. We have familiarity and flexibility!” The tour is utilising 2 tour busses from Beat The Street and a truck from Stage Truck, the flown lighting package is from Neg Earth, augmented by LD Simon Horn’s own floor package, audio is via Clair UK. Myers commented: “Where possible, we put our own PA in. Chris will tell you all about his love 49