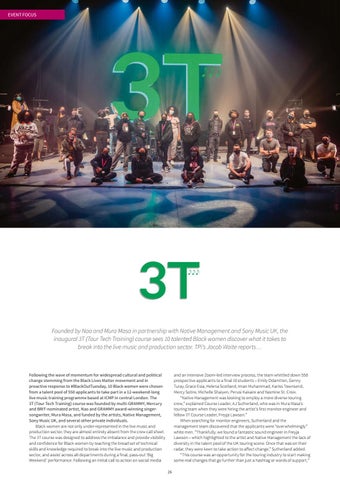 Following the wave of momentum for widespread cultural and political change stemming from the Black Lives Matter movement and in proactive response to #BlackOutTuesday, 10 Black women were chosen from a talent pool of 550 applicants to take part in a 12-weekend-long live music training programme based at ICMP in central London. The 3T (Tour Tech Training) course was founded by multi-GRAMMY, Mercury and BRIT-nominated artist, Nao and GRAMMY award-winning singersongwriter, Mura Masa, and funded by the artists, Native Management, Sony Music UK, and several other private individuals. Black women are not only under-represented in the live music and production sector, they are almost entirely absent from the crew call sheet. The 3T course was designed to address the imbalance and provide visibility and confidence for Black women by teaching the broad set of technical skills and knowledge required to break into the live music and production sector, and assist across all departments during a final, pass-out ‘Big Weekend’ performance. Following an initial call to action on social media

and an intensive Zoom-led interview process, the team whittled down 550 prospective applicants to a final 10 students – Emily Odamtten, Genny Turay, Grace Esia, Helena Scotland, Iman Muhammad, Kariss Townsend, Mercy Sotire, Michelle Shaiyen, Perusi Kakaire and Yasmine St. Croix. “Native Management was looking to employ a more diverse touring crew,” explained Course Leader, AJ Sutherland, who was in Mura Masa’s touring team when they were hiring the artist’s first monitor engineer and fellow 3T Course Leader, Freyja Lawson.” When searching for monitor engineers, Sutherland and the management team discovered that the applicants were “overwhelmingly” white men. “Thankfully, we found a fantastic sound engineer in Freyja Lawson – which highlighted to the artist and Native Management the lack of diversity in the talent pool of the UK touring scene. Once that was on their radar, they were keen to take action to affect change,” Sutherland added. “This course was an opportunity for the touring industry to start making some real changes that go further than just a hashtag or words of support,” 26