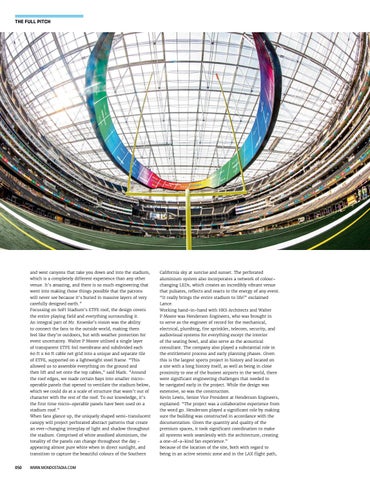 and west canyons that take you down and into the stadium,

California sky at sunrise and sunset. The perforated

which is a completely different experience than any other

venue. It’s amazing, and there is so much engineering that

went into making those things possible that the patrons

that pulsates, reflects and reacts to the energy of any event.

“It really brings the entire stadium to life!” exclaimed

the entire playing field and everything surrounding it.

P Moore was Henderson Engineers, who was brought in

An integral part of Mr. Kroenke’s vision was the ability

to serve as the engineer of record for the mechanical,

to connect the fans to the outside world, making them

feel like they’re outdoors, but with weather protection for

audiovisual systems for everything except the interior

of the seating bowl, and also serve as the acoustical

of transparent ETFE foil membrane and subdivided each

consultant. The company also played a substantial role in

the entitlement process and early planning phases. Given

of ETFE, supported on a lightweight steel frame. “This

this is the largest sports project in history and located on

allowed us to assemble everything on the ground and

a site with a long history itself, as well as being in close

then lift and set onto the top cables,” said Mark. “Around

proximity to one of the busiest airports in the world, there

the roof edges, we made certain bays into smaller micro-

were significant engineering challenges that needed to

operable panels that opened to ventilate the stadium below,

be navigated early in the project. While the design was

extensive, so was the construction.

character with the rest of the roof. To our knowledge, it’s

the first time micro-operable panels have been used on a

explained: “The project was a collaborative experience from

the word go. Henderson played a significant role by making

When fans glance up, the uniquely shaped semi-translucent

sure the building was constructed in accordance with the

documentation. Given the quantity and quality of the

an ever-changing interplay of light and shadow throughout

the stadium. Comprised of white anodised aluminium, the

all systems work seamlessly with the architecture, creating

tonality of the panels can change throughout the day -

appearing almost pure white when in direct sunlight, and

Because of the location of the site, both with regard to

transition to capture the beautiful colours of the Southern

being in an active seismic zone and in the LAX flight path,

The International Publication For Technology In Sporting Venues

The International Publication For Technology In Sporting Venues