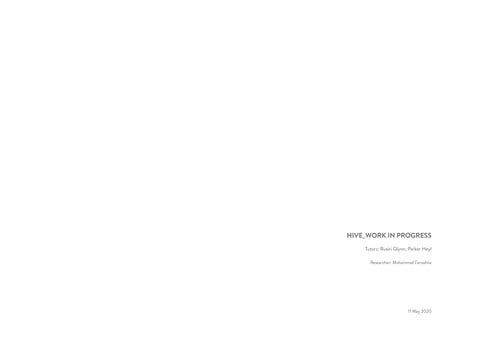 One of the main questions of the project was: How is it possible to simulate patterns and algorithms found in nature both in computer simulation and physical prototypes? Hive is a kinetic sculpture which its concept is â&amp;#x20AC;&amp;#x153;bee hive flashingâ&amp;#x20AC;? swarm intelligence.There are certain types of honeybee that create mesmerising waves when they feel threatened . When a wasp or some other large insect gets too close to the hive, the honeybees work together to disorient the enemy. This wave effect makes it difficult for an insect to single out and attack an individual honeybee.

We tried to copy this diffusion pattern through a superficial visual script written in Rhino and Grasshopper on a flat surface. This script breaks a surface into hexagons and then calculates the distance between them and one or two points and then decides what panels move based on their distances.

The computer simulation was satisfactory and it was the time to test if we could bring it to reality. So we focused on making one wing (Pedal) to test different mechanisms. The first idea was to use a servo motor behind the surface (paper) and use Arduino to control this motor. This micro servo then rotates between 0-180 and cause the panel to open.

Several tests were done including piston mechanism to see if there is better method to use for our pedals.

Left photo is when servo is in its OFF mode and the right one is the ON mode.

After several tests, The final mechanism for the first prototype was to make a servo holder that panels could connect to servos handles.

The goal of making first prototype was to see if there was an integration between computer codes and physical model. It was a 190 * 190 * 75 mm box containing 4 pedals on it. No glue was used in order to make model recyclable. The main material is 3 mm plywood connecting with M3 12mm screws and nuts.

The movements of pedals were not satisfactory and we were looking for a way to move them softer. Also, The gap between pedals and base needed to be removed.

So we used hinge technique in order to bend our stiff material (Plywood). Different patterns and density were tested in order to receive the appropriate resault.

Due to the problems we cad in the first prototype while connecting servos handles to pedals, there was a need of redesigning servo holders. Additionally, There is a difference when handle hits the pedal in the middle or top. So we did test different motor locations and connection details.

In the meantime, project was leading us to expand hexagons around none-flat NURBS surfaces. Sphere was chosen because it has the most curve surface amongst basic geometries. Shapes were generated around a hemisphere in order to prevent our second prototype from becoming both complex in modelling and expensive in cost.

However, using hexagone generating tools in software did not give us the resault we wanted because of different pedals sizes. So we chose penthagonal geometries to use for our second prototype. We chose the one with least panel on it because of both complexity in making and cost.

It is not built yet though due to school closure during Covid-19 virus.

What we are looking for in the near future? Human can be considered as a wasp and people who tries to become near to the hive will cause the model to react and generate diffusion behaviour.

The second alternative is to create a free form surface like hive. 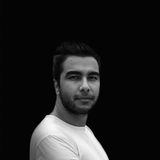