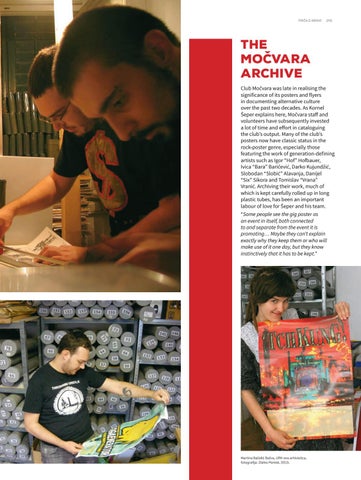 THE MOČVARA ARCHIVE Club Močvara was late in realising the significance of its posters and flyers in documenting alternative culture over the past two decades. As Kornel Šeper explains here, Močvara staff and volunteers have subsequently invested a lot of time and effort in cataloguing the club’s output. Many of the club’s posters now have classic status in the rock-poster genre, especially those featuring the work of generation-defining artists such as Igor “Hof” Hofbauer, Ivica “Bara” Baričević, Darko Kujundžić, Slobodan “Slobić” Alavanja, Danijel “Six” Sikora and Tomislav “Vrana” Vranić. Archiving their work, much of which is kept carefully rolled up in long plastic tubes, has been an important labour of love for Šeper and his team. “Some people see the gig poster as an event in itself, both connected to and separate from the event it is promoting… Maybe they can’t explain exactly why they keep them or who will make use of it one day, but they know instinctively that it has to be kept.”