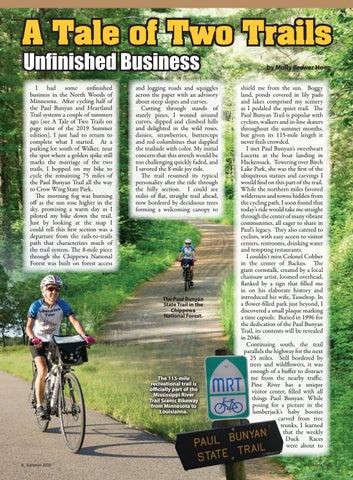 A Tale of Two Trails Unfinished Business I had some unfinished business in the North Woods of Minnesota. After cycling half of the Paul Bunyan and Heartland Trail systems a couple of summers ago (see A Tale of Two Trails on page nine of the 2019 Summer edition), I just had to return to complete what I started. At a parking lot south of Walker, near the spot where a golden spike still marks the marriage of the two trails, I hopped on my bike to cycle the remaining 75 miles of the Paul Bunyan Trail all the way to Crow Wing State Park. The morning fog was burning off as the sun rose higher in the sky, promising a warm day as I piloted my bike down the trail. Just by looking at the map I could tell this first section was a departure from the rails-to-trails path that characterizes much of the trail system. The 8-mile piece through the Chippewa National Forest was built on forest access

and logging roads and squiggles across the paper with an advisory about steep slopes and curves. Cutting through stands of stately pines, I wound around curves, dipped and climbed hills and delighted in the wild roses, daisies, strawberries, buttercups and red columbines that dappled the trailside with color. My initial concern that this stretch would be too challenging quickly faded, and I savored the 8-mile joy ride. The trail resumed its typical personality after the ride through the hilly section. I could see miles of flat, straight trail ahead, now bordered by deciduous trees forming a welcoming canopy to

The Paul Bunyan State Trail in the Chippewa National Forest.

The 115-mile recreational trail is officially part of the Mississippi River Trail Scenic Bikeway from Minnesota to Louisianna.

by Molly Brewer Hoeg shield me from the sun. Boggy land, ponds covered in lily pads and lakes comprised my scenery as I pedaled the quiet trail. The Paul Bunyan Trail is popular with cyclists, walkers and in-line skaters throughout the summer months, but given its 115-mile length it never feels crowded. I met Paul Bunyan’s sweetheart Lucette at the boat landing in Hackensack. Towering over Birch Lake Park, she was the first of the ubiquitous statues and carvings I would find on this part of the trail. While the northern miles favored wilderness and towns hidden from the cycling path, I soon found that today’s ride would take me straight through the center of many vibrant communities, all eager to share in Paul’s legacy. They also catered to cyclists, with easy access to visitor centers, restrooms, drinking water and tempting restaurants. I couldn’t miss Colonel Cobber in the center of Backus. The giant cornstalk, created by a local chainsaw artist, loomed overhead, flanked by a sign that filled me in on his elaborate history and introduced his wife, Tasseltop. In a flower-filled park just beyond, I discovered a small plaque marking a time capsule. Buried in 1996 for the dedication of the Paul Bunyan Trail, its contents will be revealed in 2046. Continuing south, the trail parallels the highway for the next 25 miles. Still bordered by trees and wildflowers, it was enough of a buffer to distract me from the nearby traffic. Pine River has a unique visitor center, filled with all things Paul Bunyan. While posing for a picture in the lumberjack’s baby booties carved from tree trunks, I learned that the weekly Duck Races were about to Minnesota Trails 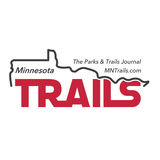