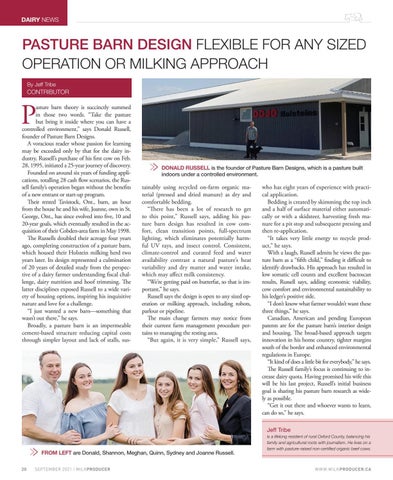 asture barn theory is succinctly summed in those two words. “Take the pasture but bring it inside where you can have a controlled environment,” says Donald Russell, founder of Pasture Barn Designs. A voracious reader whose passion for learning may be exceeded only by that for the dairy industry, Russell’s purchase of his first cow on Feb. 28, 1995, initiated a 25-year journey of discovery. Founded on around six years of funding applications, totalling 28 cash flow scenarios, the Russell family’s operation began without the benefits of a new entrant or start-up program. Their rented Tavistock, Ont., barn, an hour from the house he and his wife, Joanne, own in St. George, Ont., has since evolved into five, 10 and 20-year goals, which eventually resulted in the acquisition of their Cobden-area farm in May 1998. The Russells doubled their acreage four years ago, completing construction of a pasture barn, which housed their Holstein milking herd two years later. Its design represented a culmination of 20 years of detailed study from the perspective of a dairy farmer understanding fiscal challenge, dairy nutrition and hoof trimming. The latter disciplines exposed Russell to a wide variety of housing options, inspiring his inquisitive nature and love for a challenge. “I just wanted a new barn—something that wasn’t out there,” he says. Broadly, a pasture barn is an impermeable cement-based structure reducing capital costs through simpler layout and lack of stalls, sus-

DONALD RUSSELL is the founder of Pasture Barn Designs, which is a pasture built indoors under a controlled environment.

tainably using recycled on-farm organic material (pressed and dried manure) as dry and comfortable bedding. “There has been a lot of research to get to this point,” Russell says, adding his pasture barn design has resulted in cow comfort, clean transition points, full-spectrum lighting, which eliminates potentially harmful UV rays, and insect control. Consistent, climate-control and curated feed and water availability contrast a natural pasture’s heat variability and dry matter and water intake, which may affect milk consistency. “We’re getting paid on butterfat, so that is important,” he says. Russell says the design is open to any sized operation or milking approach, including robots, parlour or pipeline. The main change farmers may notice from their current farm management procedure pertains to managing the resting area. “But again, it is very simple,” Russell says,

who has eight years of experience with practical application. Bedding is created by skimming the top inch and a half of surface material either automatically or with a skidsteer, harvesting fresh manure for a pit stop and subsequent pressing and then re-application. “It takes very little energy to recycle product,” he says. With a laugh, Russell admits he views the pasture barn as a “fifth child,” finding it difficult to identify drawbacks. His approach has resulted in low somatic cell counts and excellent bactoscan results, Russell says, adding economic viability, cow comfort and environmental sustainability to his ledger’s positive side. “I don’t know what farmer wouldn’t want these three things,” he says. Canadian, American and pending European patents are for the pasture barn’s interior design and housing. The broad-based approach targets innovation in his home country, tighter margins south of the border and enhanced environmental regulations in Europe. “It kind of does a little bit for everybody,” he says. The Russell family’s focus is continuing to increase dairy quota. Having promised his wife this will be his last project, Russell’s initial business goal is sharing his pasture barn research as widely as possible. “Get it out there and whoever wants to learn, can do so,” he says. Jeff Tribe

is a lifelong resident of rural Oxford County, balancing his family and agricultural roots with journalism. He lives on a farm with pasture-raised non-certified organic beef cows.