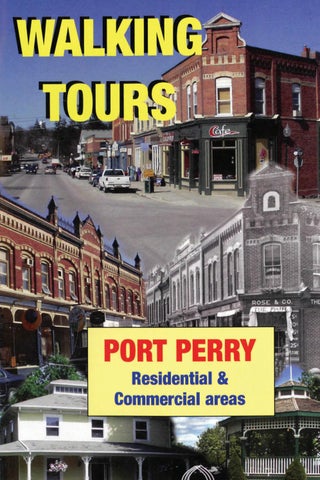 This sketch of the lower or eastern part of Queen Street appeared in the 1854 issue of the AngloAmerican Magazine. It shows Scugog Island and Lake Scugog in the background. On the right closest to the water is the Mason and Phillips Hotel, formerly Peter Perry’s store, now Remax Realty. On the extreme left is Joseph Bigelow’s store and Post Office where Panorama is located today.

7. #177-191 Panorama and adjacent shops. Shortly after Joseph Bigelow arrived in 1851, he opened a wooden, frame store on this site, which also contained the first Post Office, and later expanded it into a huge 3 story brick department store in which he sold everything needed by the citizens of the growing village, including a bank. He called his emporium the “Royal Arcade”. In 1881 he sold out to a Toronto businessman, Jonathan Blong. In 1884, it was destroyed by fire and the present building was built on the site by Blong. This is the only Queen street building to retain a roof parapet in its original 1884 form. On many of the other buildings the decorative surmounting brickwork have recently ben restored. Notice, on the second floor and the parapet, the use of detailed red brickwork using elaborate, varying patterns accentuated with contrasting yellow brick.

Directly to the west of the former library is Reflection Park.

13. #15398 Simcoe Street. A faithfully restored example of an 1870’s middle class home. Its simple story and a half style with an elegant gothic window upstairs is typical of many to be found here in Port Perry.

hall. The befry was reconstructed at this time following the original design, but has since been removed for repairs. Inside the curved staircase railings, the balcony railing and supports are perfectly preserved along with the

18. #234 Mary St. The Jackson house. A stately home built around the turn of the century using all the characteristics of the late Victorian era: red brick construction, generous eaves, sturdy brackets, and extensive use of leaded and stained glass. It is one of the few . homes which retains a complete and original stable on the property.

20. The Old Flame Brewery. This was the site of the Ontario Carriage Works, owned by James Emaney. Horse drawn vehicles were built here from the 1870’s until the depression. This factory produced more vehicles than any other company in this part of Ontario until Sam McLaughlin ventured into those noisy, smelly, unreliable, internal combustion engines. 21. #100 Perry Street. This was the first home of Joseph Bigelow who arrived in Port Perry in 1851 and had this home built on Queen Street next door to, and directly to the west of his “Royal Arcade”. He had the home moved to this location in the late 1860s, thus it survived the fire. The home was renovated, enlarged and restored in 2016 by a Bigelow descendant who now lives in the home.

22. #53 Perry Street. The Burnham House. Although its eastern section has been changed and added on to, the front half of this home is a well-maintained example of Italianate styling. The front woodwork details are extremely well preserved, notice the entrance porch and the iron crestwork. It was built in 1878 for J.W. Burnham, a longtime postmaster and Divisional Court Clerk in Port Perry and son of Judge Burnham of Whitby. 23. #188 Mary St. The Star Building. The first newspaper to be produced in this area was the “Ontario Observer”, a weekly paper printed in Prince Albert in 1857 by James Holden. In 1866 the “Port Perry Standard and North Ontario Advertiser” began its life in Port Perry. In 1873, the “Observer” moved to Port Perry beginning an intense rivalry. The “Standard” won out and changed its name to the “Port Perry Star”. Samuel Farmer purchased it in 1907. In 1963, Per Hvidsten purchased the paper and after retiring his son Peter operated the business before selling it in 2001. This building was opened in Jan. 1991.

8. #399 Queen St. - Daycare School was the site of the Mechanics Institute. These Institutes were established in communities across Ontario as a precursor of the library and as a centre for lectures of a scientific or cultural nature. Port Perry’s Mechanics Institute was built in the late 1850’s. The building was purchased by the Baptists in 1863 who added a steeple and a vestry. Later the steeple was removed again and the entire building moved to the Fairgrounds. The original church building was recently removed.

10. #178 The Bigelow House. Joseph Bigelow (see Queen Street) had this house built in 1877 by H.R. Barber of Oshawa when his first home was no longer adequate (see 100 Perry Street). It is probably the finest and most complete example of pure Italianate in this part of Ontario (see note on Italianate). In 1854, Joseph married Elizabeth Paxton who was influential in certain features within the house; she had the summer kitchen located in the basement and the winter kitchen located at back of the house and the maids’ quarters located on the second floor. She also had many of the fireplaces sealed up because she complained about the soot and smoke they created. It was only in the last two decades that the fire places were revealed. Mr Bigelow died in 1917 after a long and prosperous business career, for not only was he involved in merchandising, he was a prime mover in bringing the railway to Port Perry and became the village’s first Reeve in 1872.

14. # 258 The William Tate House. This beautiful rambling home was built by William Tate, partner in the Paxton and Tate foundry here in Port Perry, which made agricultural implements, pumps and turbines. Charles Jones, a highly successful Queen Street general merchant, bought it in 1899. The store that he owned with his brother was located on the site between what is now Luke’s Country Store and Panorama. In the last decade the house has been extensively restored and an addition put on the western side, but the main 1870’s house is unchanged. This home was in the Aldred family for many years. The Aldreds were a pioneer family on Scugog Island.

2. The North side of Queen Street looking east toward the Lake.

Taken before the 1884 fire it shows, from the left, Currie’s grain store (todayGuardian Drugs), Parrish’s Hardware (today - Luke’s Country Store), Jones Brothers (Emmerson’s), and then the Bigelow Arcade (Panorama), but just between Jones’ and Bigelow can be seen the corner of the roof of Mr. Bigelow’s first house (100 Perry Street). In the distance can be seen Currie’s Mill. 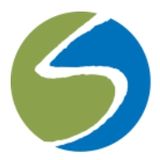