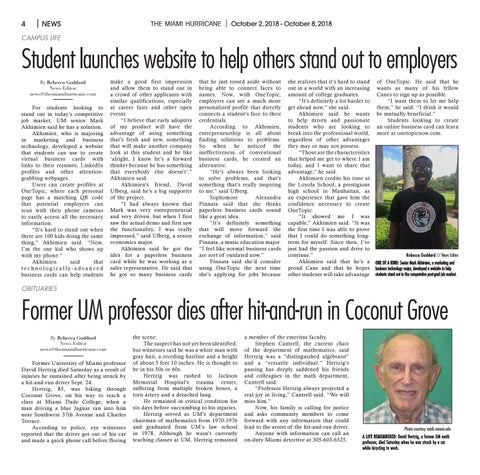 Student launches website to help others stand out to employers By Rebecca Goddard News Editor news@themiamihurricane.com

For students looking to stand out in today’s competitive job market, UM senior Mark Akhimien said he has a solution. Akhimien, who is majoring in marketing and business technology, developed a website that students can use to create virtual business cards with links to their resumes, LinkedIn profiles and other attentiongrabbing webpages. Users can create profiles at OneTopic, where each personal page has a matching QR code that potential employers can scan with their phone cameras to easily access all the necessary information. “It’s hard to stand out when there are 100 kids doing the same thing,” Akhimien said. “Now, I’m the one kid who shows up with my phone.” Akhimien said that technologically-advanced business cards can help students

make a good first impression and allow them to stand out in a crowd of other applicants with similar qualifications, especially at career fairs and other open events. “I believe that early adopters of my product will have the advantage of using something that’s fresh and new, something that will make another company look at this student and be like ‘alright, I know he’s a forward thinker because he has something that everybody else doesn’t’,” Akhimien said. Akhimien’s friend, David Ufberg, said he’s a big supporter of the project. “I had always known that Mark was very entrepreneurial and very driven, but when I first saw the actual demo and first saw the functionality, I was really impressed,” said Ufberg, a senior economics major. Akhimien said he got the idea for a paperless business card while he was working as a sales representative. He said that he got so many business cards

that he just tossed aside without being able to connect faces to names. Now, with OneTopic, employers can see a much more personalized profile that directly connects a student’s face to their credentials. According to Akhimien, entrepreneurship is all about finding solutions to problems. So when he noticed the ineffectiveness of conventional business cards, he created an alternative. “He’s always been looking to solve problems, and that’s something that’s really inspiring to me,” said Ufberg. Sophomore Alexandra Pinnata said that she thinks paperless business cards sound like a great idea. “It’s definitely something that will move forward the exchange of information,” said Pinnata, a music education major. “I feel like normal business cards are sort of outdated now.” Pinnata said she’d consider using OneTopic the next time she’s applying for jobs because

she realizes that it’s hard to stand out in a world with an increasing amount of college graduates. “It’s definitely a lot harder to get ahead now,” she said. Akhimien said he wants to help driven and passionate students who are looking to break into the professional world, regardless of other advantages they may or may not possess. “Those are the characteristics that helped me get to where I am today, and I want to share that advantage,” he said. Akhimien credits his time at the Loyola School, a prestigious high school in Manhattan, as an experience that gave him the confidence necessary to create OneTopic. “It showed me I was capable,” Akhimien said. “It was the first time I was able to prove that I could do something longterm for myself. Since then, I’ve just had the passion and drive to continue.” Akhimien said that he’s a proud Cane and that he hopes other students will take advantage

of OneTopic. He said that he wants as many of his fellow Canes to sign up as possible. “I want them to let me help them,” he said. “I think it would be mutually beneficial.” Students looking to create an online business card can learn more at onetopicnow.com.

Rebecca Goddard // News Editor ONE OF A KIND: Senior Mark Akhimien, a marketing and business technology major, developed a website to help students stand out in the competetive post-grad job market.

Former University of Miami professor David Hertzig died Saturday as a result of injuries he sustained after being struck by a hit-and-run driver Sept. 24. Hertzig, 85, was biking through Coconut Grove, on his way to teach a class at Miami Dade College, when a man driving a blue Jaguar ran into him near Southwest 37th Avenue and Charles Terrace. According to police, eye witnesses reported that the driver got out of his car and made a quick phone call before fleeing

the scene. The suspect has not yet been identified, but witnesses said he was a white man with gray hair, a receding hairline and a height of about 5 feet 10 inches. He is thought to be in his 50s or 60s. Hertzig was rushed to Jackson Memorial Hospital’s trauma center, suffering from multiple broken bones, a torn artery and a detached lung. He remained in critical condition for six days before succumbing to his injuries. Hertzig served as UM’s department chairman of mathematics from 1970-1976 and graduated from UM’s law school in 1978. Although he wasn’t currently teaching classes at UM, Hertzig remained

a member of the emeritus faculty. Stephen Cantrell, the current chair of the department of mathematics, said Hertzig was a “distinguished algebraist” and a “versatile individual.” Hertzig’s passing has deeply saddened his friends and colleagues in the math department, Cantrell said. “Professor Hertzig always projected a real joy in living,” Cantrell said. “We will miss him.” Now, his family is calling for justice and asks community members to come forward with any information that could lead to the arrest of the hit-and-run driver. Anyone with information can call an on-duty Miami detective at 305-603-6525.

Photo courtesy math.miami.edu A LIFE REMEMBERED: David Hertzig, a former UM math professor, died Saturday when he was struck by a car while bicycling to work. 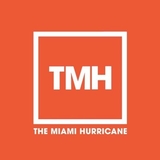