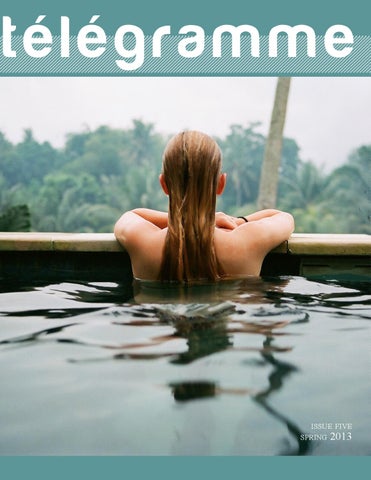 Editor's Note Welcome to issue Five of Télégramme Magazine. It’s been six months since the last and in that time a lot has changed - I’m now a Mrs, my nephew entered the world just before that and heartbreakingly a beautiful friend has been lost to the ether. We’ll miss you forever, Lisa. Yours is a light that will never go out. This issue has inadvertently become the female issue as all our featured photographers are fantastic gals but hey, there’s nothing wrong with that, right? We think we’ve got something for everyone this time so dig in, flip through and appreciate the joy. Many thanks to Ben Cole for the beautiful capture of his wife, taken on their honeymoon, which graces our cover this issue. We’ll see you again when autumn rolls around, Love from

Special Thanks In memory of the beautiful girl with the broken wings.

Telegramme speaks to: agustina Agustina is a 24 year old photographer from Buenos Aires, Argentina. How long have you been taking photos? What would your day job be in an ideal world? None at all! Just travel around and Between three and four years get to know new cultures! (; Do you have any heroes / idols / Do you have any shows / exhibitions inspiration? Too many! coming up? I’m currently working on two Frida Kahlo, Rene Magritte, Hieronymus exhibitions as a curator. Bosch, Hockney, Vivian Maier, Nan Goldin, William Eggleston, Hiroshi Sugimoto, Ana The first one is about photographs taken Mendieta, Marina Abramovic, Ai Weiwei, with an old photographic process (wet plate Gabriel Orozco, Leandro Erlich, Wolfgang collodion) and the other one ..... well... I’m Tillmans, Sergei Eisenstein, Dziga Vertov... still thinking about it! What’s your favourite format to shoot The only thing I know is that it’s going to be held in Italy. in? Medium format with film. If you couldn’t take photos what would you do instead? Painting! (But I really suck at it...) [web] www.agustinalapenda.com.ar [flickr] flickr.com/aguslap all photos

in the shadows Telegramme: issue 5

Leni Kauffman is a 29 year old illustrator based in London, UK. How long have you been an illustrator? All my life, I’ve been drawing since I could hold a pencil! Professionally I’ve been illustrating for the past 5 years or so. What’s your favourite thing to draw? Food! And beautiful places in foreign climates when I’m lucky enough to get the chance to travel.

How would you describe your style? Nostalgic, colourful, detailed. Do you have any heroes / idols / inspiration? Tons! Some illustrators I admire: David Downton, Kate Beaton, Sachin Teng, Caitlin McGauley, Rene Gruau. I get visual inspiration from exquisitely made food, shrubbery, countless movies, and Doctor Who.

If you weren’t an illustrator what would you be? I’m not sure, but for a while there I wanted to be an Archeologist. (Specifically, I wanted to be Indiana Jones.) Do you have any shows / exhibitions coming up? No, but I will be updating my online shop soon! [web] www.lenikauffman.com [twitter] @lenikauffman all photos

Telegramme speaks to: sarah anne Sarah Anne Wharton Kuhn is a photographer living in New York, USA. How long have you been a photographer? Most of my life! - taking photos since I was a bug-eyed, bespectacled, chubby-fingered tenyear-old in an oversized 101 Dalmatians tee; studying photography since I got hooked on the darkroom chemical smell at 16; and now trying to make a go at it professionally. Do you ever find yourself without inspiration? Sometimes yes, but not often. Usually, it’s the other way around - where I have so many ideas and things I want to shoot that it almost seems oppressive (HOW WILL I DO THEM ALL?!?), and I get paralysed for a minute. But, if I do find myself without, taking a walk almost always reinvigorates and inspires - especially in new places, or long-familiar ones. Do you shoot with 35mm or on digital? Both, and ideally, more with film. I grew up on film and all its sensory impact - the touch of the paper, the scent of the chemicals, the glint and grain and depth of the print - and made the switch to digital out of necessity and much later than others, only within the last few years. I will shoot with any camera you put in my hand, though.

Do you have a favourite time of day or place to shoot? I love shooting in the morning when it’s quiet and the day is just starting to breathe and bustle and come alive. And I love shooting the desert - with its openness and light - but I also love shooting where the people are. Everything is so terribly interesting to look at and know! and for that reason, I take pictures. If you weren’t taking photos, what would you be doing instead? I would probably be doing one of two things - birthing babies as a midwife or doctor in another country or icing cupcakes in a bakery. What are your plans for the next few years? I think about this much too often, which is odd, because I don’t have a plan really! - But my plan for the next few years starts with my plan for the next few minutes - drinking a cup of coffee, thinking about people and pictures, and how I can collect and take more of them. I want to make it my goal to make photography - and the documentation of all those little moments we usually forget - my livelihood. That is the thing that fulfills me, that is what I work for, and I am open to however that happens, the sooner the better! [web] www.sawkphotography.com [twitter] @sawked all photos

Telegramme speaks to: emily Emily is an 18 year old student currently living Do you have any shows / exhibitions coming up? I’ve never had a show or exhibition but in Birmingham in the UK. that would be something I’d like to think about How long have you been taking photos? I doing in the future, maybe when I’m more started taking photos when I was about 7. My comfortable with my own style. first camera was a small compact digital one but it was only when I discovered Flickr in 2009 What draws you to photography? Originally I that I began using 35mm which is the medium was interested in more conceptual photography and creating my own pretty pictures which I still I really enjoy using now. enjoy doing, but I’ve become more interested Do you have any heroes / idols / inspiration? I in candid photography and recording things as really enjoy taking photos in spring and autumn they are lately. for some reason. I think it’s because in those seasons it feels like things are changing and What are your ambitions? I’d like to be able new things are coming, which spurs me to go to continue using 35mm as a hobby and maybe out and take photos. It sounds a bit trivial but one day I’d like to create a zine or magazine simplicity - light and the weather inspire me a covering different mediums such as music, art, lot and I think in a dreary country like England photography, with others like poetry, writing, it’s important (for everyone, but especially for journalism. Mixing it up. I don’t know what I’d people who like to take pictures) to make the like to do career-wise yet, although journalism most of whatever light we get. Photographer- and writing on women’s issues is something wise I could mention thousands that have that has interested me lately. Perhaps I could inspired me: there’s endless amounts of talent integrate photography with that. I just don’t on the internet. Everyone is a photographer in want to rush into a career and then regret it when I’m 40. 2013. If you couldn’t take photos what would you do instead? I actually study history at the University of Birmingham at the moment which is my priority right now, but I will hopefully always continue photography as a hobby. If I couldn’t take photos at all my creative outlet would probably be more drawing and/or making collages or writing - which is actually something I would like to do more of in the future as well as photography.

Telegramme speaks to: cassoday Cassoday is a 19 year old living in Wichita, inspiration goes, it can come from anywhere; Kansas, USA. other photographers, songs, movies, books, the weather, a quote, my friends and family, etc. How long have you been taking photos? I’ve been taking photos for about three years now- If you couldn’t take photos what would I started when I was about sixteen with my you do instead? It’s hard to imagine my life mom’s old Rebel XS. without photography! But I think if I wasn’t taking photos I’d aspire to be a writer. Do you have any heroes / idols / inspiration? I admire so many photographers: Tamara Do you have any shows / exhibitions coming Lichtenstein, Aaron Feaver, and Kitty up? None that I know of in the near future! Gallannaugh, to name a few. As far as 106

Why do you take photos? This is a hard question, because there are so many reasons. I just love to create! I love to create beautiful things. Itâ&#x20AC;&#x2122;s my favorite thing in the world to do, it gives me a feeling of purpose. What are your plans for the future? Continue in school and continue to take photos every day, work as hard as I can to improve my skills, and see where it takes me.

“double exposure at the pond” © kari

thank you for reading. 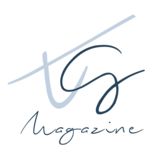