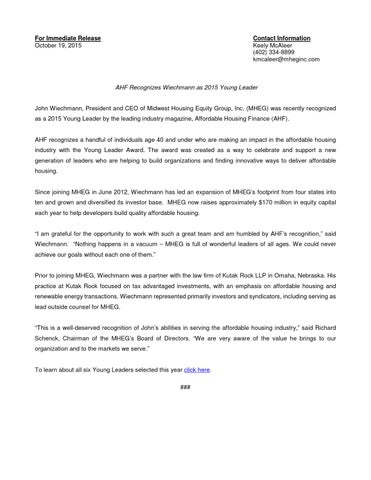 AHF recognizes a handful of individuals age 40 and under who are making an impact in the affordable housing industry with the Young Leader Award. The award was created as a way to celebrate and support a new generation of leaders who are helping to build organizations and finding innovative ways to deliver affordable housing.

Since joining MHEG in June 2012, Wiechmann has led an expansion of MHEG’s footprint from four states into ten and grown and diversified its investor base. MHEG now raises approximately $170 million in equity capital each year to help developers build quality affordable housing.

“I am grateful for the opportunity to work with such a great team and am humbled by AHF’s recognition,” said Wiechmann. “Nothing happens in a vacuum – MHEG is full of wonderful leaders of all ages. We could never achieve our goals without each one of them.”

Prior to joining MHEG, Wiechmann was a partner with the law firm of Kutak Rock LLP in Omaha, Nebraska. His practice at Kutak Rock focused on tax advantaged investments, with an emphasis on affordable housing and renewable energy transactions. Wiechmann represented primarily investors and syndicators, including serving as lead outside counsel for MHEG.

“This is a well-deserved recognition of John’s abilities in serving the affordable housing industry,” said Richard Schenck, Chairman of the MHEG’s Board of Directors. “We are very aware of the value he brings to our organization and to the markets we serve.”

To learn about all six Young Leaders selected this year click here. ###