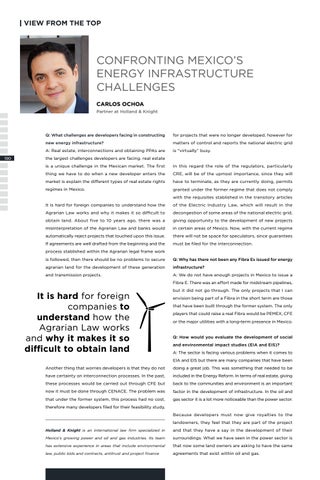 VIEW FROM THE TOP

Q: What challenges are developers facing in constructing

for projects that were no longer developed, however for

matters of control and reports the national electric grid

A: Real estate, interconnections and obtaining PPAs are

the largest challenges developers are facing. real estate is a unique challenge in the Mexican market. The first

In this regard the role of the regulators, particularly

thing we have to do when a new developer enters the

CRE, will be of the upmost importance, since they will

market is explain the different types of real estate rights

have to terminate, as they are currently doing, permits

It is hard for foreign companies to understand how the

of the Electric Industry Law, which will result in the

Agrarian Law works and why it makes it so difficult to

decongestion of some areas of the national electric grid,

obtain land. About five to 10 years ago, there was a

giving opportunity to the development of new projects

misinterpretation of the Agrarian Law and banks would

in certain areas of Mexico. Now, with the current regime

automatically reject projects that touched upon this issue.

there will not be space for speculators, since guarantees

If agreements are well drafted from the beginning and the

must be filed for the interconnection.

process stablished within the Agrarian legal frame work is followed, then there should be no problems to secure

Q: Why has there not been any Fibra Es issued for energy

agrarian land for the development of these generation

A: We do not have enough projects in Mexico to issue a Fibra E. There was an effort made for midstream pipelines,

but it did not go through. The only projects that I can envision being part of a Fibra in the short term are those that have been built through the former system. The only players that could raise a real Fibra would be PEMEX, CFE or the major utilities with a long-term presence in Mexico. Q: How would you evaluate the development of social and environmental impact studies (EIA and EIS)? A: The sector is facing various problems when it comes to EIA and EIS but there are many companies that have been

Another thing that worries developers is that they do not

doing a great job. This was something that needed to be

have certainty on interconnection processes. In the past,

included in the Energy Reform. In terms of real estate, giving

these processes would be carried out through CFE but

back to the communities and environment is an important

now it must be done through CENACE. The problem was

factor in the development of infrastructure. In the oil and

that under the former system, this process had no cost,

gas sector it is a lot more noticeable than the power sector.

therefore many developers filed for their feasibility study, Because developers must now give royalties to the landowners, they feel that they are part of the project Holland & Knightis an international law firm specialized in

and that they have a say in the development of their

Mexico’s growing power and oil and gas industries. Its team

surroundings. What we have seen in the power sector is

has extensive experience in areas that include environmental

that now some land owners are asking to have the same

agreements that exist within oil and gas. 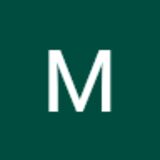