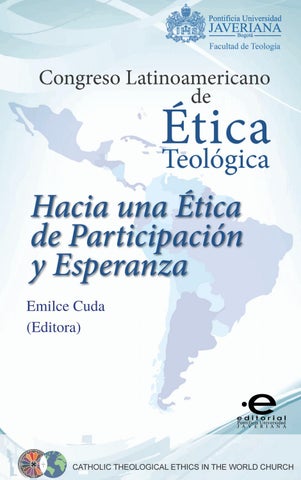 Contenido How did we get to Bogotá?

How did we get to Bogotá? I

n 2002 while teaching at the Gregorian University in Rome, I invited my colleague from Boston College, Steve Pope, who was in town, to dinner with three other moral theologians from the Roman universities. It was a wonderful evening, and there, I began thinking, what if we moralists held an international meeting where we could have simple, face-to-face conversations. It had never been done before. Later, I was approached by the staff of a European Catholic foundation who asked if I would be willing to host a seminar of eight international scholars in moral theology. The seminar would meet annually for 4 years, and at the end of it, we would publish a text on themes from our field: the conscience, moral decision-making, the magisterium, etc. I responded, “Could you fund, instead, an international planning committee for 4 years to plan an international conference for two hundred moral theologians?” They agreed to host the first planning meeting. They would decide from there, whether they would fund more meetings, which eventually they did. Our first challenge was to set up an international planning committee. I contacted Paul Schotsmans from the Catholic University of Leuven, Paul Schotsman and also Margaret Farley from Yale University. We also needed at least another European, and one from India, East Asia, Africa and Latin America each. After a period of four months, we formed an international planning committee: Soosai Arokiasamy (India), Benezet Bujo (Congo), Margaret Farley (US), Linda Hogan (Ireland), Jose Roque Junges (Brazil), Jose Rojas (Philippines) and Paul Schotsmans (Belgium). Paul suggested that we have our first meeting in Leuven in November 2003. Our first evening was, naturally, a meal. We learned that the act of meeting one another was itself the agenda. We also realized that to be truly international, we would have to underwrite the transportation and housing for scholars from the developing world. This would mean substantive fund-raising. For a variety of reasons, we decided to meet in Italy and chose Padova: a medieval city, with one of the world’s oldest and most respected universities as well as a center of religious pilgrimage. This city where Giotto painted, Anthony lived and preached, Galileo lectured, Harvey discovered the circulatory system, and Elena Piscopia became the first woman to earn a doctorate (1678), would be perfect for contemporary moral theologians. We gave ourselves a name “Catholic Theological Ethics in the World Church” (CTEWC), created a mission statement, began planning for our conference, and started fund-raising.

how did we get to bogotá?

What Did We Achieve? First, it is one thing to read or cite colleagues; it is another to meet and discuss with them. Here we had the opportunity to ask our colleagues questions, to see what they were like as persons, and to tell them how our own work was proceeding. It was not simply a sharing of ideas; it was a meeting of persons. Second, we discovered a lot in common, above all, that “we shared the same vocation,” a comment frequently uttered. This extraordinary lesson prompted a strong intellectual and affective solidarity among us all. It also gave us a renewed sense of the good we bring to the Church. This solidarity played out across generations and gender. Not only did we have senior moralists, we also had juniors, fifty young scholars. Not only did we have clergy, but we had laity. Not only were there men, there were women. Third, with so much good will and respect toward one another, we were able to challenge one another. When three senior ethicists concluded their remarks on the African continental panel, three African women ethicists took them to task for not mentioning anything about living in profoundly patriarchal settings. When a French scholar spoke of the primacy of the conscience, an Italian responded speaking about the competency of the magisterium. The most significant exchange came when, after the North American panel spoke at length about the military aggressiveness of the U.S., several others asked, were scholars from the States doing enough in light of the impact such policies were having on their own countries. Fourth, appreciating the need to meet and dialogue spawned the formation of other groups. The Africans formed their first pan-African Association of Theological Ethicists and the Asians explored similar possibilities. Women theologians established a list serve, after sixty of them shared a dinner together. That same evening, fifty doctoral students held their own dinner while fifty-five Jesuits ethicists gathered as well. Meeting was defining us.

Fifth, above all the need to continue the dialogue emerged. At the closing session we pledged to meet again in four years; to establish a committee to work toward implementing organizational structures for our solidarity; and, to develop a monthly newsletter (appearing monthly on our website, www.catholicethics.com) to keep one another in touch.

From Padova to Bogotá We met a second time in Trento, Italy in June 2010. Six hundred from 72 countries.2 With this meeting, CTEWC came of age and the now completely different planning committee decided to fortify the network by hosting regional (continental) conferences. In 2012, the Nigerian Agbonghianmeghe Orobator, SJ, chaired the first Pan African Congress in Nairobi for 45 African Catholic ethicists. In 2013, the North American Regional Committee decided to engage their colleagues through a working group (2014-2016) at the annual meetings of the Catholic Theological Society of America. In 2014, Roman Globokar (Slovenia) and Konrad Glombik (Poland) held the European Congress in Krakow for 45 moralists.3 In 2015, the late Yiu Sing Lúcás Chan, SJ, (Hong Kong) and Shaji George Kochuthara, CMI (India) organized the first Pan-Asian conference in Bangalore for 100 Catholic Ethicists.4 For Bogotá, the indomitable Maria Teresa (MT) Davila from Andover Newton Theological School and Director of the Latin American Region, met with the Javeriana’s María Isabel Gil Espinosa and Alberto Munera, SJ. Together they invited roughly 100 hundred Catholic ethicists from more than twenty countries. While the shared identity of Latin American theologians provided the background, the organizers brought to the foreground the differences from each part of the continent by inviting nine distinctive national voices to speak. Despite some similarities, the challenges and hopes in contemporary Brazil are considerably different from those in Chile, Colombia, or Cuba. Nowhere was the difference heard more than when Luis Jesús Paz Acosta from El Salvador spoke about the urgent struggles with gangs, while Javier Menocal acknowledged the absence of such phenomenon in Nicaragua. Differences across Latin America were remarkable. The conference sponsored 12 plenary papers and more than 60 other concurrent presentations on such themes as gender, sexuality, human trafficking, de-colonization, immigration, Laudato Si’ 2 James F. Keenan, ed., Catholic Theological Ethics, Past, Present, and Future: The Trento Conference (Maryknoll: Orbis Press, 2011); Etica Teologica Catolica: Passado, Presente e Futuro: A Conferencia de Trento, (Aperecida: Editoria Santuario, 2015). 3 Konrad Glombik, ed., Theological Ethics in a Changing Church Colloquia Theologica (Opole: Opole University, 2015). 4 Yiu Sing Lúcás Chan, James F. Keenan, and Shaji George Kochuthara, ed., Doing Catholic Theological Ethics in a Cross Cultural and Interreligious Asian Context (Bangalore: Dharmaram Press, 2016).

how did we get to bogotá?

and sustainability, Amoris Laetitia and the family, poverty, unemployment, drug use, aesthetics, and the primacy of conscience. Major senior moralists like Munera were there including: Marcio Fabri dos Anjos, CSsR (Brazil), Theresa Lowe Ching, RSM, (Jamaica), Luis Ugalde, SJ and Pedro Trigo, SJ (Venezuela). But newer scholars were even more evident. Besides Luz and Gil Espinosa, Alexandre Martins (Brazil), Jutta Battenberg (Mexico), Hilda Ortiz Mena Fernández (Mexico), and Claudia Montes de Oca Ayala (Bolivia) each prophetically urged us toward greater dialogue, fearless solidarity, and critical attention to the most marginalized. Bishop Jorge Lonzano who heads the Social Pastoral Commission of the Argentinian Bishop’s Conference presided at Saturday evening’s Eucharist and earlier presented a very significant paper on communication and social change. Like Padova, ten years earlier, we found at the Javeriana, how good it was for us to come together. And now, as we present these papers to you, we prepare for our third international conference of CTEWC, in Sarajevo, July 2018. 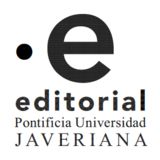