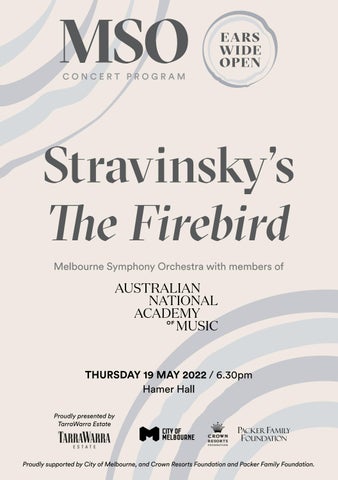 Stravinsky’s The Firebird Melbourne Symphony Orchestra with members of

GRAHAM ABBOTT A graduate of the Sydney Conservatorium, Graham Abbott has been Conductor-in-Residence at the Elder Conservatorium of Music, University of Adelaide, Musical Director of Adelaide Chorus and Melbourne Chorale, Associate Conductor of the Melbourne Symphony Orchestra, and Guest Chorus Master for the Royal Scottish National Orchestra. Graham has conducted all the major Australian orchestras, opera companies, choral societies and new and contemporary music ensembles. His reputation as an enthusiast for the music of Handel is unsurpassed, having conducted Messiah on more than seventy-five occasions in Australia, New Zealand and the UK and given first Australian performances of works including Athalia, Ariodante, Agrippina and La resurrezione and the complete Carmelite music. This year Graham continues in his role as Artistic Director for Hayllar Music Tours, curating and leading tours in Queensland, New South Wales, Victoria and to the Bendigo and Adelaide Festivals. He will conduct the inaugural Richard Gill Memorial Festival of Strings in Melbourne and return to the Auckland Philharmonia Orchestra for Unwrap the Music, to the Adelaide Symphony for the ‘Big Learning’ and to Festival of Voices Hobart. He will also make his debut with National Opera Canberra, conducting Handel’s Alcina.

ANAM The Australian National Academy of Music (ANAM) is dedicated to training the most exceptional young classical musicians from Australia and New Zealand. It is the only professional performance training institute of its kind in Australia, and one of few in the world. ANAM musicians fly between the stage and the studio; performing in over 180 events each year and receiving more than 60 hours of one-on-one training and hundreds of hours of coaching from an esteemed Faculty and impressive list of national and international guest artists. From taking meditation classes, singing Bach chorales, laying down a concerto, or building a buzz around their forthcoming gig, to learning how to work a scale, work a fugue, work a room, or work towards securing a vibrant future for classical music. They find themselves sitting cross-legged on the floor with a class of local third graders one day, to performing with the world’s finest artists on stages all across the country the next. With an outstanding track record of success, ANAM alumni work in orchestras and chamber ensembles around the world, performing as soloists, contributing to educating the next generation of musicians, and winning major national and international awards. ANAM aims to inspire these future music leaders and encourages audiences to share the experience. This performance is part of ANAM and MSO’s Orchestral Training Partnership.

Quick Facts IGOR STRAVINSKY (1882–1971) The Firebird • The Firebird was composed 1909–1910 for a ballet with story by Alexandre Benoit, choreography by Michel Fokine, scenery by Aleksandr Golovin and costumes by Leon Bakst. • The story draws on a range of sources including myths, Russian folk tales and a children’s poem. • The premiere of the ballet was on 25 June 1910 at the Opera de Paris. • The full ballet score lasts 50 minutes. • Stravinsky prepared three suites of music from The Firebird for concert performance: one in 1911, one in 1919 and one in 1945. The suites are more commonly heard in concert than the full score with the 1919 one most often performed by MSO.

Stravinsky’s Ballets For all its virtuosity and innovation, Stravinsky’s score for The Firebird was only the starting point for the rapid stylistic journey that Stravinsky undertook with Diaghilev and the Ballets Russes. Following on from the ballet’s success, Stravinsky completed the vastly divergent Petrushka and The Rite of Spring in rapid succession, taking his music into new realms that certainly surprised, and in some cases even frightened, its audiences. Indeed there were times throughout his career when Stravinsky became annoyed at well-wishers who lamented that he had abandoned the lush Romantic sounds of The Firebird so soon, and he was known to refer contemptuously to The Firebird as ‘the lollipop for audiences’. © Symphony Australia 2002/2004

Glossary Instrumentation The types and numbers of instruments used by a composer or arranger in their music. Divisi A term encountered in string parts indicating that the section divides into smaller subsections to play more than one part. So normally the first violins, for example, all play the same music. But when they are divisi they are playing two, three, or sometimes more parts.

Dialogue A term used in music to describe a texture where melodies are passed from one instrument to another, creating the sensation of a conversation. Orchestration The ways in which instruments are actually used by a composer or arranger. Syncopation A rhythm which stresses off beats rather than the regular beats in a bar.

You can hear all three of these ballets at our performance Stravinsky’s Ballets on 12–13 August 2022, 7:30pm at Hamer Hall. Tickets available at mso.com.au.

Great music and great wine. Is there a better pairing? The Barbera is ideally suited to the Yarra Valley and consistently produces a wine that is bold and full in flavour. Much like the music of Stravinsky’s Firebird, the Tarrawarra 2019 Barbara is spicy, invigorating, and surprising. Stravinsky’s quintessential tale of romance pairs perfectly with this fiery and dramatic wine, which has become a beloved classic. Stravinsky’s The Firebird, brought to you by Tarrawarra Estate and the MSO. It’s the perfect pairing.

Only 1 hour from Melbourne, TarraWarra Estate offers the perfect escape from the city. All our wines are grown and made on our picturesque 400 hectare property, with meticulous care and attention to detail producing exceptional wines. Our hatted restaurant and underground cellar door combine magnificent food, wine and architecture set amidst the rolling hills of the Yarra Valley. Friendly and professional locals complete the experience. Restaurant Open Wednesday – Sunday Cellar Door Open Tuesday – Sunday 11am – 5pm 311 HEALESVILLE – YARRA GLEN ROAD, YARRA GLEN | 03 5957 3510 | restaurant@tarrawarra.com.au 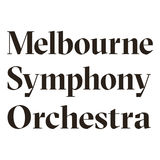