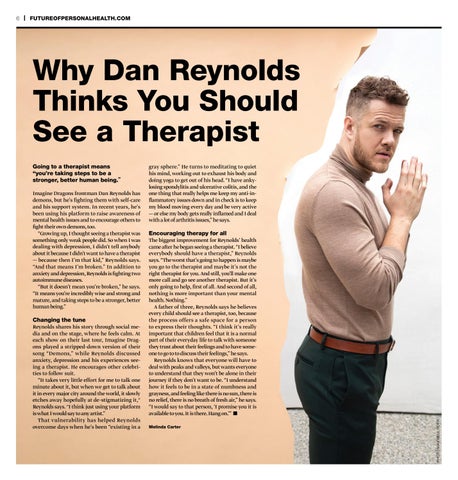 Why Dan Reynolds Thinks You Should See a Therapist Imagine Dragons frontman Dan Reynolds has demons, but he’s fighting them with self-care and his support system. In recent years, he’s been using his platform to raise awareness of mental health issues and to encourage others to fight their own demons, too. “Growing up, I thought seeing a therapist was something only weak people did. So when I was dealing with depression, I didn’t tell anybody about it because I didn’t want to have a therapist — because then I’m that kid,” Reynolds says. “And that means I’m broken.” In addition to anxiety and depression, Reynolds is fighting two autoimmune diseases. “But it doesn’t mean you’re broken,” he says. “It means you’re incredibly wise and strong and mature, and taking steps to be a stronger, better human being.” Changing the tune Reynolds shares his story through social media and on the stage, where he feels calm. At each show on their last tour, Imagine Dragons played a stripped-down version of their song “Demons,” while Reynolds discussed anxiety, depression and his experiences seeing a therapist. He encourages other celebrities to follow suit. “It takes very little effort for me to talk one minute about it, but when we get to talk about it in every major city around the world, it slowly etches away hopefully at de-stigmatizing it," Reynolds says. "I think just using your platform is what I would say to any artist.” That vulnerability has helped Reynolds overcome days when he’s been “existing in a

gray sphere.” He turns to meditating to quiet his mind, working out to exhaust his body and doing yoga to get out of his head. “I have ankylosing spondylitis and ulcerative colitis, and the one thing that really helps me keep my anti-inflammatory issues down and in check is to keep my blood moving every day and be very active — or else my body gets really inflamed and I deal with a lot of arthritis issues,” he says. Encouraging therapy for all The biggest improvement for Reynolds’ health came after he began seeing a therapist. “I believe everybody should have a therapist,” Reynolds says. “The worst that’s going to happen is maybe you go to the therapist and maybe it’s not the right therapist for you. And still, you’ll make one more call and go see another therapist. But it’s only going to help, first of all. And second of all, nothing is more important than your mental health. Nothing.” A father of three, Reynolds says he believes every child should see a therapist, too, because the process offers a safe space for a person to express their thoughts. “I think it’s really important that children feel that it is a normal part of their everyday life to talk with someone they trust about their feelings and to have someone to go to to discuss their feelings,” he says. Reynolds knows that everyone will have to deal with peaks and valleys, but wants everyone to understand that they won’t be alone in their journey if they don’t want to be. “I understand how it feels to be in a state of numbness and grayness, and feeling like there is no sun, there is no relief, there is no breath of fresh air,” he says. “I would say to that person, ‘I promise you it is available to you. It is there. Hang on.’” n Melinda Carter

Going to a therapist means “you’re taking steps to be a stronger, better human being.” 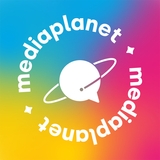