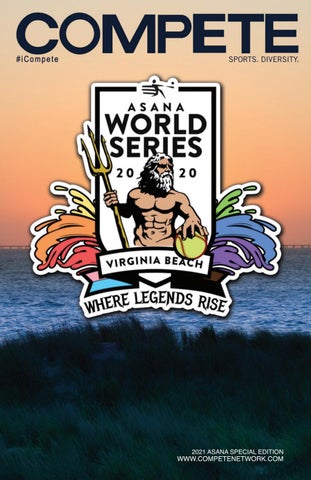 THE GLOBAL LEADER IN SPORTS DIVERSITYTM

8 THE ROOKIE, THE LEGENDS AND THE GOAT

elcome to Virginia Beach, players, coaches, managers, spouses, partners and fans. The Norfolk host city committee and the ASANA board hope you have an amazing time. We are so glad to all be back together and excited to play some softball. We have missed you all! Virginia Beach and the surrounding area have so many cool things to do. You can catch lunch or dinner on the Virginia Beach boardwalk or catch your own with a deep sea fishing experience. Either way, fresh seafood is of the bounty. Whale watching, swimming with the dolphins or just chilling on the beach, make sure to take advantage of your down time. And, don’t forget dessert or a sweet breakfast treat by visiting Duck Donuts, a local hot spot! As a wise old sea captain once said, “There are old ships and new ships, but there is nothing like friendships!” Be safe, have fun and enjoy Virginia Beach. On behalf of the ASANA Board and myself we thank you for being the future of this great organization and we look forward to many more series to come! See you around the ballpark,

THE PEANUT FOUNDATION THE PEANUT FOUNDATION The Peanut Foundation is a scholarship fund to assist in the promotion of ASANA and our active members. Scholarships are funded only by the generosity of our members, our vendors, and by public donations. Please consider making a donation at asanaseries.org. The ASANA family was sad to lose one of its founding members this year. Peanut Cole is the name sake of the Peanut Foundation. Peanut was a loyal companion to our ASANA Treasurer, Nina Cole and a staple at the ASANA World series where she could always be seen watching games, getting belly rubs or giving love to all. She will forever be a part of our hearts and be missed by all of the ASANA Family. In loving memory Peanut Cole

THE ROOKIE, THE LEGENDS AND THE GOAT! BY CONNIE WARDMAN

Having written lots of stories about the many LGBTQIA+ sports teams, leagues and organizations over the years, I know that they all have their own rules, regulations, procedures and traditions. But what turns them into living, thriving organisms are their members and their stories. (And just between you, me and the outfield, the stories of the always impressive ASANA women are among my all-time favorites!)

THE GOAT Nina Cole (she, her, hers) League: HOTLANTA Softball League (HSL) Hall of Fame Inaugural Class of 2001 Let’s start with the GOAT, the Greatest of All Time; the member who is still involved in ASANA but no is longer playing. At age 73 Nina has been AND

“Appreciate how good you have it now; people don’t judge you. Be who you are!&quot; - Nina Cole continues to be a long-term stabilizing force for queer women’s softball. Technically. women had been able to play in the NAGAAA World Series for the first time in 1985 with up to two men on their team. But this organized group for females only began in 1991 as a small female division of NAGAAA, the North American Gay Amateur Athletic Alliance, which at that time was really a huge organization for queer male softball players from the U.S. and Canada. Nina had joined the Hotlanta Softball League in 1990 coaching an A division team and by 1997 she was elected treasurer of the women’s division, a position she has continued to hold through the transition to ASANA in 2007 to today. When her current term expires in 2022, she will have spent 25 years in this important role. A few of ASANA’s current members were there as inaugural members of this new women’s division in 1991, one being Nina, who as a lesbian says she never dreamed back then that she could be part of such an open and accepting sports organization as ASANA. As a high school physical education teacher and coach in Cobb County, Georgia for 20 years, she couldn’t have her name or her picture

ROOKIE, LEGENDS, GOAT published in a newspaper. If anyone even suspected she was a lesbian, she’d have been fired on the spot and undoubtedly, news of her firing would ruin any future she’d ever again have in teaching. Sports have always been Nina’s passion. From age seven or eight she was playing softball, basketball and running track. As she grew, the leftie played left field A division softball in Atlanta until … at age 36 she was in a car wreck that crushed her hip, preventing her from ever playing again. But typical of her never quit personality, Nina has continued to champion women’s softball and offer her ASANA teammates her years of coaching experience. When I asked her what she hopes the younger people coming into ASANA will learn from her journey or understand about what women of her generation had to go through, Nina was quick to respond: “Appreciate how good you have it now; people don’t judge you. Be who you are!” Does she want more allies involved? Yes. She wants people to understand that “gays are humans, too.” The other thing she wants the younger generation to understand is that she and her generation “brought all we could for the time. We brought a small group that wasn’t well known, out.” She said they eventually “went out on a limb so you could be yourself and now it’s known worldwide; we can even ask for financial support from businesses that once would have shunned us.” As for being inducted into the very first Hall of Fame (HOF) class, Nina

said it was a WOW experience and thanked the women who gave her that opportunity. She also hopes the new HOF inductees feel that same sense of appreciation. She continued to reflect that in 2022 she will celebrate 30 years of treasured membership in NAGAAA/ ASANA and had these final words of wisdom to share: &quot;When you’re able to be part of an organization that accepts every person, no matter what, honor and cherish that!&quot;

ROOKIE, LEGENDS, GOAT Raised in a 16-story Chicago housing project with their parents, five other sisters and three brothers, there weren’t any organized sports activities for these sports-loving African American girls in their elementary and high schools. So they learned softball by playing with their brothers and other neighborhood kids in a vacant lot using a 16-inch ball without a glove, eventually moving to a 14-inch ball and finally using a glove. During weekends they even got up early to use the basketball courts uninterrupted so they could develop their basketball skills. Anita admits her first love is basketball; softball comes in at #2. But she also admits she’s excelled at softball and so she’s “played, coached and taught it … all for the ‘Love of the Game.’” In 1997 a softball team was created in Chicago for African American women athletes and their eventual fans who loved watching them play. With a foundation of spiritual awareness and diversity, a pre-game team prayer was always focused on thankfulness for being “proud, courageous and a team of ‘ONE’ on and off the field.” Honoring their African heritage, they named the team the Nubians, with a declared mission to destroy barriers created based on ethnicity, religion and sexual orientation. The initial call for members brought in Anita and Berna, both of whom are now the only two who have remained throughout as the core of the team. With Twin 1 (Anita) and Twin 2 (Berna) on the back of their jerseys, both women pitch while Anita also spends time as catcher and is the only

coach the Nubians have ever had. For all her efforts, Anita is being inducted into ASANA’s 2021 Hall of Fame class. Both twins and Nina Cole say they enjoyed the interaction they had with the guys each year at NAGAAA’s Gay Softball World Series (GSWS). But with only a women’s A division due to its size, only the best female teams could come. Creating ASANA, an allfemale organization that opened play for more women just made sense. Known for their power hitting and their tradition of thanking their opponents, the umpire and their fans with “Good game” at the end of each game no matter the outcome, the Nubians are also known for their energetic involvement with their fans, their cheering and having fun while playing the game they love. Maybe best of all, they’re also known for their generosity. Anita says they’re the only team that for the last 15 years has been in the park every Sunday holding a post-game a Bar-B-Que to feed everyone that’s there, including the park’s homeless population. The two Legends aren’t quitting softball anytime soon so if you’re in a certain Chicago park on a Sunday afternoon during softball season, bring your bib – that sauce can get messy! THE ROOKIE Bree Shoemaker (she, her, hers) League: K-Town Softball (KSL) Hall of Fame Class (only time will tell) As the Rookie, Bree Shoemaker is the young, more diverse face of ASANA. Only 20-years-old, she’s a white, straight, cisgender female who will be playing in her first ASANA World

ROOKIE, LEGENDS, GOAT Series this year with the Knoxville Fuzion. Bree’s not a sports newbie, though; by age six her dad and coach already had her in little league. All through middle and high schools Bree played both volleyball and fast pitch softball, even winning a college scholarship for fast pitch to Montreat College in North Carolina. Unfortunately, she started having lower back issues and had to red shirt her freshman year. Although she played her sophomore year, her back issues caused her to leave school in her junior year and switch to slow pitch softball.

Again, these women of ASANA – the GOAT, the Legends and the Rookie – have all proven to be exceptional, each in her own way. They and all the other members are the unbreakable warp and weft that create the strong fabric enabling ASANA to change, grow and adapt over time. It’s what keeps ASANA dynamic and vibrant. Once again, it’s certainly no surprise to me!

In 2019 Bree got a call from Brandy Crass, coach of the Knoxville Fuzion. The team was headed to a big softball tournament in Washington, D.C. on July 4th and needed a player to fill in ASAP! Within a whirlwind 2 days Bree had her bag packed and was on the plane with a whole new team; she was just old enough to play. Describing the experience as lots of fun and very inclusive, Bree says she never met a better group of women and is now excited to be in a larger softball environment. On a slightly bittersweet note, however, Bree shared that this is the first time her parents (her greatest supporters and the reason is she is who she is and where she is today) can’t be in Virginia Beach to watch her play. So Mom and Dad Shoemaker, we’re passing along a loving message of thanks and gratitude from your daughter for all you’ve done for her.

For the do-ers. The driven. The ones who recognize that they need to feed that engine of goodwill that drives their dreams, morning, noon and night. The ones with a “Heart of Gold” who know what they want, strive to do what is right, and make each day count. Good Intent lives here.

Healthy, organic drinks keeping you in sync with your natural body clock, or Circadian Rhythm, sunrise to sunset.

Use Code ASANAWINS for 20% savings 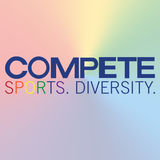 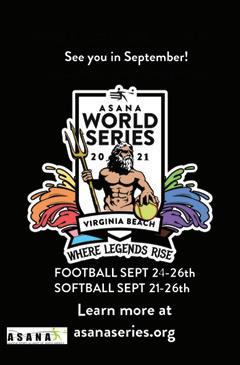 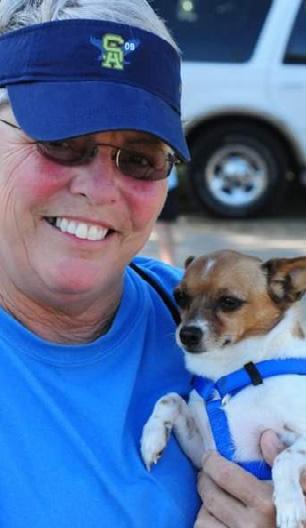 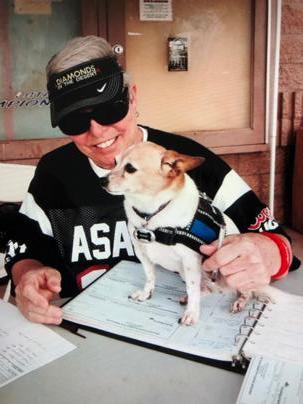 THE ROOKIE, THE LEGENDS AND THE GOAT 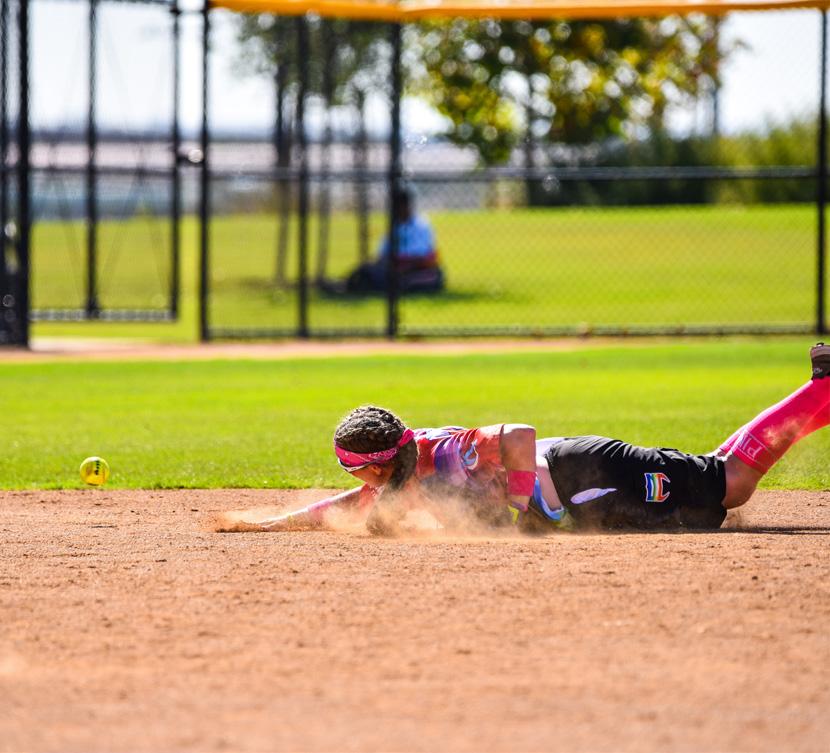