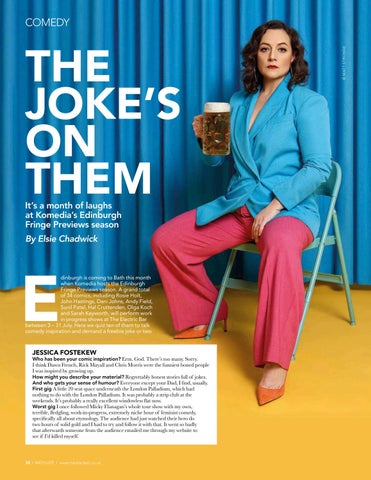 dinburgh is coming to Bath this month when Komedia hosts the Edinburgh Fringe Previews season. A grand total of 34 comics, including Rosie Holt, John Hastings, Dani Johns, Andy Field, Sunil Patel, Hal Cruttenden, Olga Koch and Sarah Keyworth, will perform work in progress shows at The Electric Bar between 3 – 31 July. Here we quiz ten of them to talk comedy inspiration and demand a freebie joke or two

Who has been your comic inspiration? Erm. God. There’s too many. Sorry.

I think Dawn French, Rick Mayall and Chris Morris were the funniest boned people I was inspired by growing up. How might you describe your material? Regrettably honest stories full of jokes. And who gets your sense of humour? Everyone except your Dad, I find, usually. First gig A little 20 seat space underneath the London Palladium, which had nothing to do with the London Palladium. It was probably a strip club at the weekends. It’s probably a really excellent windowless flat now. Worst gig I once followed Micky Flanagan’s whole tour show with my own, terrible, fledgling, work-in-progress, extremely niche hour of feminist comedy, specifically all about etymology. The audience had just watched their hero do two hours of solid gold and I had to try and follow it with that. It went so badly that afterwards someone from the audience emailed me through my website to see if I’d killed myself.

38 I BATH LIFE I www.mediaclash.co.uk