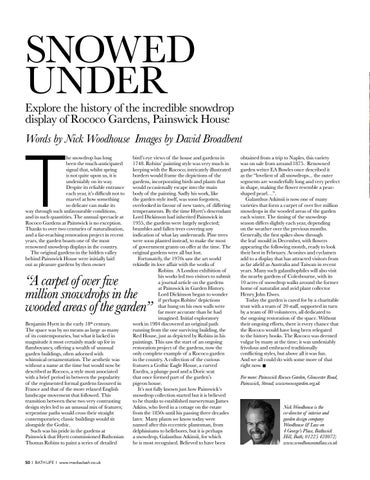 he snowdrop has long been the much-anticipated signal that, whilst spring is not quite upon us, it is undeniably on its way. Despite its reliable entrance each year, it’s difficult not to marvel at how something so delicate can make its way through such unfavourable conditions, and in such quantities. The annual spectacle at Rococo Gardens at Painswick is no exception. Thanks to over two centuries of naturalisation, and a far-reaching renovation project in recent years, the garden boasts one of the most renowned snowdrop displays in the country. The original gardens in the hidden valley behind Painswick House were initially laid out as pleasure gardens by then owner

bird’s eye views of the house and gardens in 1748. Robins’ painting style was very much in keeping with the Rococo; intricately illustrated borders would frame the depictions of the gardens, incorporating birds and plants that would occasionally escape into the main body of the painting. Sadly his work, like the garden style itself, was soon forgotten, overlooked in favour of new tastes, of differing temperaments. By the time Hyett’s descendant Lord Dickinson had inherited Painswick in 1955, the gardens were largely neglected; brambles and fallen trees covering any indication of what lay underneath. Pine trees were soon planted instead, to make the most of government grants on offer at the time. The original gardens were all but lost. Fortunately, the 1970s saw the art world rekindle its love affair with the works of Robins. A London exhibition of his works led two visitors to submit a journal article on the gardens at Painswick in Garden History. Lord Dickinson began to wonder if perhaps Robins’ depictions that hung on his own walls were far more accurate than he had imagined. Initial exploratory work in 1984 discovered an original path running from the one surviving building, the Red House, just as depicted by Robins in his paintings. This saw the start of an ongoing restoration project of the gardens, now the only complete example of a Rococo garden in the country. A collection of the curious features a Gothic Eagle House, a curved Exedra, a plunge pool and a Doric seat that once formed part of the garden’s pigeon house. It’s not fully known just how Painswick’s snowdrop collection started but it is believed to be thanks to established nurseryman James Atkins, who lived in a cottage on the estate from the 1850s until his passing three decades later. Many plants we know today were named after this eccentric plantsman, from delphiniums to hellebores, but it is perhaps a snowdrop, Galanthus Atkinsii, for which he is most recognised. Believed to have been

“A carpet of over five million snowdrops in the wooded areas of the garden” Benjamin Hyett in the early 18th century. The space was by no means as large as many of its contemporaries, but what it lacked in magnitude it most certainly made up for in flamboyancy, offering a wealth of unusual garden buildings, often adorned with whimsical ornamentation. The aesthetic was without a name at the time but would now be described as Rococo, a style most associated with a brief period in between the popularity of the regimented formal gardens favoured in France and that of the more relaxed English landscape movement that followed. This transition between these two very contrasting design styles led to an unusual mix of features; serpentine paths would cross their straight contemporaries; classic buildings would sit alongside the Gothic. Such was his pride in the gardens at Painswick that Hyett commissioned Bathonian Thomas Robins to paint a series of detailed

50 I BATH LIFE I www.mediaclash.co.uk

obtained from a trip to Naples, this variety was on sale from around 1875. Renowned garden writer EA Bowles once described it as the “loveliest of all snowdrops... the outer segments are wonderfully long and very perfect in shape, making the flower resemble a pearshaped pearl…”. Galanthus Atkinsii is now one of many varieties that form a carpet of over five million snowdrops in the wooded areas of the garden each winter. The timing of the snowdrop season differs slightly each year, depending on the weather over the previous months. Generally, the first spikes show through the leaf mould in December, with flowers appearing the following month, ready to look their best in February. Aconites and cyclamen add to a display that has attracted visitors from as far afield as Australia and Taiwan in recent years. Many such galanthophiles will also visit the nearby gardens of Colesbourne, with its 10 acres of snowdrop walks around the former home of naturalist and avid plant collector Henry John Elwes. Today the garden is cared for by a charitable trust with a team of 20 staff, supported in turn by a team of 80 volunteers, all dedicated to the ongoing restoration of the space. Without their ongoing efforts, there is every chance that the Rococo would have long been relegated to the history books. The Rococo was deemed vulgar by many at the time; it was undeniably frivolous and embraced traditionally conflicting styles, but above all it was fun. And we all could do with some more of that right now. For more: Painswick Rococo Garden, Gloucester Road, Painswick, Stroud; wwwrococogarden.org.uk