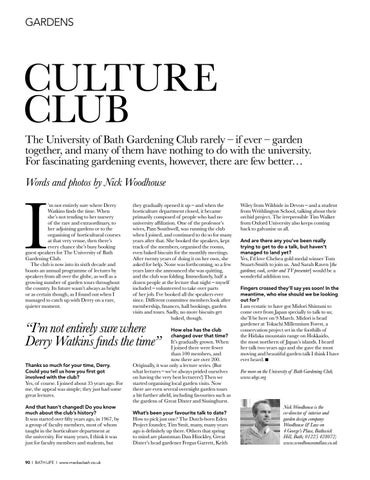 The University of Bath Gardening Club rarely – if ever – garden together, and many of them have nothing to do with the university. For fascinating gardening events, however, there are few better… Words and photos by Nick Woodhouse

’m not entirely sure where Derry Watkins finds the time. When she’s not tending to her nursery of the rare and extraordinary, to her adjoining gardens or to the organising of horticultural courses at that very venue, then there’s every chance she’s busy booking guest speakers for The University of Bath Gardening Club. The club is now into its sixth decade and boasts an annual programme of lectures by speakers from all over the globe, as well as a growing number of garden tours throughout the country. Its future wasn’t always as bright or as certain though, as I found out when I managed to catch up with Derry on a rare, quieter moment.

they gradually opened it up – and when the horticulture department closed, it became primarily composed of people who had no university affiliation. One of the professor’s wives, Pam Southwell, was running the club when I joined, and continued to do so for many years after that. She booked the speakers, kept track of the members, organised the rooms, even baked biscuits for the monthly meetings. After twenty years of doing it on her own, she asked for help. None was forthcoming, so a few years later she announced she was quitting, and the club was folding. Immediately, half a dozen people at the lecture that night – myself included – volunteered to take over parts of her job. I’ve booked all the speakers ever since. Different committee members look after membership, finances, hall bookings, garden visits and tours. Sadly, no more biscuits get baked, though.

“I’m not entirely sure where Derry Watkins finds the time” Thanks so much for your time, Derry. Could you tell us how you first got involved with the club?

Yes, of course. I joined about 35 years ago. For me, the appeal was simple; they just had some great lectures. And that hasn’t changed! Do you know much about the club’s history?

It was started over fifty years ago, in 1967, by a group of faculty members, most of whom taught in the horticulture department at the university. For many years, I think it was just for faculty members and students, but

90 I BATH LIFE I www.mediaclash.co.uk

How else has the club changed over that time?

It’s gradually grown. When I joined there were fewer than 100 members, and now there are over 200. Originally, it was only a lecture series. (But what lectures – we’ve always prided ourselves on having the very best lecturers!) Then we started organising local garden visits. Now there are even several overnight garden tours a bit further afield, including favourites such as the gardens of Great Dixter and Sissinghurst.

What’s been your favourite talk to date?

How to pick just one? The Dutch-born Eden Project founder, Tim Smit, many, many years ago is definitely up there. Others that spring to mind are plantsman Dan Hinckley, Great Dixter’s head gardener Fergus Garrett, Keith

Wiley from Wildside in Devon – and a student from Writhlington School, talking about their orchid project. The irrepressible Tim Walker from Oxford University also keeps coming back to galvanise us all. And are there any you’ve been really trying to get to do a talk, but haven’t managed to land yet?

Yes, I’d love Chelsea gold medal winner Tom Stuart-Smith to join us. And Sarah Raven [the gardener, cook, writer and TV presenter] would be a wonderful addition too. Fingers crossed they’ll say yes soon! In the meantime, who else should we be looking out for?

I am ecstatic to have got Midori Shintani to come over from Japan specially to talk to us; she’ll be here on 9 March. Midori is head gardener at Tokachi Millennium Forest, a conservation project set in the foothills of the Hidaka mountain range on Hokkaido, the most northern of Japan’s islands. I heard her talk two years ago and she gave the most moving and beautiful garden talk I think I have ever heard. For more on the University of Bath Gardening Club, www.ubgc.org