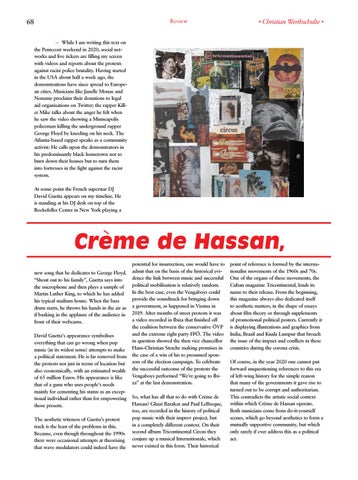 − While I am writing this text on the Pentecost weekend in 2020, social networks and live tickers are filling my screen with videos and reports about the protests against racist police brutality. Having started in the USA about half a week ago, the demonstrations have since spread to European cities. Musicians like Janelle Monae and Noname proclaim their donations to legal aid organisations on Twitter; the rapper Killer Mike talks about the anger he felt when he saw the video showing a Minneapolis policeman killing the underground rapper George Floyd by kneeling on his neck. The Atlanta-based rapper speaks as a community activist: He calls upon the demonstrators in his predominantly black hometown not to burn down their houses but to turn them into fortresses in the fight against the racist system. At some point the French superstar DJ David Guetta appears on my timeline. He is standing at his DJ desk on top of the Rockefeller Center in New York playing a

Creme de Hassan, new song that he dedicates to George Floyd. “Shout out to his family”, Guetta says into the microphone and then plays a sample of Martin Luther King, to which he has added his typical stadium house. When the bass drum starts, he throws his hands in the air as if basking in the applause of the audience in front of their webcams. David Guetta’s appearance symbolises everything that can go wrong when pop music (in its widest sense) attempts to make a political statement. He is far removed from the protests not just in terms of location but also economically, with an estimated wealth of 65 million Euros. His appearance is like that of a guru who uses people’s needs mainly for cementing his status as an exceptional individual rather than for empowering those present. The aesthetic triteness of Guetta’s protest track is the least of the problems in this. Because, even though throughout the 1990s there were occasional attempts at theorising that wave modulators could indeed have the

potential for insurrection, one would have to admit that on the basis of the historical evidence the link between music and successful political mobilisation is relatively random. In the best case, even the Vengaboys could provide the soundtrack for bringing down a government, as happened in Vienna in 2019. After months of street protests it was a video recorded in Ibiza that finished off the coalition between the conservative ÖVP and the extreme right party FPÖ. The video in question showed the then vice chancellor Hans-Christian Strache making promises in the case of a win of his to presumed sponsors of the election campaign. To celebrate the successful outcome of the protests the Vengaboys performed “We’re going to Ibiza” at the last demonstration. So, what has all that to do with Crème de Hassan? Ghazi Barakat and Paul LeBreque, too, are recorded in the history of political pop music with their improv project, but in a completely different context. On their second album Tricontinental Circus they conjure up a musical Internationale, which never existed in this form. Their historical

point of reference is formed by the internationalist movements of the 1960s and 70s. One of the organs of these movements, the Cuban magazine Tricontinental, lends its name to their release. From the beginning, this magazine always also dedicated itself to aesthetic matters, in the shape of essays about film theory or through supplements of promotional political posters. Currently it is displaying illustrations and graphics from India, Brazil and Kuala Lumpur that broach the issue of the impact and conflicts in these countries during the corona crisis. Of course, in the year 2020 one cannot put forward unquestioning references to this era of left-wing history for the simple reason that many of the governments it gave rise to turned out to be corrupt and authoritarian. This contradicts the artistic social context within which Crème de Hassan operate. Both musicians come from do-it-yourself scenes, which go beyond aesthetics to form a mutually supportive community, but which only rarely if ever address this as a political act.