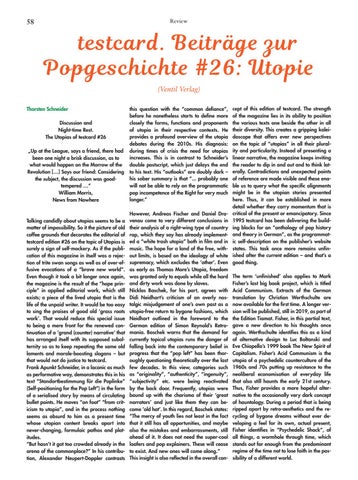 „Up at the League, says a friend, there had been one night a brisk discussion, as to what would happen on the Morrow of the Revolution […] Says our friend: Considering the subject, the discussion was goodtempered …“ William Morris, News from Nowhere

this question with the “common defiance”, before he nonetheless starts to define more closely the forms, functions and proponents of utopia in their respective contexts. He provides a profound overview of the utopia debates during the 2010s. His diagnosis: during times of crisis the need for utopias increases. This is in contrast to Schneider’s double postscript, which just delays the end to his text. His “outlooks” are doubly dark – his sober summary is that “... probably one will not be able to rely on the programmatic pop incompetence of the Right for very much longer.”

Talking candidly about utopias seems to be a matter of impossibility. So it the picture of old coffee grounds that decorates the editorial of testcard edition #26 on the topic of Utopias is surely a sign of self-mockery. As if the publication of this magazine in itself was a rejection of trite swan songs as well as of over-effusive evocations of a “brave new world”. Even though it took a bit longer once again, the magazine is the result of the “hope principle” in applied editorial work, which still exists; a piece of the lived utopia that is the life of the unpaid writer. It would be too easy to sing the praises of good old ‘grass roots work’. That would reduce this special issue to being a mere front for the renewed continuation of a ‘grand (counter) narrative’ that has arranged itself with its supposed subalternity so as to keep repeating the same old laments and morale-boosting slogans – but that would not do justice to testcard. Frank Apunkt Schneider, in a laconic as much as performative way, demonstrates this in his text “Standortbestimmung für die Poplinke” (Self-positioning for the Pop Left”) in the form of a serialised story by means of circulating bullet points. He moves “on foot” “from criticism to utopia”, and in the process nothing seems as absurd to him as a present time whose utopian content breaks apart into never-changing, formulaic pathos and platitudes. “But hasn’t it got too crowded already in the arena of the commonplace?” In his contribution, Alexander Neupert-Doppler contrasts

However, Andreas Fischer and Daniel Dravenau come to very different conclusions in their analysis of a right-wing type of country rap, which they say has already implemented a “white trash utopia” both in film and in music. The hope for a land of the free, without limits, is based on the ideology of white supremacy, which excludes the ‘other’. Even as early as Thomas More’s Utopia, freedom was granted only to equals while all the hard and dirty work was done by slaves. Nicklas Baschek, for his part, agrees with Didi Neidhart’s criticism of an overly nostalgic misjudgement of one’s own past as a utopia-free return to bygone fashions, which Neidhart outlined in the foreword to the German edition of Simon Reynold’s Retromania. Baschek warns that the demand for currently topical utopias runs the danger of falling back into the contemporary belief in progress that the “pop left” has been thoroughly questioning theoretically over the last few decades. In this view, categories such as “originality”, “authenticity”, “ingenuity”, “subjectivity” etc. were being reactivated by the back door. Frequently, utopias were bound up with the charisma of their ‘great narrators’ and just like them they can become ‘old hat’. In this regard, Baschek states: “The mercy of youth lies not least in the fact that it still has all opportunities, and maybe also the mistakes and embarrassments, still ahead of it. It does not need the super-cool loafers and pop explainers. These will cease to exist. And new ones will come along.” This insight is also reflected in the overall con-

Thorsten Schneider Discussion and Night-time Rest. The Utopias of testcard #26

cept of this edition of testcard. The strength of the magazine lies in its ability to position the various texts one beside the other in all their diversity. This creates a gripping kaleidoscope that offers ever new perspectives on the topic of “utopias” in all their plurality and particularity. Instead of presenting a linear narrative, the magazine keeps inviting the reader to dip in and out and to think laterally. Contradictions and unexpected points of reference are made visible and these enable us to query what the specific alignments might be in the utopian stories presented here. Thus, it can be established in more detail whether they carry momentum that is critical of the present or emancipatory. Since 1995 testcard has been delivering the building blocks for an “anthology of pop history and theory in German”, as the programmatic self-description on the publisher’s website states. This task once more remains unfinished after the current edition – and that’s a good thing. The term ‘unfinished’ also applies to Mark Fisher’s last big book project, which is titled Acid Communism. Extracts of the German translation by Christian Werthschulte are now available for the first time. A longer version will be published, still in 2019, as part of the Edition Tiamat. Fisher, in this partial text, gave a new direction to his thoughts once again. Werthschulte identifies this as a kind of alternative design to Luc Boltanski and Eve Chiapello’s 1999 book The New Spirit of Capitalism. Fisher’s Acid Communism is the utopia of a psychedelic counterculture of the 1960s and 70s putting up resistance to the neoliberal economisation of everyday life that also still haunts the early 21st century. Thus, Fisher provides a more hopeful alternative to the occasionally very dark concept of hauntology. During a period that is being ripped apart by retro-aesthetics and the recycling of bygone dreams without ever developing a feel for its own, actual present, Fisher identifies in “Psychedelic Shack“, of all things, a wormhole through time, which stands out far enough from the predominant regime of the time not to lose faith in the possibility of a different world.