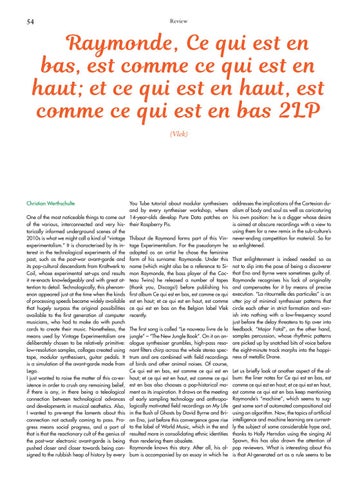 You Tube tutorial about modular synthesisers and by every synthesiser workshop, where One of the most noticeable things to come out 14-year-olds develop Pure Data patches on of the various, interconnected and very his- their Raspberry Pis. torically informed underground scenes of the 2010s is what we might call a kind of “vintage Thibaut de Raymond forms part of this Vinexperimentalism.” It is characterised by its in- tage Experimentalism. For the pseudonym he terest in the technological experiments of the adopted as an artist he chose the feminine past, such as the post-war avant-garde and form of his surname: Raymonde. Under this its pop-cultural descendants from Kraftwerk to name (which might also be a reference to SiCoil, whose experimental set-ups and results mon Raymonde, the bass player of the Cocit re-enacts knowledgeably and with great at- teau Twins) he released a number of tapes tention to detail. Technologically, this phenom- (thank you, Discogs!) before publishing his enon appeared just at the time when the kinds first album Ce qui est en bas, est comme ce qui of processing speeds became widely available est en haut; et ce qui est en haut, est comme that hugely surpass the original possibilities ce qui est en bas on the Belgian label Vlek available to the first generation of computer recently. musicians, who had to make do with punch cards to create their music. Nonetheless, the The first song is called “Le nouveau livre de la means used by Vintage Experimentalism are jungle” – “The New Jungle Book”. On it an andeliberately chosen to be relatively primitive: alogue synthesiser grumbles, high-pass resolow-resolution samples, collages created using nant filters chirp across the whole stereo spectape, modular synthesisers, guitar pedals. It trum and are combined with field recordings is a simulation of the avant-garde made from of birds and other animal noises. Of course, Ce qui est en bas, est comme ce qui est en Lego. I just wanted to raise the matter of this co-ex- haut; et ce qui est en haut, est comme ce qui istence in order to crush any remaining belief, est en bas also chooses a pop-historical moif there is any, in there being a teleological ment as its inspiration. It draws on the meeting connection between technological advances of early sampling technology and anthropoand developments in musical aesthetics. Also, logically motivated field recordings on My Life I wanted to pre-empt the laments about this in the Bush of Ghosts by David Byrne and Briconnection not actually coming to pass. Pro- an Eno, just before this convergence gave rise gress means social progress, and a part of to the label of World Music, which in the end that is that the reactionary cult of the genius of resulted more in consolidating ethnic identities the post-war electronic avant-garde is being than rendering them obsolete. pushed closer and closer towards being con- Raymonde knows this story. After all, his alsigned to the rubbish heap of history by every bum is accompanied by an essay in which he Christian Werthschulte

addresses the implications of the Cartesian dualism of body and soul as well as caricaturing his own position: he is a digger whose desire is aimed at obscure recordings with a view to using them for a new remix in the sub-culture’s never-ending competition for material. So far so enlightened. That enlightenment is indeed needed so as not to slip into the pose of being a discoverer that Eno and Byrne were sometimes guilty of. Raymonde recognises his lack of originality and compensates for it by means of precise execution. “La ritournelle des particules” is an utter joy of minimal synthesiser patterns that circle each other in strict formation and vanish into nothing with a low-frequency sound just before the delay threatens to tip over into feedback. “Major Fatal”, on the other hand, samples percussion, whose rhythmic patterns are picked up by snatched bits of voice before the eight-minute track morphs into the happiness of metallic Drone. Let us briefly look at another aspect of the album: the liner notes for Ce qui est en bas, est comme ce qui est en haut; et ce qui est en haut, est comme ce qui est en bas keep mentioning Raymonde’s “machine”, which seems to suggest some sort of automated compositional aid using an algorithm. Now, the topics of artificial intelligence and machine learning are currently the subject of some considerable hype and, thanks to Holly Herndon using the singing AI Spawn, this has also drawn the attention of pop reviewers. What is interesting about this is that AI-generated art as a rule seems to be