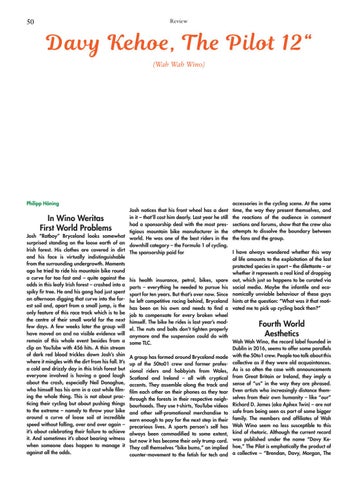 Philipp Höning Josh notices that his front wheel has a dent in it – that’ll cost him dearly. Last year he still In Wino Weritas had a sponsorship deal with the most presFirst World Problems tigious mountain bike manufacturer in the Josh “Ratboy” Bryceland looks somewhat world. He was one of the best riders in the surprised standing on the loose earth of an downhill category – the Formula 1 of cycling. Irish forest. His clothes are covered in dirt The sponsorship paid for and his face is virtually indistinguishable from the surrounding undergrowth. Moments ago he tried to ride his mountain bike round a curve far too fast and – quite against the his health insurance, petrol, bikes, spare odds in this leafy Irish forest – crashed into a parts – everything he needed to pursue his spiky fir tree. He and his gang had just spent sport for ten years. But that’s over now. Since an afternoon digging that curve into the for- he left competitive racing behind, Bryceland est soil and, apart from a small jump, is the has been on his own and needs to find a only feature of this race track which is to be job to compensate for every broken wheel the centre of their small world for the next himself. The bike he rides is last year’s modfew days. A few weeks later the group will el. The nuts and bolts don’t tighten properly have moved on and no visible evidence will anymore and the suspension could do with remain of this whole event besides from a some TLC. clip on YouTube with 456 hits. A thin stream of dark red blood trickles down Josh’s shin A group has formed around Bryceland made where it mingles with the dirt from his fall. It’s up of the 50to01 crew and former profesa cold and drizzly day in this Irish forest but sional riders and hobbyists from Wales, everyone involved is having a good laugh Scotland and Ireland – all with cryptical about the crash, especially Neil Donoghue, accents. They assemble along the track and who himself has his arm in a cast while film- film each other on their phones as they tear ing the whole thing. This is not about prac- through the forests in their respective neighticing their cycling but about pushing things bourhoods. They use t-shirts, YouTube videos to the extreme – namely to throw your bike and other self-promotional merchandise to around a curve of loose soil at incredible earn enough to pay for the next step in their speed without falling, over and over again – precarious lives. A sports person‘s self has it’s about celebrating their failure to achieve always been commodified to some extent, it. And sometimes it’s about bearing witness but now it has become their only trump card. when someone does happen to manage it They call themselves “bike bums,” an implied against all the odds. counter-movement to the fetish for tech and

accessories in the cycling scene. At the same time, the way they present themselves, and the reactions of the audience in comment sections and forums, show that the crew also attempts to dissolve the boundary between the fans and the group. I have always wondered whether this way of life amounts to the exploitation of the last protected species in sport – the dilettante – or whether it represents a real kind of dropping out, which just so happens to be curated via social media. Maybe the infantile and economically unviable behaviour of these guys hints at the question: “What was it that motivated me to pick up cycling back then?”

Wah Wah Wino, the record label founded in Dublin in 2016, seems to offer some parallels with the 50to1 crew. People too talk about this collective as if they were old acquaintances. As is so often the case with announcements from Great Britain or Ireland, they imply a sense of “us” in the way they are phrased. Even artists who increasingly distance themselves from their own humanity – like “our” Richard D. James (aka Aphex Twin) – are not safe from being seen as part of some bigger family. The members and affiliates of Wah Wah Wino seem no less susceptible to this kind of rhetoric. Although the current record was published under the name “Davy Kehoe,” The Pilot is emphatically the product of a collective – “Brendan, Davy, Morgan, The