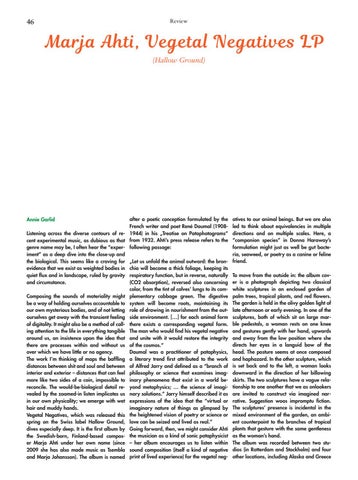 after a poetic conception formulated by the French writer and poet René Daumal (1908Listening across the diverse contours of re- 1944) in his „Treatise on Pataphotograms“ cent experimental music, as dubious as that from 1932. Ahti’s press release refers to the genre name may be, I often hear the “exper- following passage: iment” as a deep dive into the close-up and the biological. This seems like a craving for „Let us unfold the animal outward: the bronevidence that we exist as weighted bodies in chia will become a thick foliage, keeping its quiet flux and in landscape, ruled by gravity respiratory function, but in reverse, naturally (CO2 absorption), reversed also concerning and circumstance. color, from the tint of calves’ lungs to its comComposing the sounds of materiality might plementary cabbage green. The digestive be a way of holding ourselves accountable to system will become roots, maintaining its our own mysterious bodies, and of not letting role of drawing in nourishment from the outourselves get away with the transient feeling side environment. […] for each animal form of digitality. It might also be a method of call- there exists a corresponding vegetal form. ing attention to the life in everything tangible The man who would find his vegetal negative around us, an insistence upon the idea that and unite with it would restore the integrity there are processes within and without us of the cosmos.“ Daumal was a practitioner of pataphysics, over which we have little or no agency. The work I’m thinking of maps the baffling a literary trend first attributed to the work distances between shit and soul and between of Alfred Jarry and defined as a “branch of interior and exterior – distances that can feel philosophy or science that examines imagmore like two sides of a coin, impossible to inary phenomena that exist in a world bereconcile. The would-be-biological detail re- yond metaphysics; … the science of imagivealed by the zoomed-in listen implicates us nary solutions.” Jarry himself described it as in our own physicality; we emerge with wet expressions of the idea that the “virtual or imaginary nature of things as glimpsed by hair and muddy hands. Vegetal Negatives, which was released this the heightened vision of poetry or science or spring on the Swiss label Hallow Ground, love can be seized and lived as real.” dives especially deep. It is the first album by Going forward, then, we might consider Ahti the Swedish-born, Finland-based compos- the musician as a kind of sonic pataphysicist er Marja Ahti under her own name (since – her album encourages us to listen within 2009 she has also made music as Tsembla sound composition (itself a kind of negative and Marja Johansson). The album is named print of lived experience) for the vegetal negAnnie Garlid

atives to our animal beings. But we are also led to think about equivalencies in multiple directions and on multiple scales. Here, a “companion species” in Donna Haraway’s formulation might just as well be gut bacteria, seaweed, or poetry as a canine or feline friend. To move from the outside in: the album cover is a photograph depicting two classical white sculptures in an enclosed garden of palm trees, tropical plants, and red flowers. The garden is held in the olivy golden light of late afternoon or early evening. In one of the sculptures, both of which sit on large marble pedestals, a woman rests on one knee and gestures gently with her hand, upwards and away from the low position where she directs her eyes in a languid bow of the head. The posture seems at once composed and haphazard. In the other sculpture, which is set back and to the left, a woman looks downward in the direction of her billowing skirts. The two sculptures have a vague relationship to one another that we as onlookers are invited to construct via imagined narrative. Suggestion woos impromptu fiction. The sculptures’ presence is incidental in the mixed environment of the garden, an ambient counterpoint to the branches of tropical plants that gesture with the same gentleness as the woman’s hand. The album was recorded between two studios (in Rotterdam and Stockholm) and four other locations, including Alaska and Greece