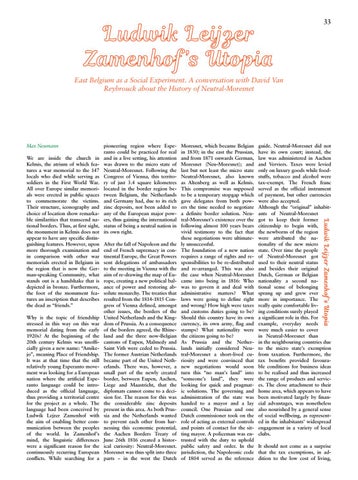 Why is the topic of friendship stressed in this way on this war memorial dating from the early 1920s? At the beginning of the 20th century Kelmis was unofficially given a new name: “Amikejo”, meaning Place of Friendship. It was at that time that the still relatively young Esperanto movement was looking for a European nation where the artificial Esperanto language could be introduced as the official language, thus providing a territorial centre for the project as a whole. The language had been conceived by Ludwik Lejzer Zamenhof with the aim of enabling better communication between the peoples of the world. In Zamenhof’s mind, the linguistic differences were a significant reason for the continuously recurring European conflicts. While searching for a

After the fall of Napoleon and the end of French supremacy in continental Europe, the Great Powers sent delegations of ambassadors to the meeting in Vienna with the aim of re-drawing the map of Europe, creating a new political balance of power and restoring absolute monarchy. The treaties that resulted from the 1814-1815 Congress of Vienna defined, amongst other issues, the borders of the United Netherlands and the Kingdom of Prussia. As a consequence of the borders agreed, the Rhineland and the three now-Belgian cantons of Eupen, Malmedy and Saint Vith were ceded to Prussia. The former Austrian Netherlands became part of the United Netherlands. There was, however, a small part of the newly created border, between Eupen, Aachen, Liege and Maastricht, that the diplomats cannot come to a decision for. The reason for this was the considerable zinc deposits present in this area. As both Prussia and the Netherlands wanted to prevent each other from harnessing this economic potential, the Aachen Borders Treaty of June 26th 1816 created a historical curiosity: Neutral-Moresnet. Moresnet was thus split into three parts – in the west the Dutch

Moresnet, which became Belgian in 1830; in the east the Prussian, and from 1871 onwards German, Moresnet (Neu-Moresnet); and last but not least the micro state Neutral-Moresnet, also known as Altenberg as well as Kelmis. This compromise was supposed to be a temporary stopgap which gave delegates from both powers the time needed to negotiate a definite border solution. Neutral-Moresnet’s existence over the following almost 100 years bears vivid testimony to the fact that these negotiations were ultimately unsuccessful. The foundation of a new nation requires a range of rights and responsibilities to be re-distributed and re-arranged. This was also the case when Neutral-Moresnet came into being in 1816: Who was to govern it and deal with administrative matters? What laws were going to define right and wrong? How high were taxes and customs duties going to be? Should this country have its own currency, its own army, flag and stamps? What nationality were the citizens going to be? As Prussia and the Netherlands initially considered Neutral-Moresnet a short-lived curiosity and were convinced that new negotiations would soon turn this “no man’s land” into “someone’s land”, they were looking for quick and pragmatic solutions. The governing and administration of the state was handed to a mayor and a lay council. One Prussian and one Dutch commissioner took on the role of acting as external controls and points of contact for the sitting mayor. A policeman was entrusted with the duty to uphold public safety and order. In the jurisdiction, the Napoleonic code of 1804 served as the reference

guide. Neutral-Moresnet did not have its own court; instead, the law was administered in Aachen and Verviers. Taxes were levied only on luxury goods while foodstuffs, tobacco and alcohol were tax-exempt. The French franc served as the official instrument of payment, but other currencies were also accepted. Although the “original” inhabitants of Neutral-Moresnet got to keep their former citizenship to begin with, the newborns of the region were attributed the nationality of the new micro state. Over time the people of Neutral-Moresnet got used to their neutral status and besides their original Dutch, German or Belgian nationality a second national sense of belonging sprang up and grew ever more in importance. The really quite comfortable living conditions surely played a significant role in this. For example, everyday needs were much easier to cover in Neutral-Moresnet than in the neighbouring countries due to the micro state’s exemption from taxation. Furthermore, the tax benefits provided favourable conditions for business ideas to be realised and thus increased the range of products and services. The close attachment to their home area, which appears to have been motivated largely by financial advantages, was nonetheless also nourished by a general sense of social wellbeing, as represented in the inhabitants’ widespread engagement in a variety of local clubs.

We are inside the church in Kelmis, the atrium of which features a war memorial to the 147 locals who died while serving as soldiers in the First World War. All over Europe similar memorials were erected in public spaces to commemorate the victims. Their structure, iconography and choice of location show remarkable similarities that transcend national borders. Thus, at first sight, the monument in Kelmis does not appear to have any specific distinguishing features. However, upon more thorough examination and in comparison with other war memorials erected in Belgium in the region that is now the German-speaking Community, what stands out is a handshake that is depicted in bronze. Furthermore, the foot of the monument features an inscription that describes the dead as “friends.”

pioneering region where Esperanto could be practiced for real and in a live setting, his attention was drawn to the micro state of Neutral-Moresnet. Following the Congress of Vienna, this territory of just 3.4 square kilometres located in the border region between Belgium, the Netherlands and Germany had, due to its rich zinc deposits, not been added to any of the European major powers, thus gaining the international status of being a neutral nation in its own right.

It should not come as a surprise that the tax exemptions, in addition to the low cost of living,