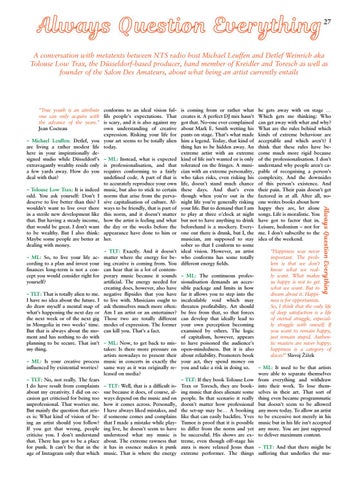 A conversation with metatexts between NTS radio host Michael Leuffen and Detlef Weinrich aka Tolouse Low Trax, the Düsseldorf-based producer, band member of Kreidler and Toresch as well as founder of the Salon Des Amateurs, about what being an artist currently entails

“True youth is an attribute one can only acquire with the advance of the years.” Jean Cocteau

is coming from or rather what creates it. A perfect DJ mix hasn’t got that. No-one ever complained about Mark E. Smith wetting his pants on stage. That’s what made him a legend. Today, that kind of thing has to be hidden away. An extreme artist with an extreme kind of life isn’t wanted or is only tolerated on the fringes. A musician with an extreme personality, who takes risks, even risking his life, doesn’t stand much chance these days. And that’s even though when you’re out in the night life you’re generally risking your life. But to demand that I am to play at three o’clock at night but not to have anything to drink beforehand is a mockery. Everyone out there is drunk, but I, the musician, am supposed to stay sober so that I conform to some ideal vision. However, an artist who conforms has some totally different energy fields.

he gets away with on stage … Which gets me thinking: Who can get away with what and why? What are the rules behind which kinds of extreme behaviour are acceptable and which aren’t? I think that these rules have become much more rigid because of the professionalisation. I don’t understand why people aren’t capable of recognising a person’s complexity. And the downsides of this person’s existence. And their pain. Their pain doesn’t get factored in at all. After all, noone writes books about how happy they are, let alone songs. Life is moralistic. You have got to factor that in. Leisure, hedonism – not for me. I don’t subscribe to the idea of the weekend.

conforms to an ideal vision fulfils people’s expectations. That is scary, and it is also against my own understanding of creative expression. Risking your life for ~ Michael Leuffen: Detlef, you your art seems to be totally alien are living a rather modest life today. here in your inspirationally designed studio while Düsseldorf’s ~ ML: Instead, what is expected extravagantly wealthy reside only is professionalisation, and that a few yards away. How do you requires conforming to a fairly deal with that? undefined code. A part of that is to accurately reproduce your own ~ Tolouse Low Trax: It is indeed music, but also to stick to certain odd. You ask yourself: Don’t I norms that arise from the pervadeserve to live better than this? I sive capitalisation of culture. Alwouldn’t want to live over there ways to be friendly, that is part of in a sterile new development like this norm, and it doesn’t matter that. But having a steady income, how the artist is feeling and what that would be great. I don’t want the day or the weeks before the to be wealthy. But I also think: appearance have done to him or Maybe some people are better at her. dealing with money. ~ TLT: Exactly. And it doesn’t ~ ML: So, to live your life ac- matter where the energy for becording to a plan and invest your ing creative is coming from. You finances long-term is not a con- can hear that in a lot of contemcept you would consider right for porary music because it sounds yourself? artificial. The energy needed for creating does, however, also have ~ TLT: That is totally alien to me. negative flipsides that you have I have no idea about the future. I to live with. Musicians ought to do draw myself a mental map of ask themselves much more often: what’s happening the next day or Am I an artist or an entertainer? the next week or of the next gig Those two are totally different in Mongolia in two weeks’ time. modes of expression. The former But that is always about the mo- can kill you. That’s a fact. ment and has nothing to do with planning to be secure. That isn’t ~ ML: Now, to get back to mismy thing. takes: Is there more pressure on artists nowadays to present their ~ ML: Is your creative process music in concerts in exactly the influenced by existential worries? same way as it was originally released on media? ~ TLT: No, not really. The fears I do have result from complaints ~ TLT: Well, that is a difficult isabout my creativity. I did on oc- sue because it does, of course, alcasion get criticised for being too ways depend on the music and on unprofessional. That worries me. how it comes across. Personally, But mainly the question that aris- I have always liked mistakes, and es is: What kind of vision of be- if someone comes and complains ing an artist should you follow? that I made a mistake while playIf you get that wrong, people ing live, he doesn’t seem to have criticise you. I don’t understand understood what my music is that. There has got to be a place about. The extreme rawness that for punk. It can’t be that in the it has in essence makes it punk age of Instagram only that which music. That is where the energy

“Happiness was never important. The problem is that we don’t know what we really want. What makes us happy is not to get what we want. But to dream about it. Happiness is for opportunists. So, I think that the only life of deep satisfaction is a life of eternal struggle, especially struggle with oneself. If you want to remain happy, just remain stupid. Authentic masters are never happy; happiness is a category of slaves!” Slavoj Žižek

~ ML: The continuous professionalisation demands an accessible package and limits in how far it allows you to step into the incalculable void which may threaten profitability. Art should be free from that, so that forces can develop that ideally lead to your own perception becoming examined by others. The logic of capitalism, however, appears to have poisoned the audience’s open-mindedness. But it is also about reliability. Promoters book your act, they spend money on you and take a risk in doing so. ~ ML: It used to be that artists were able to separate themselves ~ TLT: If they book Tolouse Low from everything and withdraw Trax or Toresch, they are book- into their work. To lose theming music that does alienate some selves in their art. That sort of people. In that scenario it really thing even became programmatic doesn’t matter how professional but doesn’t seem to be allowed the set-up may be… A booking any more today. To allow an artist like that can easily backfire. Yves to be excessive not merely in his Tumor is proof that it is possible music but in his life isn’t accepted to differ from the norm and yet any more. You are just supposed be successful. His shows are ex- to deliver maximum content. treme, even though off-stage his aura is more relaxed Jesus than ~ TLT: And that there might be extreme performer. The things suffering that underlies the mu-