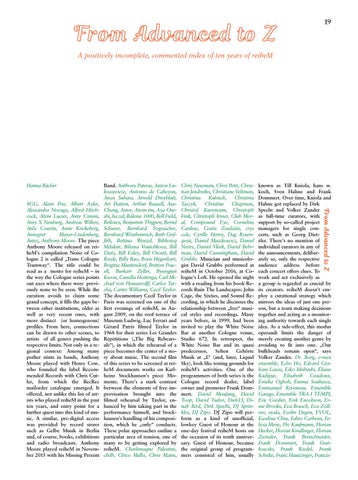 A positively incomplete, commented index of ten years of reiheM

From Advanced to Z

8GG, Alain Pire, Albert Ayler, Alessandra Novaga, Alfred Hitchcock, Alvin Lucier, Amy Cimini, Amy X Neuburg, Andreas Willers, Anla Courtis, Anne Krickeberg, Annegret Mayer-Lindenberg, Antez, Anthony Moore. The piece Anthony Moore released on reiheM’s compilation Noise of Cologne 2 is called „Trans Cologne Tramway“. The title could be read as a motto for reiheM – in the way the Cologne series points out axes where there were previously none to be seen. While the curation avoids to claim some grand concept, it fills the gaps between other institutions, older as well as very recent ones, with more distinct (or homogenous) profiles. From here, connections can be drawn to other scenes, to artists of all genres pushing the respective limits. Not only in a regional context: Among many pother stints in bands, Anthony Moore played with Henry Cow, who founded the label Recommended Records with Chris Cutler, from which the RecRec mailorder catalogue emerged. It offered, not unlike this list of artists who played reiheM in the past ten years, and entry point for a further quest into this kind of music. A similar, pre-digital access was provided by record stores such as Gelbe Musik in Berlin and, of course, books, exhibitions and radio broadcasts. Anthony Moore played reiheM in November 2015 with his Missing Present