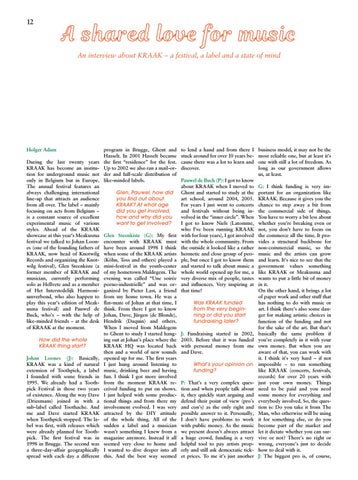 An interview about KRAAK – a festival, a label and a state of mind

Holger Adam During the last twenty years KRAAK has become an institution for underground music not only in Belgium but in Europe. The annual festival features an always challenging international line-up that attracts an audience from all over. The label – mainly focusing on acts from Belgium – is a constant source of excellent experimental music of various styles. Ahead of the KRAAK showcase at this year’s Meakusma festival we talked to Johan Loones (one of the founding fathers of KRAAK, now head of Knotwilg Records and organizing the Knotwilg festival), Glen Steenkiste (a former member of KRAAK and musician, currently performing solo as Hellvete and as a member of Het Interstedelijk Harmoniumverbond, who also happen to play this year’s edition of Meakusma festival) and Pauwel de Buck, who’s – with the help of like-minded friends – at the desk of KRAAK at the moment. How did the whole KRAAK thing start? Johan Loones ( J): Basically, KRAAK was a kind of natural extension of Toothpick, a label I founded with some friends in 1995. We already had a Toothpick Festival in those two years of existence. Along the way Dave (Driesmans) joined in with a sub-label called Toothache. And me and Dave started KRAAK when Toothpick stopped. The label was first, with releases which were already planned for Toothpick. The first festival was in 1998 in Brugge. The second was a three-day-affair geographically spread with each day a different

program in Brugge, Ghent and Hasselt. In 2001 Hasselt became the first “residence” for the fest. Up to 2002 we also ran a mail-order and full-scale distribution of like-minded labels. Glen, Pauwel, how did you find out about KRAAK? At what age did you get involved, how and why did you want to get involved? Glen Steenkiste (G): My first encounter with KRAAK must have been around 1998 I think when some of the KRAAK artists (Köhn, Toss and others) played a mini-festival in the youth-center of my hometown Maldegem. The evening was called “Une soirée porno-industrielle” and was organized by Pieter Last, a friend from my home town. He was a flat-mate of Johan at that time, I think. From there I got to know Johan, Dave, Jürgen (de Blonde), Hendrik (Daquin) and others. When I moved from Maldegem to Ghent to study I started hanging out at Johan’s place where the KRAAK HQ was located back then and a world of new sounds opened up for me. The first years I just hung around listening to music, drinking beer and having fun. I think I got more involved from the moment KRAAK received funding to put on shows. I just helped with some productional things and from there my involvement evolved. I was very attracted by the DIY attitude of the whole thing. All of the sudden a label and a musician wasn’t something I knew from a magazine anymore. Instead it all seemed very close to home and I wanted to dive deeper into all this. And the best way seemed

to lend a hand and from there I stuck around for over 10 years because there was a lot to learn and discover. Pauwel de Buck (P): I got to know about KRAAK when I moved to Ghent and started to study at the art school, around 2004, 2005. For years I just went to concerts and festivals without being involved in the “inner circle”. When I got to know Niels (Latomme, who I’ve been running KRAAK with for four years), I got involved with the whole community. From the outside it looked like a rather hermetic and close group of people, but once I got to know them and started to talk about music a whole world opened up for me, a very diverse mix of people, tastes and influences. Very inspiring at that time! Was KRAAK funded from the very beginning or did you start fundraising later? J: Fundraising started in 2002, 2003. Before that it was funded with personal money from me and Dave. What’s your opinion on funding? P: That’s a very complex question and when people talk about it, they quickly start arguing and defend their point of view (pro’s and con’s) as the only right and possible answer to it. Personally, I don’t have problems to work with public money. As the music we present doesn’t always attract a huge crowd, funding is a very helpful tool to pay artists properly and still ask democratic ticket prices. To me it’s just another

business model, it may not be the most reliable one, but at least it’s one with still a lot of freedom. As long as our government allows us, at least. G: I think funding is very important for an organization like KRAAK. Because it gives you the chance to step away a bit from the commercial side of things. You have to worry a bit less about whether you’re breaking even or not, you don’t have to focus on the commerce all the time. It provides a structural backbone for non-commercial music, so the music and the artists can grow and learn. It’s nice to see that the government values something like KRAAK or Meakusma and wants to put a little bit of money in it. On the other hand, it brings a lot of paper work and other stuff that has nothing to do with music or art. I think there’s also some danger for making artistic choices in function of the funding and not for the sake of the art. But that’s basically the same problem if you’re completely in it with your own money. But when you are aware of that, you can work with it. I think it’s very hard – if not impossible – to run something like KRAAK (concerts, festivals, records) for over 20 years with just your own money. Things need to be paid and you need some money for everything and everybody involved. So, the question is: Do you take it from The Man, who otherwise will be using it for something else, or do you become part of the market and let it dictate whether you can survive or not? There’s no right or wrong, everyone’s just to decide how to deal with it. J: The biggest pro is, of course,