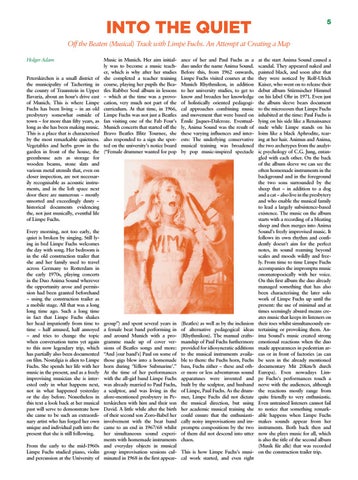 Off the Beaten (Musical) Track with Limpe Fuchs. An Attempt at Creating a Map Holger Adam

Music in Munich. Her aim initially was to become a music teacher, which is why after her studies she completed a teacher training course, playing her pupils the Beatles Rubber Soul album in lessons – which at the time was a provocation, very much not part of the curriculum. At that time, in 1966, Limpe Fuchs was not just a Beatles fan visiting one of the Fab Four’s Munich concerts that started off the Bravo Beatles Blitz Tournee, she also responded to a sign she spotted on the university’s notice board (“Female drummer wanted for pop

ance of her and Paul Fuchs as a duo under the name Anima Sound. Before this, from 1962 onwards, Limpe Fuchs visited courses at the Munich Rhythmikon, in addition to her university studies, to get to know and broaden her knowledge of holistically oriented pedagogical approaches combining music and movement that were based on Émile Jaques-Dalcroze. Eventually, Anima Sound was the result of these varying influences and interests: The underlying conservative musical training was broadened by pop music-inspired spectacle

group”) and spent several years in a female beat band performing in and around Munich with a programme made up of cover versions of Beatles songs and more: “And [our band’s] Paul on some of those gigs blew into a homemade horn during ‘Yellow Submarine’.” At the time of her performances with the all-girl band Limpe Fuchs was already married to Paul Fuchs, a sculptor, and was living in the afore-mentioned presbytery in Peterskirchen with him and their son David. A little while after the birth of their second son Zoro-Babel her involvement with the beat band came to an end in 1967/68 whilst her simultaneous sound experiments with homemade instruments From the early to the mid-1960s and everyday objects in musical Limpe Fuchs studied piano, violin group improvisation sessions culand percussion at the University of minated in 1968 in the first appear-

(Beatles) as well as by the inclusion of alternative pedagogical ideas (Rhythmikon). The manual craftsmanship of Paul Fuchs furthermore provided for idiosyncratic additions to the musical instruments available to them: the Fuchs horn, Fuchs bass, Fuchs zither – these and other more or less adventurous sound apparatuses were invented and built by the sculptor, and husband of Limpe, Paul Fuchs. As the drummer, Limpe Fuchs did not dictate the musical direction, but using her academic musical training she could ensure that the enthusiastically noisy improvisations and impromptu compositions by the two of them did not descend into utter chaos.

Peterskirchen is a small district of the municipality of Tacherting in the county of Traunstein in Upper Bavaria, about an hour’s drive east of Munich. This is where Limpe Fuchs has been living – in an old presbytery somewhat outside of town – for more than fifty years, as long as she has been making music. This is a place that is characterised by the most remarkable quietness. Vegetables and herbs grow in the garden in front of the house, the greenhouse acts as storage for wooden beams, stone slats and various metal utensils that, even on closer inspection, are not necessarily recognisable as acoustic instruments, and in the loft space next door there are numerous – mostly unsorted and exceedingly dusty – historical documents evidencing the, not just musically, eventful life of Limpe Fuchs. Every morning, not too early, the quiet is broken by singing. Still lying in bed Limpe Fuchs welcomes the day with song. Her bedroom is in the old construction trailer that she and her family used to travel across Germany to Rotterdam in the early 1970s, playing concerts in the Duo Anima Sound wherever the opportunity arose and permission had been granted beforehand – using the construction trailer as a mobile stage. All that was a long long time ago. Such a long time in fact that Limpe Fuchs shakes her head impatiently from time to time – half amused, half annoyed – and tries to change the topic when conversation turns yet again to this now legendary trip, which has partially also been documented on film. Nostalgia is alien to Limpe Fuchs. She spends her life with her music in the present, and as a freely improvising musician she is interested only in what happens next, not in what happened yesterday or the day before. Nonetheless in this text a look back at her musical past will serve to demonstrate how she came to be such an extraordinary artist who has forged her own unique and individual path into the present that she is still following.

This is how Limpe Fuchs’s musical work started, and even right

at the start Anima Sound caused a scandal. They appeared naked and painted black, and soon after that they were noticed by Rolf-Ulrich Kaiser, who went on to release their debut album Stürmischer Himmel on his label Ohr in 1971. Even just the album sleeve bears document to the microcosm that Limpe Fuchs inhabited at the time: Paul Fuchs is lying on his side like a Renaissance nude while Limpe stands on his loins like a black Aphrodite, tearing at her hair. Animus and Anima, the two archetypes from the analytic psychology of C.G. Jung, entangled with each other. On the back of the album sleeve we can see the often homemade instruments in the background and in the foreground the two sons surrounded by the sheep that – in addition to a dog and a cat – also live in the presbytery and who enable the musical family to lead a largely subsistence-based existence. The music on the album starts with a recording of a bleating sheep and then merges into Anima Sound’s freely improvised music. It follows its own rhythm and confidently doesn’t aim for the perfect notes, its sound roaming beyond scales and moods wildly and freely. From time to time Limpe Fuchs accompanies the impromptu music onomatopoeically with her voice. On this first album the duo already managed something that has also been characterising the later solo work of Limpe Fuchs up until the present: the use of minimal and at times seemingly absurd means creates music that keeps its listeners on their toes whilst simultaneously entertaining or provoking them. Anima Sound’s music created strong emotional reactions when the duo made appearances in pedestrian areas or in front of factories (as can be seen in the already mentioned documentary Mit 20km/h durch Europa). Even nowadays Limpe Fuchs’s performances touch a nerve with the audiences, although the reactions mostly range from quite friendly to very enthusiastic. Even untrained listeners cannot fail to notice that something remarkable happens when Limpe Fuchs makes sounds appear from her instruments. Both back then and now she plays music for all, which is also the title of the second album (Musik für alle) that was recorded on the construction trailer trip. 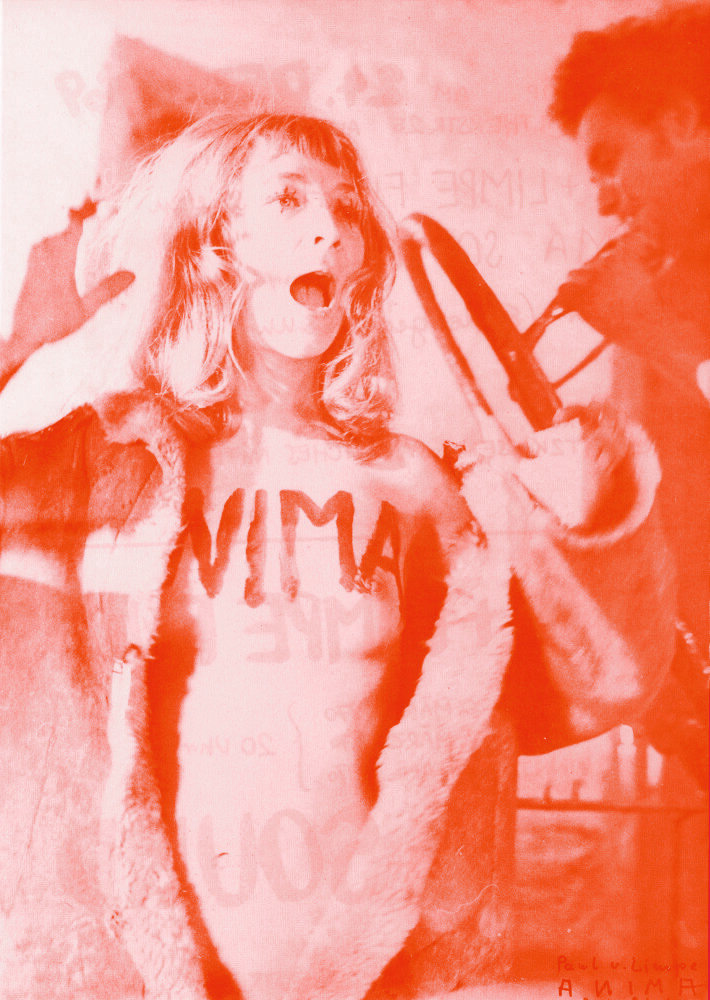 Off the Beaten (Musical) Track with Limpe Fuchs. An Attempt at Creating a Map By Holger Adam 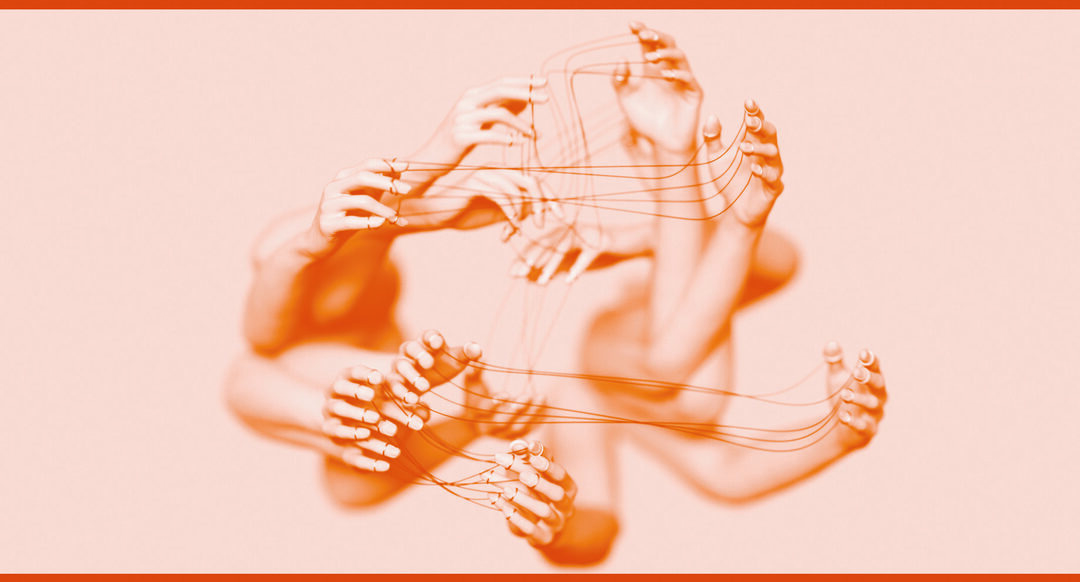 Favourite Female Electronic Musicians and Where to Find Them. A Personal Report By Sonia Güttler