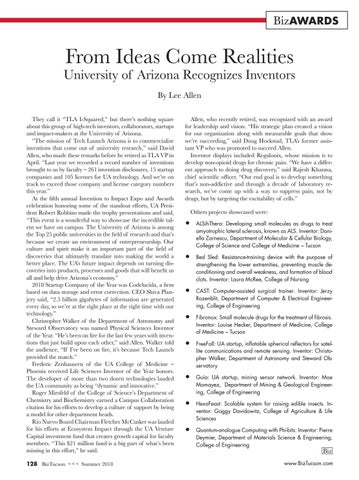 University of Arizona Recognizes Inventors By Lee Allen They call it “TLA I-Squared,” but there’s nothing square about this group of high-tech inventors, collaborators, startups and impact-makers at the University of Arizona. “The mission of Tech Launch Arizona is to commercialize inventions that come out of university research,” said David Allen, who made these remarks before he retired as TLA VP in April. “Last year we recorded a record number of inventions brought to us by faculty – 261 invention disclosures, 15 startup companies and 105 licenses for UA technology. And we’re on track to exceed those company and license category numbers this year.” At the fifth annual Invention to Impact Expo and Awards celebration honoring some of the standout efforts, UA President Robert Robbins made the trophy presentations and said, “This event is a wonderful way to showcase the incredible talent we have on campus. The University of Arizona is among the Top 25 public universities in the field of research and that’s because we create an environment of entrepreneurship. Our culture and spirit make it an important part of the field of discoveries that ultimately translate into making the world a better place. The UA’s future impact depends on turning discoveries into products, processes and goods that will benefit us all and help drive Arizona’s economy.” 2018 Startup Company of the Year was Codelucida, a firm based on data storage and error correction. CEO Shiva Planjery said, “2.5 billion gigabytes of information are generated every day, so we’re at the right place at the right time with our technology.” Christopher Walker of the Department of Astronomy and Steward Observatory was named Physical Sciences Inventor of the Year. “He’s been on fire for the last few years with inventions that just build upon each other,” said Allen. Walker told the audience, “If I’ve been on fire, it’s because Tech Launch provided the match.” Frederic Zenhausern of the UA College of Medicine – Phoenix received Life Sciences Inventor of the Year honors. The developer of more than two dozen technologies lauded the UA community as being “dynamic and innovative.” Roger Miesfeld of the College of Science’s Department of Chemistry and Biochemistry earned a Campus Collaboration citation for his efforts to develop a culture of support by being a model for other department heads. Rio Nuevo Board Chairman Fletcher McCusker was lauded for his efforts at Ecosystem Impact through the UA Venture Capital investment fund that creates growth capital for faculty members. “This $21 million fund is a big part of what’s been missing in this effort,” he said. 128 BizTucson

Allen, who recently retired, was recognized with an award for leadership and vision. “His strategic plan created a vision for our organization along with measurable goals that show we’re succeeding,” said Doug Hockstad, TLA’s former assistant VP who was promoted to succeed Allen. Inventor displays included Regulonix, whose mission is to develop non-opioid drugs for chronic pain. “We have a different approach to doing drug discovery,” said Rajesh Khanna, chief scientific officer. “Our end goal is to develop something that’s non-addictive and through a decade of laboratory research, we’ve come up with a way to suppress pain, not by drugs, but by targeting the excitability of cells.” Others projects showcased were: