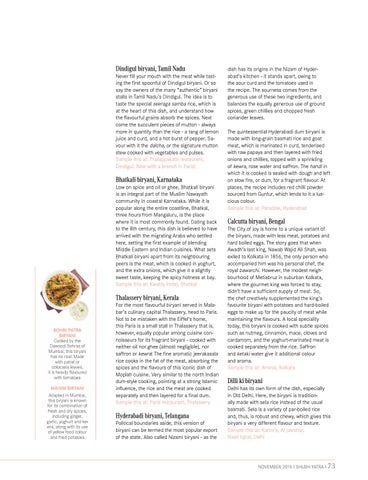 Never fill your mouth with the meat while tasting the first spoonful of Dindigul biryani. Or so say the owners of the many “authentic” biryani stalls in Tamil Nadu’s Dindigul. The idea is to taste the special seeraga samba rice, which is at the heart of this dish, and understand how the flavourful grains absorb the spices. Next come the succulent pieces of mutton - always more in quantity than the rice - a tang of lemon juice and curd, and a hot burst of pepper. Savour with it the dalcha, or the signature mutton stew cooked with vegetables and pulses. Sample this at: Thalappakatti restaurant, Dindigul. Now with a branch in Paris!

Low on spice and oil or ghee, Bhatkali biryani is an integral part of the Muslim Nawayath community in coastal Karnataka. While it is popular along the entire coastline, Bhatkal, three hours from Mangaluru, is the place where it is most commonly found. Dating back to the 8th century, this dish is believed to have arrived with the migrating Arabs who settled here, setting the first example of blending Middle Eastern and Indian cuisines. What sets Bhatkali biryani apart from its neighbouring peers is the meat, which is cooked in yoghurt, and the extra onions, which give it a slightly sweet taste, keeping the spicy hotness at bay. Sample this at: Kwality Hotel, Bhatkal

Bohri patra biryani Cooked by the Dawoodi Bohras of Mumbai, this biryani has no rice! Made with patrel or colocasia leaves, it is heavily flavoured with tomatoes mahim biryani Adapted in Mumbai, this biryani is known for its combination of fresh and dry spices, including ginger, garlic, yoghurt and kewra, along with its use of yellow food colour and fried potatoes

For the most flavourful biryani served in Malabar’s culinary capital Thalassery, head to Paris. Not to be mistaken with the Eiffel’s home, this Paris is a small stall in Thalassery that is, however, equally popular among cuisine connoisseurs for its fragrant biryani - cooked with neither oil nor ghee (almost negligible), nor saffron or kewra! The fine aromatic jeerakasala rice cooks in the fat of the meat, absorbing the spices and the flavours of this iconic dish of Moplah cuisine. Very similar to the north Indian dum-style cooking, pointing at a strong Islamic influence, the rice and the meat are cooked separately and then layered for a final dum. Sample this at: Paris restaurant, Thalassery

Political boundaries aside, this version of biryani can be termed the most popular export of the state. Also called Nizami biryani - as the

dish has its origins in the Nizam of Hyderabad’s kitchen - it stands apart, owing to the sour curd and the tomatoes used in the recipe. The sourness comes from the generous use of these two ingredients, and balances the equally generous use of ground spices, green chillies and chopped fresh coriander leaves. The quintessential Hyderabadi dum biryani is made with long-grain basmati rice and goat meat, which is marinated in curd, tenderised with raw papaya and then layered with fried onions and chillies, topped with a sprinkling of kewra, rose water and saffron. The handi in which it is cooked is sealed with dough and left on slow fire, or dum, for a fragrant flavour. At places, the recipe includes red chilli powder sourced from Guntur, which lends to it a luscious colour. Sample this at: Paradise, Hyderabad

The City of Joy is home to a unique variant of the biryani, made with less meat, potatoes and hard boiled eggs. The story goes that when Awadh’s last king, Nawab Wajid Ali Shah, was exiled to Kolkata in 1856, the only person who accompanied him was his personal chef, the royal bawarchi. However, the modest neighbourhood of Metiabruz in suburban Kolkata, where the gourmet king was forced to stay, didn’t have a sufficient supply of meat. So, the chef creatively supplemented the king’s favourite biryani with potatoes and hard-boiled eggs to make up for the paucity of meat while maintaining the flavours. A local speciality today, this biryani is cooked with subtle spices such as nutmeg, cinnamon, mace, cloves and cardamom, and the yoghurt-marinated meat is cooked separately from the rice. Saffron and ketaki water give it additional colour and aroma. Sample this at: Aminia, Kolkata

Delhi has its own form of the dish, especially in Old Delhi. Here, the biryani is traditionally made with sela rice instead of the usual basmati. Sela is a variety of par-boiled rice and, thus, is robust and chewy, which gives this biryani a very different flavour and texture. Sample this at: Karim’s, Al Jawahar, Nasir Iqbal, Delhi 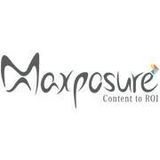