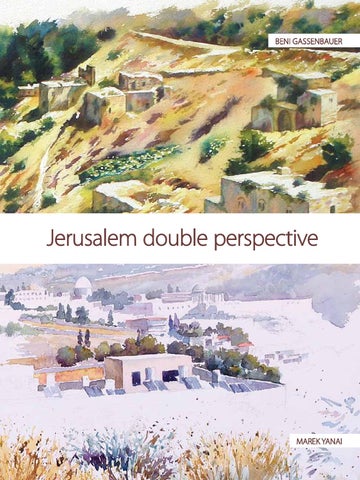 T‫ ‏‬hese thoughts arise from a conversation which took place in the studio of Marek Yanai in the artist’s workshops in Talpiot, a characteristic Jerusalem site. In our talk we chose to study the link between the Jerusalem artists- Marek Yanai and Beni Gassenbauer and their connection to Yosef Hirsh. Hirsh, an artist and lecturer who is associated to the Jerusalem expressionist school, lived and taught in the city, yet it is difficult to link him to the city. He did not paint its landscapes nor its people. Rather he was deeply rooted in the European pictorial tradition. He depicted portraits and still lifes, while relying on the writings of Goethe and Heinrich Boll in search of a deeper meaning behind the painted object. To his numerous students in Jerusalem he was a valued teacher with a unique teaching method. A lecturer who loved to teach in unconventional methods, he opened before his students new paths for personal expression. He was an inspiring teacher not strict but poignant in expressing his thoughts and his artistic ideas. Beni and Marek, as Hirsh’s followers, learned from this master of drawing to search for a meaning behind the painted object through a process of fragmentation and rearrangement of its parts (the poetry of vision). Each artist perceives this in a different way. Beni- in his tree paintings focuses on tree ‘joints’ as giving life to the Jerusalem Pine-tree and its pine forests, and in the ‘intersections’ of Jerusalem alleys as the ‘arteries’ of the people living in the city. Marek focuses our attention in seemingly fragmented objects which would appear to the viewer as a trompe l’oeil’- water tanks, electricity boxes or even a cat. But unlike those in Hirsh’s paintings these lack a symbolical meaning, but just try to catch our gaze and create a focal point from which the painting should be ‘read’. In terms of color, Hirsh preferred the use of single color modulation to rich coloring. His reductive approach to color was not accepted by his two pupils. Marek connects the viewer to ‘reality’ through the use of large transparent patches of color which build areas but do not give the objects a true concreteness. The patches or facets forming the object have an inner rhythm, which one can find also in Hirsh’s works. But in Marek’s watercolors this is more refined and introvert so as not to defy the viewer’s sight. Unlike Hirsh he does not continue to fragmentize the object’s color but uses the colored fragments to build new patches, areas and subjects- a hill or the face of a man. Beni is estranged to Hirsh’s abstract fragmentation of color. The sheet of paper is full, the colors strong and vivid. But like Hirsh he searches for the right shade of color to signal the object- blue door, green gate or red geranium plant- behind which opens a new ‘world’- a Jerusalem courtyard, an unknown alley or a rich Templar House. Hirsh did not depict landscapes; rather he imagined them and recreated them each time anew in words as if he were an author or a composer. In Beni’s and Marek’s works the landscape seem to be at a standstill- they lack people or animals and the clouds are a rarity. Everything is organized meticulously as in a ‘classical’ composition. The slow inner movement of the hills, the falling stone walls and the oblique trees, create a peaceful atmosphere. A lyrical poem, their work would seem to betray something quintessential in the Jerusalem spirit- a search for something intimate and humane. In the words of the poet ‘man has to acknowledge his true proportion and perceive time without it taking control of him’ (Aristotle). Matsart Auctioneers is proud to host Marek Yanai and Beni Gassenbauer in its Tel-Aviv gallery for a joint exhibition which will shed light on their art and on their Jerusalem. Marek Yanai German Colony, Oil on canvas, 130 x 89 cm

An invitation to gaze at watercolors is an invitation to wander. The eye wanders back and forth from one area to another, from the whiteness of the paper to the spot of paint, and within the spots - in and out of the shallow depth of the skins of paint. Each touch of the brush, each touch on touch, sketches not only the depiction of the house, mountain or object, but also the way that the brush has moved. When it’s a double invitation, an exhibition by two, things are even more sharpened. The wandering widens and the eye formulates one experience also according to its experience of the other. When the two are Marek Yanai and Beni Gassenbauer, good friends, once teacher and pupil, even more so. The same city, the same landscapes, and almost the same angle of view, allow us to give ourselves over to looking at one and the other and to distinguish each one’s special way of working. While Beni leads us with confidence, Marek makes only suggestions. With one, the whiteness of the paper bears witness to a spot of light; with the other it opens gaps of wandering between the spots. Beni Gassenbauer, an ex-dentist, doesn’t lay down the tool of his precise craft. With maximum attention he gives us the pleasure of being in the presence of beauty. The views he has discovered are presented to our eyes as an artist’s gift. Here is the open gate of house number 6, we can go to the end of the path and back. The anemones expect us to take hold of them and lift them to our nostrils. The distant landscapes are also within the reach of hand and eye. The ability to touch doesn’t disappear, all the way through the width, depth and surface of the picture. With Marek, those same houses planted on the slope become a vision only. Dark areas are interpreted by us as shadows and thereby define the adjacent spot as nothing less than the wall of the house. The weave of shadows, near and far, creates a layout of brushstrokes dependent on one another. Only our act of connection bestows on them their whole form. So it is in the wrinkles of the figure and in the folds of the hills. The awareness of the two artists of the act of painting is also shown with two faces. Beni’s pictures proclaim the victory of the eye. Nothing is missing. Every detail is caught in all its qualities, and every texture, light and weave is reconstructed with success. The row of palm trees, the array of almond trees or the group of pines await us there, at the place where the painter experienced them. This willing dedication to the view of nature contains within itself the belief that beauty is embodied in the objects themselves. That our world contains views that are worth experiencing, that the artist through his powers of sight and his painting, is capable of bestowing them as a gift. With Marek, a sense of ‘artistic freedom’ creeps in. The touches of water flutter and are busy with the internal dialogue amongst themselves. The painter leads and expresses and mainly organizes. The doors of the entrance hall do not reveal a view of the courtyard to whoever is descending the steps. The white area of the outside and its direct continuation in the wide streak of light on the floor creates a ‘pillar’ that separates and mainly leaves us in the narrow space of the stairwell, demanding of us to occupy ourselves with the system of coordination of the vertical and horizontal lines and the diagonal of the banister. The oil painting emphasizes the power and the authority of the artist to organize even more clearly. The window frame on the right, the bowl of fruit, the apple, the candlestick and the book, are all precisely laid out in the points of opening of the woven pattern beneath them. The window bars too lose their iron actuality and here become a painter’s grid. A yardstick to measure the objects around it. No sky, treetop or cloud will appear beyond it and disturb its geometric cleanness. Did we say two artists? Or maybe two faces of the act of painting, and mainly two of experiencing reality and through them “catching” beauty .