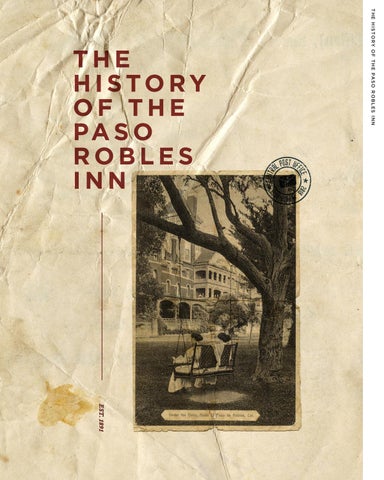 THE HISTORY OF THE PA S O ROBLES INN

THE PASO ROBLES INN HAS A RICH AND COLORFUL PLACE IN PASO ROBLES HISTORY SPANNING MORE THAN A CENTURY. El Paso de Robles, or “Pass of the Oaks,” was originally part of a 25,000 acre Spanish land grant that was purchased by James and Daniel Blackburn in 1857. The land was a rest stop for travelers of the Camino Real Trail, and was known for its mineral hot springs. In 1864, the first El Paso de Robles Hot Springs Hotel was constructed and featured a mineral hot springs bath house. The Southern Pacific Railroad reached Paso Robles in 1886 and was a turning point in the life of the Hot Springs Hotel, as well as the town of Paso Robles. With more visitors to the area, construction began on a magnificent new hotel in 1889, the same year that Paso Robles was incorporated as a city. The El Paso de Robles Hotel opened for business in 1891. The new hotel was 3 stories tall and built of solid masonry, set off by sandstone arches. This ensured that the hotel was completely fireproof. The hotel featured parlors, separate men’s and women’s billiard rooms, reading rooms, club meeting rooms, a saloon, dining room, and a barber shop. In 1913, the world’s most well-known concert pianist and composer, Ignace Paderewski, visited the hotel. After 3 months of treatments at the hotel’s mineral hot springs for his arthritis, he resumed his concert tour. During the next 30 years, the hotel was visited by other notable figures, including boxing champion Jack Dempsey, US president Theodore Roosevelt, and actors Douglas Fairbanks, Boris Karloff, John Wayne, Bob Hope, and Clark Gable. When Major League baseball teams used Paso Robles as a spring training

home, the Pittsburgh Pirates and Chicago White Sox stayed at the hotel and soaked in the mineral hot springs to soothe tired muscles. In December of 1940, tragedy struck. A fire completely destroyed the “fire-proof ” hotel, with the exception of the ballroom building, which remains standing today. Guests staying the night escaped unharmed, although the night clerk who discovered the fire suffered a fatal heart attack immediately after sounding the alarm. Within months after the blaze, plans for a new hotel to be built on the site were drawn up. The design was an entirely new concept: A Garden Inn - Hotel, designed to accommodate motoring travelers. By February 1942, construction was complete and the new Paso Robles Inn opened for business. Over the next 30 years, though few changes occurred at the hotel, the City of Paso Robles experienced significant growth. The area’s wine industry f lourished, the California Mid-State Fair expanded into a regional attraction, and Paso Robles’ reputation as a charming and friendly community grew. In early 1999, the Paso Robles Inn was purchased by Martin Resorts, a local family-owned hotel group. The Martins immediately embarked on a multi-phase plan to revitalize the Inn and restore its turn-of-the-century grandeur. The elegant historic Ballroom was retrofitted, restored, and reopened for large parties with up to 250 guests. Additionaly, the Steakhouse opened in place of the Hot Springs Grill. A devastating 6.5 earthquake shook Paso Robles in 2003. The damage required some new construction, including 18 new deluxe spa suites. Thanks to retrofitting in 2000, the historic Grand Ballroom withstood the quake with almost no damage. Presently the Paso Robles Inn offers 98 rooms, The Steakhouse, a nostalgic 1940’s Coffee Shop, Cattlemen’s Lounge, event and meeting facilities and beautiful gardens. As a landmark in the community of Paso Robles, the Paso Robles Inn is continually improving the hotel and facilities to stay current with both travelers’ needs as well as the local community.

1886 T H E R A I L R OA D The Southern Pacific Railroad reached Paso Robles on October 31, 1886. The trainâ&amp;#x20AC;&amp;#x2122;s arrival was the turning point in the Blackburn and James brothers plan to develop both the hotel and the town of Paso Robles.

The El Paso de Robles Hotel burned to the ground on December 12, 1940.

THE MARTIN FA M I LY

6.5 earthquake shakes Paso Robles and damages the Inn. Pictured above, a scene from downtown Paso Robles in the aftermath of of the 2003 quake.

TODAY Today the Paso Robles Inn is a landmark in the midst of beautiful wine country on Californiaâ&amp;#x20AC;&amp;#x2122;s Central Coast.

A TR ADITION N O T WO R T H R E P E AT I N G On two occasions, guests have witnessed people riding their horses up the stairs to Cattlemen’s Lounge (this is strongly discouraged). 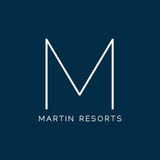